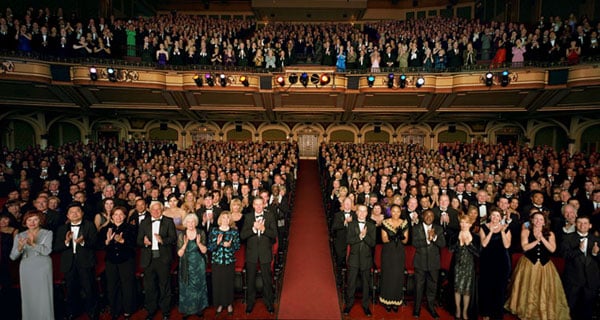 It’s often hard at this time of year, when the days are short, the errands before Christmas are many, the things to get done before the holiday season starts in earnest seem unending, and the prospect of another New Year looms dangerously close, to take the time to think about the theatrical highlights of the year that is about to end.

But not this year. No. This year there have been so many theatrical highs in London it is difficult to not think about them. And when one is asked to list the “ten best” of the year, it is very hard indeed.

So, I won’t do that. Well, not just that. Rather, I am going to mention the plays or musicals or theatrical events or performances which left the most lasting impression, the ones I think about often, the ones which have left a footprint in my consciousness.

It doesn’t really fit into any kind of category but John, the DV8 production which played and is still playing at the National, in the Lyttleton Theatre, was definitely the theatrical wonder of the year. Thought-provoking, harrowing, fundamentally real, technically intricate and self-evidently difficult, this was as remarkable and electrifying a piece of theatre as any I have ever seen. And once you see it, it becomes a part of you, haunting you, challenging you to rethink your assumptions and marvelling at the spirit of humankind. It is worthwhile in every way – if you haven’t seen it then make sure you do.

There have been a lot of stand-out and break-through performances this year, but, for me, the clear winner was Luke Kempner, whose one man show The Only Way Is Downton was a breathtaking tour de force of comic bliss. Funny, insightful, charming and savage, Kempner was fresh, inventive and original. Look out for his name in lights and if he graces any production with his presence, see it. He is a true star on the rise.

Jamie Lloyd is unbeatable in this race this year, simply because of the range of high quality work he has produced.  Assassins is a triumph and 2015 promises The Ruling Class, another new horizon.

Again, this year this seems a clear choice: Graham Hurman. He worked relentlessly to make the music in Stephen Ward work and now, with Cats, has shown a mastery of the material which does much to keep the pulse of the show thumping and thrilling. The West End is lucky to have him.

Simply for his work on All I Need Is The Girl from Gypsy, this accolade should go to Stephen Mear. But with Gypsy, Pajama Game and City of Angels all benefitting from his sure sense of style, impeccable judgment, and ability to find just the right steps and approach to bring bounce and irrefutable joy to musical numbers, he is the clear choice.

Best Design for a Play or Musical

Bob Crowley, hands down, for his terrific, evocative, and completely perfect set for the revival of Skylight. A masterpiece by anyone’s measure, and the perfect framework for the production. Absolute genius.

Best Lighting for a Play or Musical

And the prize goes to…no idea, because they were not specifically credited, but the lighting design in Golem was utterly extraordinary, and actually a true component of the theatricality and vision of the piece. Flawless and resonant.

Best performance by a male in a play

Richard Armitage’s John Proctor in The Crucible at the Old Vic was an astonishing achievement by any measure, not the least because it was so unexpected. There were many other marvellous performances by men this year, some in large parts, some in small, but Armitage’s Proctor was mesmerising, utterly believable and thoroughly compelling. And it has stayed with me, in a way that others have not. At his most convincing in the silences, the haunted looks and profound incomprehension of the fanatical lunacy around him, Armitage also managed the howls of outrage that mark out Proctor as an extraordinary man. A shattering portrait of pain and guilt.

Best performance by a female in a play

Linda Bassett’s turn as the simple, country housewife slowly succumbing to dementia in Visitors was, in a very strong year for actresses, the legendary crème de la crème. Utterly believable, completely engaging, riven with pain, fear and love, this was as honest, brave and touching a performance as one could hope to see. You can catch it now at the Bush – and you should. No one will ever be as good in this role in this country as Bassett is in this production.

Best ensemble performance in a play

Everyone in the remarkable A View From The Bridge at the Young Vic was perfectly cast in their role and every single person contributed, significantly, to the overall power of the production. The tense scene where many of the cast spoke in broken sentences and used silence to build a complex sense of impending doom was, frankly, astonishing. A superb, completely in-sync cast.

Best performance by a male in a musical

This is a dead heat in my mind: Tim Rogers for his superb Billy Bigelow in the small scale, but supremely captivating, Carousel at the Arcola; and Aaron Tveit’s unique take on John Wilkes Booth in the Menier Chocolate Factory’s Assassins. Two very different performances, but both unforgettable. Rogers captured the manly desperation of the love struck Billy with what seemed like consummate ease and his Soliloquy surely melted even the hardest of hearts. Tveit is immaculate in form, style and presentation as Booth and he captures the essence of the vainglorious, pretentious but seductive, bigot expertly. Both Rogers and Tveit provided the solid anchor for the shows in which they starred; very different performances. Both unforgettable.

Best performance by a female in a musical

This is hard. Imelda Staunton in Gypsy, Tamsin Carroll in Miss Saigon, Jenna Russell in Urinetown, Julie Atherton in Thérèse Raquin, Natalie Mendoza in Here Lies Love – what a year for vibrant, thrilling performances from women. But the performance that keeps surfacing in my mind, the one I wish I could go and see/hear again and again, is that of Scarlett Strallen as Cunegonda in the Menier Chocolate Factory’s Candide. Strallen was unfeasibly good – her vocal virtuosity in Glitter And Be Gay was astonishing, especially in view of the comic business she was doing while belting out perfect top notes. She certainly glittered, was gay, and gave a once-in-a-generation performance.

Best performance by an ensemble in a musical

Another hard field. But, for me, the hardworking company of Dirty Rotten Scoundrels were the musical ensemble of the year, not the least because the warring, mis-matched leads, Robert Lindsay and Rufus Hound, did so much to shatter any sense of company. But for sheer unrelenting energy, serious style, and endless chutzpah, the hard-working, all singing, smiling and dancing Dirty Rotten Scoundrels company were unparalleled.

Best turn by an Understudy

It is not always the case that the cover for a role on the West End is actually better suited, in terms of talent, skill and understanding, to the role; but so it was with Andy Conaghan, the cover for Rufus Hound’s Freddy in Dirty Rotten Scoundrels. Hound is a star, hence his casting. Conaghan, however, has a much better voice for the part and could act with real comic success, despite the lack of co-operation from Robert Lindsay. One of those (increasingly frequent in these days of “star” castings) occasions when the experience was infinitely for the better because the cover was on.

In alphabetical order, these are they: the reviews speak for themselves

10 best plays which played London in 2014 having originated from other homes:

In alphabetical order, these are they: the reviews speak for themselves.

In alphabetical order, these are they: the reviews speak for themselves.

Best work at the National Theatre in 2014

This was far from a great year for the National, and John and the James Plays aside, these were the best offerings of the year. In alphabetical order, the reviews speak for themselves.

The addition of the Sam Wanamaker Playhouse is paying real dividends for the Globe and 2014 was a good year. In alphabetical order, the reviews speak for themselves.

Not the best year for the Royal Court, 2071 being a truly low point in a lacklustre year of programming.

Still there was some compelling and challenging theatre in the mix: the reviews speak for themselves.

Birdland
The Wolf From The Door

On this one occasion, in order of greatness:

Next year is already shaping up to be a big year. Great news for lovers of theatre. Of what we know about, these are the productions I am most keen on seeing, in no particular order:

There is a lot to be excited about for theatre in London in 2015!

We’d like to know your thoughts on Stephen’s choices for 2014.