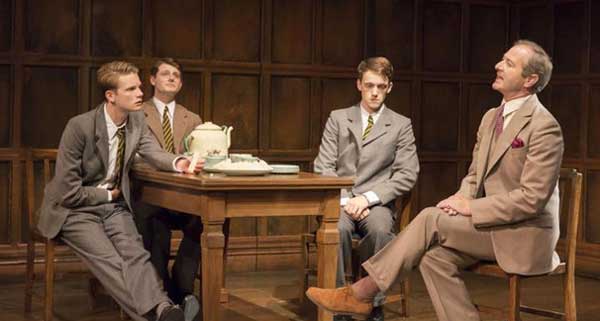 Another Country
Trafalgar Studios, now on tour of the UK
27 March 2014
5 Stars

One of the wonderful things about theatre is that it can often do several things at once: shine a light on a particular period in history; ostensibly deal in one topic while actually dealing with others; demonstrate relevancy to modern times; be something quite different from what is expected; be entertaining and enlightening; overwhelm with language and feeling.

Julian Mitchell’s beautifully written play, Another Country, now playing at the Trafalgar Studios (after seasons in Bath and Chichester) is one of those occasions.

Jeremy Herrin’s precise and insightful production is stylish, genuine and, despite being firmly steeped in the long ago 1930’s, is surprisingly modern in tone and resonance. It shimmers and sings with intense understanding, of a particular long ago time and the here and now in Britain.

This is the play which, thirty years ago, propelled the careers of Rupert Everett and Kenneth Branagh, later Daniel Day Lewis and Colin Firth. While none of Herrin’s cast seems in that league, each are more than capable and as an ensemble they work extremely well together, all pulsing with promise, anger, bewilderment and the fear of the future.

The play seeks to imagine the early schooling of Guy Burgess (here called Bennett) and provide an explanation for what may have made him turn traitor. It plays on his sexuality, the mis-treatment he received at school/university, his early exposure to Communist writing and an imagined exposure to subterfuge, espionage, blackmail and betrayal. It is easy to see why anyone – of any sexuality or temperament – would betray a country that allows its young male students to experience the torture of the traditions/rules/hierarchy/expectations of wealthy public school education.

Rob Callender (who could be the love child of Rupert Penry-Jones) starts a little shakily, but blossoms into a beguiling, enchanting and compelling Guy. He is flippant and sincere in equal measure. His triumph over Fowler when he threatens to blackmail all who have enjoyed the pleasures of his body is remarkable, as is the real pain he conveys when Fowler gets his revenge, destroying the love that matters to him and ensuring his vicious caning.

As the determinedly straight communist-in-making Judd, Will Attenborough (the latest in the Attenborough Dynasty) is excellent. He has the most didactic role in the piece but he manages that difficulty nicely, with real charm. He contributes to every effective moment in the evening, and the bond between him and Callender’s Guy is real, true and surprisingly understandable. His sense of the horror involved in becoming a prefect was perfectly judged.

Julian Wadham, the only cast member aged over 40, is spectacular as the pacifist paedophile who visits his nephew (Mark Donald’s creepy, ambitious and self-interested Devenish) embarrasses the establishment and, over cucumber sandwiches and muffins, engages with both Callender and Attenborough. It’s a startling, seductive and appallingly honest observation about power, privilege and flesh.

Bill Milner is perfect as the scared, desperate and, ultimately, vile Wharton, the first year fag who is treated with contempt by everyone except Attenborough. The moment when he betrays Callender to gain favour with Fowler is remarkable, and a product of Milner’s careful characterisation.

Rowan Polanski is exactly right as the ghastly, violent thug Fowler; Mark Quarterly is convincingly pained as the progressive House Leader, Barclay, who feels personally responsible for the atrocities committed on his watch; Cai Brigden makes an exact and conventional, but devious, Delahay.

The set, from Peter McKintosh, is a marvel of wood panelling, dormitory beds and cricket pitches. The sense of the Thirties is palpable. The scene changes are not as smooth as they might be, but surely they will improve with time.

In the programme for this production, Mitchell says:

“So I wrote my play partly to confute the experts, to say something about how much more important feelings are in a young person’s development than ideological ideas – especially feelings of inclusion. Partly also, I dare say, to take my own revenge on a middle-class education which had turned out to be anything but helpful to a writer in the rebellious 60s and 70s…but no one wanted to put it on. It was all about boys, there were no female parts, and no parts for a star actor. It was turned down by the National, the RSC, the Royal Court, and the commercial managements…and here we are, 80 years after the imaginary events of the play, 33 since I imagined them…But the public schools are flourishing as never before…will it always be so? Looks like it.”

Herrin completely understands that and his production is in terrific synchronicity with Mitchell’s vision.

A glorious revival of an under-rated masterpiece.