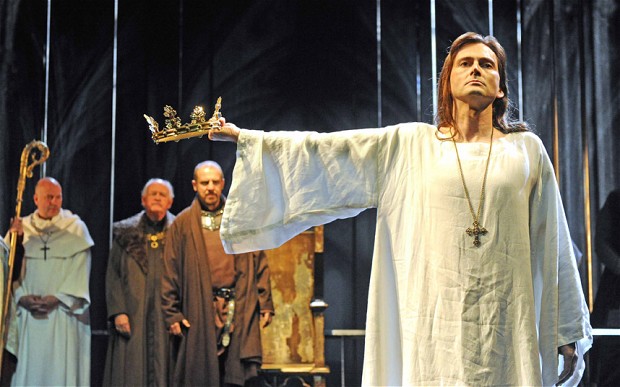 I cannot remember ever seeing a production of a play by William Shakespeare as exquisite as Gregory Doran’s wonderful Richard II which closed at the Royal Shakespeare Theatre tonight prior to its transfer for the London season at the Barbican. More thrilling, more exciting, more passionate, more hilarious, more magical, more captivating – yes, perhaps, but this is, by a long shot, the most exquisite.

And as it is the first production by Doran since he became Artistic Director of the RSC, it sets a very high bar.

The set by Stephen Brimson Lewis is simple and sublime, establishing precisely the mood and location of the action; Tim Mitchell’s lighting is evocative and adds to every scene; Paul Englishby’s music is astonishing, ravishing and perfect, setting, with unerring clarity, the balance between modernity and medieval which is the “time” for the whole production. It is a rare alignment of all the artistic elements necessary to create a complete and profundly satisfying whole.

This version opens in a cathedral with the coffin of the slain Gloucester centre stage, his desolate widow prone over the coffin. There are several moments of music which create the sense of pageantry, protocol, power and passion as the cast gathers behind and around the coffin. The stillness and acute sense of trepidation is palpable.

David Tennant arrives, with flowing regal locks, swishing his royal robes, his ear taken by the trio of young men who advise him, his eye taken by another, and with orb and sceptre gripped, he casually established this effeminate, troubled, unsure monarch, happy for the glamour and the pomp but unequal to the task of decisive regent.

From the very first words, there is a clarity at work with the text – this production tells the sad tale of Richard and Henry clearer and cleaner than any I have ever seen.

Tennant is quite miraculous – not a trace of his Doctor, his Hamlet, his Berowne or his Benedick – funny, clever, capricious, intense, flippant, calculating, remorseful and defeated – yet, not at all a mewling monarch or a weak weasly one.

His Richard II is out of his depth and trusting but secretive, his flaw is his inability to be tough. The moment where he kisses Aumerle (Oliver Rix in excellent form) is as poignant as anything in any Shakespearean play, coming, as it does, immediately before his fall and, therefore, representing the last moment of his own desire.

The casting is solid, almost everyone is perfect.

Michael Pennington is a tremendous Jon of Gaunt and his “This Sceptr’d Isle” speech quite remarkable. Jane Lapotaire is divine as the grieving Lady Gloucester and she makes every word in her scene pulse and vibrate with pain and meaning.

As Bolingbroke, Nigel Lindsay gives a solid performance, but not an especially vocally alive one; in particular, he misses entirely the emotional possibilities of his final scene. But, for the most part, his cantankerous bluster works well.

Emma Hamilton is the one flat note; her Queen does not leave any impression, but it scarcely matters.

There is a lot of detail in the direction, especially the interactions between the members of the various factions and the sense of the power held by Bushy, Bagot and Greene is clear and telling.

The renunciation scene is quite mesmerising and sees Tennant at his absolute best, fiery and fragile in equal measures.

Rightly, the cast received a standing ovation at the RST – an unusual sight at Stratford Upon Avon. This is a startlingly clear and quite gorgeous production of a play which can seem convoluted and which, really, has no heroes.