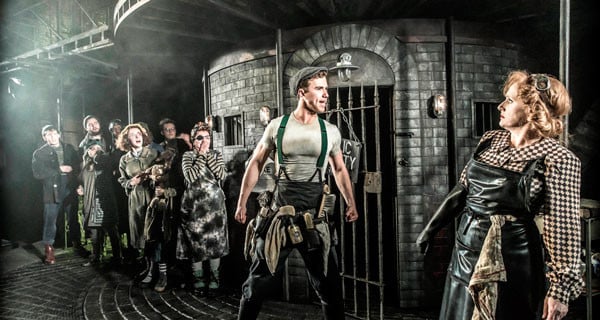 One of life’s truisms, completely unchallengeable, is that one should never go to the theatre if one is suffering from a migraine. The possibility that pain will dull the performance in one’s mind is too great; equally, the possibility that one will not be able to focus, to understand, to grasp the nuances of production and performance is overwhelming.

Turns out the truism might not be so rock solid after all.

Because tonight, I had a migraine but went to the theatre. The St James Theatre, to be precise, where the first professional production of Urinetown in the UK, a production helmed by Jamie Lloyd, is now in previews.

It cured my migraine.

This is a dazzling production, in every way. Indeed, it is clearly a better production than the work itself deserves.

Urinetown, with a book by Greg Kotis and a score from Mark Hollman and lyrics from both, began its life in 1999 and ended up on Broadway in 2001 where it won three Tony Awards. In one of those apparently curious twists of Tony Awards fate, it won Best Score, Book and Direction but lost Best Musical to Thoroughly Modern Millie.

It is one of those musicals with a cult following – those who love it are very vocal and sure of its greatness. For others, it is enjoyable and interesting while it is happening, but ultimately forgettable.

Jamie Lloyd’s vibrant and intensely detailed production allows everything good about the work of the creators to shine and covers over all of their failings. This is inspired, illuminating direction in every way.

It’s an odd piece. It tells the quirky tale of a world where water is so scarce that toilets are rationed and may only be used on payment of a significant fee. Those who cannot pay are sent to “Urinetown” a place no one has ever seen or come back from. There are two central groups – those that control and ration the water and those that suffer, scrabbling for the money to pee. Eventually, the scrabblers rebel and the consequences of that rebellion ultimately spells death for the entire community.

It makes Fiddler on the Roof or West Side Story seem positively jovial.

The hard satirical underbelly of the piece is alarming and all too fundamentally possible. And yet, despite the gravity of the subject matter, the material is essentially frothy and fun, poking fun in clever and interesting ways at the art form of Musical Theatre and particular examples of it, most notably Les Miserables.

Lloyd’s clear vision for the piece electrifies and unites the froth and the satire. The result is a visual and vocal feast, a series of wonderful characterisations, a lot of fun and some food for thought. There is nothing like this musical playing in the West End now: it is easily the best singing ensemble cast (apart from Candide which, alas, closes this week) working in the West End today; it is a better satire than Book Of Mormon (by a long shot); and it actually offers unexpected delights far greater than most of the long playing musicals.

Ann Yee’s choreography is endlessly inventive and surprising: just when you feel sure the musical beat will provide a kick-line, Yee has the cast do something else entirely. This wrong-footing of the audience is a central element to the joy of the piece and the choreography reflects that. It’s all precise and clear and really well executed by the cast. It’s one of those times when the dancing has as much to add to the piece as a whole as the book and music.

Alan Williams presides over the music and it is faultlessly played by a hardworking six piece orchestra. The balance is great and although the diction occasionally suffers, for the most part the singing is lucid, clear and happily in tune. The cast really know how to sing and dance and they give the score their all. It’s a complete joy to see these professionals sing and strut their stuff.

The casting – right across the board – is impeccable. There is not a wrong note here. Everyone can do what is asked of them and more. Everyone gets a moment and everyone shines in their own moment.

As Bobby Strong, Richard Fleeshman is utterly superb. He gets the almost comic book style exactly right, and his movie star looks combine with a flawless sense of the possibilities of the role to produce a characterisation that is rich and rewarding. Yes, he is the romantic lead, but equally he is the moral conscience of the piece and the sacrificial lamb. With his tight grey T-shirt and clear eyed adoration for Hope (a pitch perfect Rosanna Hyland) he sets the audience up perfectly for the moment of realisation about the truth behind “Urinetown”. The skill and talent he shows here was well hidden in Ghost – but it is wonderful to see him in full throttle mode. His Run Freedom Run is the highlight of the evening.

Unsurprisingly, Jenna Russell is delicious as the arch Keeper of the Pees, Penelope Pennywise, who will not bend the rules and who insists that all pay for the privilege to pee. It’s a garish and full blooded turn from Russell, full of comic delight and with her voice also in exhilarating mode.

Jonathan Slinger has not been better than he is here. As the wily, ruthless and sardonic Officer Lockstock he is the Dirty Harry of the latrines while at the same time engaging in a dialogue with the audience which shatters the Fourth Wall and creates much mirth. As his fellow baddie, Simon Paisley Day is faultless as the ghastly Caldwell B Cladwell, the man who has made a fortune from the rationing of water and the regulation of peeing. It’s a marvellously splenetic performance, chock full of vileness and vigour.

Karis Jack is simply delightful as Little Sally as is Marc Elliott as Mr McQueen. Mark Meadows is a joy as the simpering, fawning Senator Fipp and Madeleine Harland wrings every ounce of possibility from Soupy Sue. Especially memorable is the work of Cory English, who provides two contrasting characters (and more) with aplomb: his Old Man Strong is perfect and he is almost unrecognisable as the utterly different, malicious Hot Blades Harry.

As noted, everyone is excellent, but of the ensemble Alasdair Buchan, Chris Bennett and Julie Jupp really stand out.

Soutra Gilmour provides yet another astonishing set. The entire space at the St James Theatre has been altered to accommodate Gilmour’s vision and it is seriously worthwhile. The set itself evokes Les Miserables in a cunning way, but it’s best attribute is that it provides a solid, real framework for the bizarre and satirical action to work in. This highlights and underscores the satire quite beautifully. It is a perfect design for the production Lloyd had in mind and it is no small part of the overall success here.

The costumes are great – they evoke other musicals and give this dystopian world its shape. Adam Silverman’s lighting is moody, atmospheric and exactly right – the lighting of the blood-soaked scenes is particularly good.

Really, this production cements Lloyd’s reputation as a dynamic and thrilling young director. His vision here is glorious and he sees to it that it is properly and apparently effortlessly executed.

This could easily be the best New Musical of 2014. It will certainly take some topping.

Urinetown transfers to the Apollo Theatre from 29 September 2014. Book your ticket now!