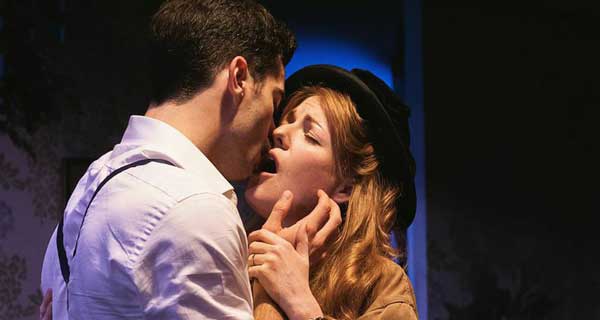 The Return Of The Soldier
Jermyn Street Theatre
4 September 2014

World War One is raging. British forces are entrenched in France, fighting Germany with blood, bone and breath. The British push forward, expecting death – and it comes to many of one particular squadron. But not to Captain Christopher Baldry, who might witness his fellows being slaughtered, but who is himself knocked out by a blast and awakens to…selective amnesia.

He thinks he is where he was, who he was, years earlier. He thinks he is in love with Margaret Allingham, a girl he chanced upon on Monkey Island and who stole his heart and inspired his musical passions. He has forgotten his current life, forgotten his wife and forgotten the love and tragedy he and his wife, Kitty, had endured together.

He writes to Margaret as he is prepared to be sent home to convalesce and tells her he is coming to her, so they can marry and be together forever. But she has married too, a good but passion-less marriage, and her sweet, bumbling, predictable husband, William, needs her. She is wracked with the possibility of the love she yearns for and the guilt and horror involved in betraying William. So goes to the Baldry estate to let Kitty, a stranger, know that the Captain is on his way home.

Such is the set-up for a new British musical, The Return Of The Soldier, now having its premiere production at the Jermyn Street Theatre.

Of course, there have been real successes too – Matilda, Charlie and the Chocolate Factory, Love Story, The Hired Man, The Go-Between, American Psycho to name a few.

Sometimes, it seems it is the audience expectation about what a musical will deliver which is the problem. As Sondheim wryly observes, people seem to demand a hum-hum-humable tune; others want big chorus numbers, dazzling costumes, marvellous sets, huge stars and glamour, glitz and gusto.

None of these preconditions are imposed upon dramas or comedies; audiences just take them at face value. It should be exactly the same with musicals.

If you want Guys And Dolls or Mamma Mia or Les Misérables, go see them. But if you want an exquisite, beautifully conceived piece of musical theatre which successfully evokes a particular historical period, tells a fabulous story full of twists and surprises, and which contains some achingly ethereal and enjoyable music, then go see The Return Of The Soldier while you can.

It is not flashy, there are no big chorus numbers, no tap routines, no jazzy band or orchestra and no television or film stars. But there is a lot of superb acting, wonderful storytelling through song, a few genuine show-stopping numbers, several really great vocalists and a genuine warmth and heart which is at times ethereal, at times nearly volcanic.

The piece is an adaptation of a book written during the First World War by Rebecca West. Book and Lyrics from Tim Sanders are excellent in every way, telling a complex story with panache and style, economically, and in a way that beautifully and completely anchors the action in the period. Charles Miller provides a score packed with melody, sadness and possibility; the title tune is particularly compelling. But there are many great numbers: Am I What You Are To Me, Leave Me For a Dead, The Little Things I Need, Somewhere Else, Head Master, To Be Adored, What Have I Become and I Know How This Ends. If there was a recording, I would be listening to them on a loop continuously.

Laura Pitt-Pulford is spectacularly good as Margaret. She is riven with fear and pain at the start, ecstatic in the sequences where she remembers her love for Baldry and then in the moment she snatches with him when she can, and then guilty, sad, but profoundly real, when his memories return and she faces her own husband and his generous forgiving of her betrayal. Pitt-Pulford is delightful in every respect and vocally she is perfectly suited to the demands of the score. She has the right energy and style for the period and that complete connection with the part and the audience that means that no one wants to clap in fear of missing a second of what she does. Terrific in every way.

Michael Matus gives a masterclass in musical theatre performance in his two, completely different roles – Margaret’s slow country bumpkin husband and Dr Anderson, who comes to fix Baldry’s selective amnesia. He is spot on as both. Sad, truthful, lonely and hopeful as the pickle-making man who needs his wife to knot his ties and make his breakfast; wry, fiercely intelligent, self-doubting and insightful as the ground breaking mind mender. It’s a beautiful pair of characters from an actor at the top of his game. And he sings effortlessly, with startlingly clear diction and glorious timbre.

Stewart Clarke is the amnesiac Baldry. He has no trouble with the dashing, manly soldier aspect of his role – he looks terrific and is especially good in the choreographed scenes of extreme sensuality when he and Margaret are remembering their love, at the same time but in different places. He even does a wet shirt routine in the second Act which made the young lady two seats from me sigh in wistful pleasure.

He has a solid voice, although he needs to work on the bottom of his range and he needs to be willing to sing with his own voice, not the twang which seems so sought after by singers these days. He is best at the belting upper end of his range, and some of his vocal work, especially in ensemble numbers, is thrilling. But, compared to Pitt-Pulford and Matus, he is sometimes too mannered to be as effective as he might be. Too many quick movements. But these are really quibbles – he has a commanding presence and his energy propels a deal of the action. The moment he recognises his past is done with grace and flair, and the final image of resolute acceptance of his fate, absolutely haunting.

Zoë Rainey has the most difficult role – Baldry’s wife who is dead inside and cold and cruel externally, a creature of class and snobbery and expectation. Rainey finds a way, though, to keep the audience interested despite Kitty’s excesses. So when the twist comes, it really packs a punch; and real sense is made of all that has come before. She sings glitteringly, with a sure smooth soprano.

As Jenny, Charlie Langham is required to do little more than observe, although she is clearly in love with Baldry too and she does get the key moment of the piece: when she reminds a reluctant Margaret of what Kitty has lost too. Langham has a pleasant, accessible voice of ready charm, but it could do with better support to ensure clarity and power. But her sense of her character was exact and in tune with the other woman. She gained confidence when she was not singing alone and the ensemble moments displayed her talents best: Now That I Know was just terrific.

Simon Lambert’s musical direction here is quite delicious, near perfect really. From the very first opening notes, the combination of Lambert on piano and a sensitively played Cello (Fraser Bowles, a last minute substitute, excellent tone throughout) instantly, completely, and meltingly establishes the haunting, ethereal tone. The concepts of memory and passion and confusion run as leitmotifs through Miller’s rich score, and Lambert gives each exactly the right weight, time and tone. And he makes sure that Matus’ comic turns are supported with sprightly catchy support.

There was little about the design (Simon Anthony Wells) which appealed; often the set got in the way of the fluidity behind Charlotte Westenra’s simple stroke direction. But there were no stupid concepts at play here, no tricks; everything, including some magical choreography from Matthew Cole, combined to tell this intense human story of love and the hideous carnage War inflicts on the human life and spirit.

The producers of this musical, a gorgeous, original gem, should be applauded for their faith in this work and the vision they had which gave it life. If only the National Theatre believed in musical theatre as these producers do.

Anyone who likes musical theatre should make it their business to see this production.