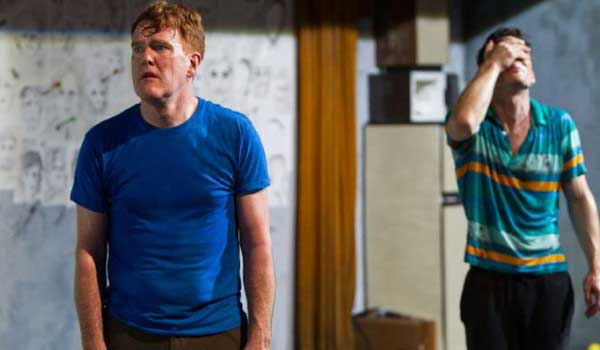 In his excellent essay, Desire and Mystery, Colm Tóibín says this about the work of Enda Walsh:

“His images are unpredictable, strange. None of his characters is sure what they are going to say next. Objects as much as words have a fitful, darting function. There are moments where it seems that everything is open to possibility, but then it seems that these moments are created so that they can be ambushed. The moments of possibility are limited and destroyed so that speech, action, thought and movement on the stage become frightening and futile, to be repeated again and again, part of a script, part of a maze of happenings with no exit and with the entrance blocked up or all but forgotten about…His characters live in a story of their own making which cannot be untold…Telling stories has maimed them. They wait then, as in Ballyturk, for the outsider to come and wake them, or at least prod them and unsettle them while they wander in their waking sleep…language is often, in his universe, also ready to rise up, to move towards some sonorous, quasi-religious state, the cadences unembarrassed by their own beauty.”

Enda Walsh’s premiere production of his own play, Ballyturk, is now playing at the Lyttelton Theatre and, in a very simple and utterly absorbing way, demonstrates why the National Theatre is so important. (Tóibín’s essay is in the programme)

Ballyturk is a remarkable play, a comic monstrosity which provides marvellous work for the three actors in the cast but which can mean nothing or everything to its audience. It is an experience, highly theatrical and original, but one which is as elusive as it is engaging. If someone tells you they know what the play is about be assured they have no idea.

The play occurs in a single room. At first, it seems not to have a door, but it turns out there are two, hidden away. Two men, nameless, 1 and 2, live in the room. They lead ridiculous lives inspired by old vaudeville routines; at times it seems they are playing out silent movies. At other times, they leap and cavort manically around the stage, taking refuge in odd points on the stage and playing a range of other characters they either know or have made up, perhaps the people they think live in the outside land. Sometimes they eavesdrop.

Then man number 3 arrives and everything changes. Tone, colour, and the sense of fate changes, as does the poetic grandeur of the language. One of 1 and 2 must leave the room and die. But the surprises don’t stop there.

In many ways, the experience is something like watching Waiting For Godot performed by Kenneth Williams and Michael Crawford, except that Godot turns up and it transpires he is a doleful creature, part X-Files’s The Smoking Man and part Tony Soprano. Which is really to say that it is absolutely like nothing you have ever seen on stage before.

It is electric in its theatrical challenge. As Tóibín says, Walsh creates moments simply to smash them; to befuddle expectations, to make you laugh and think. And wonder.

The cast is exceptionally good.

Stephen Rea is wonderful as the lugubrious Number 3. His sense of menace and poetry is delicious and he shatters the cosy hermit-like existence of the duo whose zany, Chaplinesque antics we have savoured.

Cillian Murphy is in genius physical comedy mode as the sprinting, jumping, knife-wielding female-tavern-impersonating Number 1. His eyes are haunted with pain, fear and hope and his wiry body trembles and shudders with all of the various demands of his character, the youngest, most needy of the duo. The sense of ritual he evokes while going through the pin-point precise comic routines is remarkable, as is the humanity with which he imbues every aspect of the silliness. He is astoundingly good.

So too is Mikel Murfi, who plays the more stoic and sensible Number 2, if that is something that can be said of a character who first appears clad only in crisp white underwear, covered in talcum powder and using a hand-held vacuum cleaner to clean up cornflakes from around Murphy’s feet. He is as deranged and beautifully human as he is silly and a marvellous mimic. His final sequences are more touching than could remotely be thought possible as the play’s first thirty minutes suggests.

These are three gifted actors at the top of their game, wholeheartedly embracing the challenges posed by Walsh’s text and directorial style.

Jamie Vartan’s design is fabulous: you never really know what you are looking at and this assists the whole point of Walsh’s writing. There is a marvellously exploding microwave and a wonderful fire in a cuckoo clock. And Helen Atkinson’s sound design means that the fourth member of the cast, a buzzing fly, gets proper prominence.

This is a wild, original and unexpected evening of theatrical extremism. You do not need to be able to work out what Walsh’s point is to have a wonderful time; indeed, trying to do that may hamper your enjoyment.

Let it wash over you and let the actors weave their magic. There is nothing like it on the West End stage.