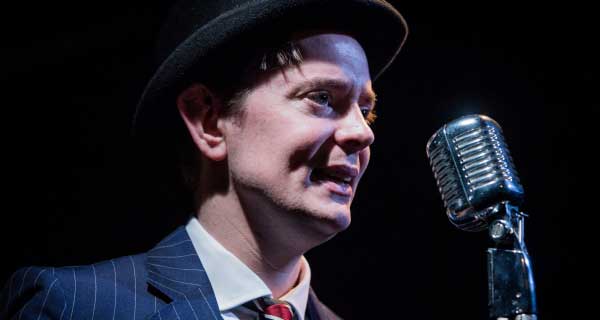 Imagine, if you can, an actor who is capable of channelling Kenneth Williams, David Niven, Rowan Atkinson and David Tennant all at the same time. An actor with impeccable comic timing, a real sense of the intimacy and warmth that can come from proper communion with the audience and the ability to turn from light humour to trenchant observation to shattering pain in an instant. An actor who can create good theatre. An actor who can deliver a well known song with flair and perfectly enunciated new lyrics. An actor with style and intelligence.

Then pop along to The Act, currently playing at Trafalgar Studios 2, and absorb the performance there given by Matthew Baldwin who, together with Thomas Hescott devised the piece; Hescott directs.

It is 70 minutes of theatrical wonder. An unqualified success.

And a haunting, sometimes excruciatingly painful to endure, tip-toe through the Tulips that surround the thorny subject of the decriminalisation of homosexuality in the UK and all that came with that.

The writing is deft, clever and sensitive.

The through thread is a truncated version of a House of Lords speech recommending the decriminalisation. Against that dispassionate, intellectual argument about a change in the law, Baldwin and Hescott juxtapose a series of vignettes which provide sharp counterpoints.

There is a tale of schoolboy love and humiliation – Baldwin tells this tale so well, so warmly, so tenderly it is difficult to watch. Every life has surely had an experience like this, of love dawning and exponentially accelerating only to be rebuffed.

There is a glimpse of life in a wilder, camper, counter-culture hidden gay club world with a ruling “Duchess” with a formidable tongue and an eye for talent.

There is a brutal section about a civil servant falling for “rough trade” and falling hard, giving all, being betrayed and then blackmailed and then prosecuted – but still, all the while, having nothing but love for Mr RT. Some of this was so raw, so real, so utterly truthful that one had to close one’s eyes during some sections: Baldwin’s skill was unerringly effective.

In a particularly clever sequence, Baldwin reads out a series of letters sent by the Civil Servant to Mr RT. They are vivid, stark, full of the pain of love. When he has to re-read one, out loud at his trial for Buggery, the effect is like being burnt alive. It’s searing, skilful work.

And there are scenes depicting the shallow unfulfilled lives of the “modern” gays, lives the Civil Servant and those like him made possible. But lives that bear no resemblance to theirs. Acerbic about the “relationships” of today, of the troubles, trivia and tiresomeness of the New Super Gays, Baldwin sums their lifestyles up: “It all seems pretty bloodless to me”.

This is a powerful piece of theatre, a meditation on the state of the homosexual in the UK in the last 50 or so years. But it is wrapped up and delivered like a perfectly prepared confection, such is Baldwin’s sheer skill and dazzling ability.