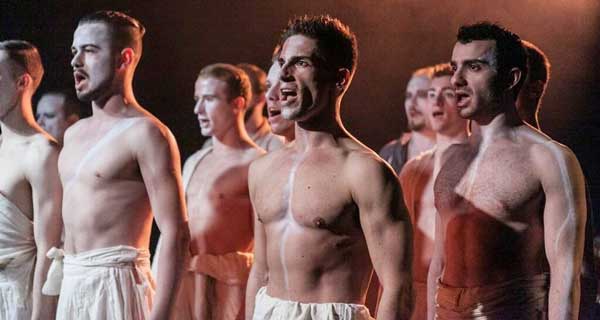 Princess Ida comes between Iolanthe and The Mikado in the list of the works of Gilbert and Sullivan and is less well known and loved than either. Pacific Overtures comes between A Little Night Music and Sweeney Todd in the list of works of Stephen Sondheim and, like Princess Ida, is unaccountably less well known and less loved than either of those great Sondheim works. Still, originally, it ran for 177 more performances than Merrily We Roll Along did on its first outing.

Which is a long-winded way of saying that Pacific Overtures is an oft overlooked gem. It has a marvellous, evocative, and reflective score and John Weidman’s book is stark, simple and very effective.

Now playing at the Union Theatre is a revival of this great piece helmed by Michael Strassen whose productions of Sondheim musicals at the Union (Assassins, Company) have been troubled, to be kind.

But here, there is no trouble. With one reservation, this is as good a production of Pacific Overtures as anyone is likely to see. It’s well cast, mostly well sung, beautifully, almost hypnotically, staged, full of drama and intrigue and there is a cohesiveness to everything that happens which produces the magic that only musical theatre can produce. Lessons are learnt and tunes are sung.

The reservation concerns the presentation. Taking a leaf out of Sasha Regan’s all-male Gilbert and Sullivan productions, the female characters here are played by young men, well boys really, in various states of undress. There is a kind of Lady-boy feel to the production which adds a sensual layer that the script and score does not call for; yet, it is not disastrous, merely distracting and…well, odd. Given that, unlike in Regan productions, these beautiful fey lads do not sing in their falsetto, the overwhelming impression is that this is a gay version of Pacific Overtures.

The programme suggests both a Butoh and Kabuki influence, rather than a specifically gay one, but neither of those forms requires so much male flesh to be on display. It might have been simpler to have called it “The All Male Pacific Overtures” because the sensibility at play here is not the traditional one. It’s not simply about culture clash – it’s also about sexuality, curiously.

Pacific Overtures is a very mature work, looking in microscopic detail at a moment when the world changed; when the island that was Nippon, a place where foreigners had been been prohibited for over 200 years, was dragged by the USA into the modern world of international diplomacy and trade.

Sondheim provides one of his richest and most sublime scores. Most of the music is haunting and impactful; all of it is essential to moving the plot forward and fleshing out characters and motivations. In one of his trademark manoeuvres, Sondheim provides a single song which pretty much encapsulates the running, jagged themes of the piece. Here it is Pretty Lady – as gorgeous and perfect a song as any Sondheim has written, and a perfect illustration of the clash of cultures and the pain that clash induces.

Richard Bates’ musical direction is first rate, and although some of the singing is too shouty (perhaps inevitable with a lusty group of lads on stage, but still occasionally annoying) by and large the score is well served. The orchestra, though small, is precise and full of gusto.

There are some truly outstanding performers too.

Oli Reynolds is exemplary as Kayama, the samurai who is promoted in order to save the ruling class from having to deal with the American fleet. He is marvellous at conveying the fear and horror of his situation, and he changes, subtly and with nuanced ease, as the story progresses. His is by far the most accomplished performance. His performance of A Bowler Hat is intensely moving.

As his wife, Tamate, Anthony Selwyn is quite amazing. He has very little to do, but he does it with exceptional skill and a true sense of style and drama. He plays other roles throughout the production, but it is his turn as Tamate which will haunt me for some time. Exquisite.

Many parts are played by many actors. The most impressive players, who acted and sang well whatever they did, were Joel Harper Jackson, Joel Baylis and (especially) Josh Andrews.

Ken Christiansen did a lot of good work as the Reciter, but slipped too quickly into shouting, which undercut the poignancy and impact of his role. His make-up,is especially terrific. Marc Lee Joseph was impressive as the Shogun’s Mother in Chrysanthemum Tea, but way too flamboyantly over-the-top in other scenes.

Ian Mowat was wonderful as the Old Man in Someone In A Tree and as the English Ambassador in Please Hello (Sondheim’s outdoing of Gilbert and Sullivan) but his turn as the Madam in Welcome To Kanagawa was garish and tiresomely trite.

Alexander McMorran has an excellent bass voice, although one not quite up to the demands of the role, but his performance left much to be desired. Singing is not enough in musical theatre, especially Sondheim.

Unfortunately, a key role is thrown away. As Majiro, the fisherman who escapes the island to go to America and then returns to be sentenced to death, reprieved, made to work with Kayama and finally stages a coup, Emanuel Alba is entirely out of his depth. One flat dimension is all that is offered for this multi-faceted and intriguing historical figure. It’s a great pity.

The choreography and staging throughout is quite beautiful, with the one exception being the odd, slightly self-indulgent Lion Dance performed by Marios Nicolaides just before the Act one curtain. Some scenes are dazzling, so intensely intimate is the feeling created by cloth and candle, and the slow, stately pace of some of the routines enhances the balletic effect. There is an ineffable artistry about the entire proceedings which leaves a lasting glow.

The Union is a venue which provides many opportunities to see musicals rarely performed. This is one of the occasions where the effort to attend the venue and deal with its shortcomings and policy of unreserved seating really pays off.

Even in the stifling humidity and heat of the afternoon, this was an excellent afternoon in the company of Sondheim’s magic.