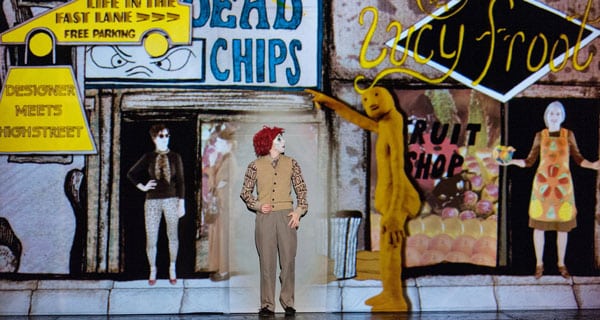 GOLEM TRANSFERS TO TRAFALGAR STUDIOS FOR LIMITED SEASON FROM APRIL 22, 2015

It is usually a cause-célèbre when Dame Judi Dench features in a play in London but her contribution to Golem, a 1927 production (1927 being the name of the Company, not the year the work was originated) now playing at the Young Vic, goes completely unheralded. When her mellifluous tones start to weave her trademark magic on you, the effect is doubly disconcerting. Here is a trusted theatrical friend giving voice to the worst, but seductive, notions of corruption, notions which strike at the very essence of humanity, individuality, at once making the insidious nature of advertising both alluring and contemptible. It’s inspired.

Of course, it might not be the real Dame Judi. It may be a very good imitation. The five members of this company seem capable of pretty much any theatrical trick. Either way, the point is made compellingly.

I can safely say that I have never seen, in a theatre anywhere in the world, a production quite like Golem. It is unique. Wonderfully so.

Golem is a savage satire about our complacency as a society, about our seemingly endless desperation to be “up to date”, about our fear of difference, our contempt for individuality, our obsession with technology. Weighty, heavy themes – but presented as part vaudeville-on-cocaine, part cartoon, part musical, part apocalyptic comedy. If you can imagine Family Guy mashed up with 1984 with a touch of Sesame Street, you will have an idea of the kaleidoscope of ideas and images on display here.

Written and directed by Suzanne Andrade, Golem is an unsettling, comical mirror on the absurdities, and accumulated cost, of modern life. Every word is delicately, carefully chosen; the characters shaped in a specific vocabulary which defines and blissfully enlivens them.

The serious messages are disguised in an absurd and quite wonderful animation framework (kudos to the gifted Paul Barrit): pictures, drawings, photographs, animation all are integral to the ever changing backdrop here, and all work marvellously well. Add Sarah Munro’s inventive and kooky costumes and some remarkable lighting (not specifically credited, but possibly also Barrit’s handiwork) and the tapestry upon which the action plays out is as vivid, strange and beguiling as ever might be imagined.

You could be forgiven for thinking this was a fairytale, so delicate, amusing, but full of truths, is Golem. If Tim Burton did a live-action adult pantomime, this might be it.

The cast are tireless and assiduous in delivering performances that are both stylistic and intensely human. Esme Appleton, Will Close, Lillian Henley, Rose Robinson and Shamira Turner are all fantastically gifted. Ben Whitehead provides the voice of the Golem; his superb delivery, robotic and charming, propels the narrative with wry insistence.

There is no way to adequately convey the sense of bring in the audience of Golem. The less you know about it before you see it, the better, the more deliciously enticing, the more completely absorbing it will be.

Golem is entertaining and disturbing in equal measure. It’s a remarkable theatrical achievement and one that should not be missed.