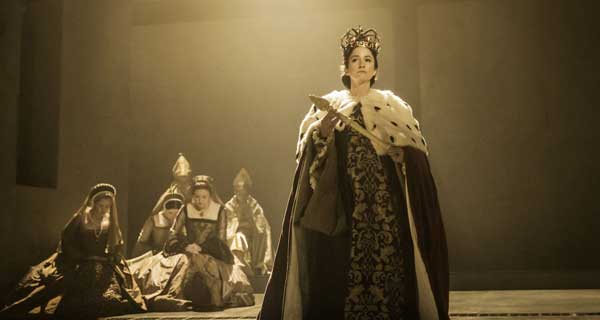 In many ways, the productions, helmed by Jeremy Herrin, are in crisper, more visceral and thrilling form than when first seen in Stratford. The shift to a proscenium arch stage has not dulled or detracted.

Ben Miles has developed acres of intricate detail in and around his central, star turn as Thomas Cromwell. He almost never leaves the stage and while on it commands it effortlessly. The sense of the simmering anger of the former Blacksmith’s Boy is ever present, perfectly aligned with the calculating political mind and the sense of duty and loyalty. The twinkle of comedy he adds provides stimulating zest.

Paul Jesson is now completely relaxed and pitch-perfect as Wolsey, equal part grandee and low-born made good. The tone of the his performance is now spot on.

Replacing Joshua James as Cromwell’s protege, Rafe Sadler, is Joshua Silver (was the Christian name Joshua a pre-requisite for casting?) and he has a key advantage over James: physically, he could be a young Miles, so the sense of Mini-Me is ever present and that is for the better. Silver has a winning, cool and observant presence and he is, in equals parts, steel and sympathy.

The rest of the cast provide the same, detailed and intriguing performances as before, although in almost every case there is an assurance, a confidence and a depth which resonates and adds to the overall effect.

Only Matthew Pidgeon (Bishop Gardiner) and Nicholas Day (Duke of Norfolk) stray unfortunately into overblown bluster and goggling-eyed ham – everyone else provides finely honed, believable performances, many of them handling multiple roles. The women in the cast are especially wonderful.

In most respects, it is better and more vibrant, more deftly detailed, than it was in Stratford Upon Avon. It’s an unrivalled spectacle of theatrical ingenuity.