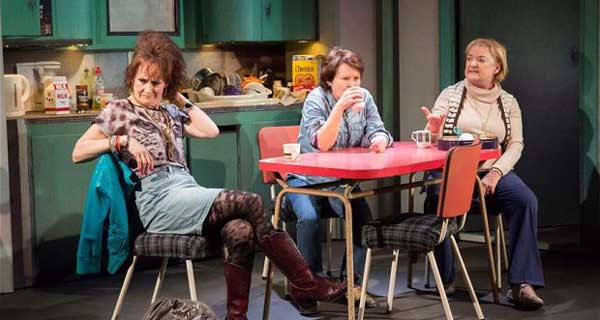 What does it take to be a good person? Is it enough to live the best life you can and keep the secrets that need to be kept to protect others? Is it necessary to put others first? Is goodness to do with family, breeding, class or choice?

These are the questions which lie at the heart of Jonathan Kent’s smart snappy and quite hilarious production of Good People a new play from Pulitzer Prize winning David Lindsay-Abaire.

As well, the play is that most rare of theatrical creatures – a play that looks specifically at the notion of class in the context of America, in this case Boston, and, in particular, South Boston or Southie. Not that you would know you were in Boston from the accents deployed by the cast here, but, really that is a minor quibble.

This is an excellently written slice of visceral, funny realism. And in Kent’s production, it is as tight, taut and terrifically funny as could be hoped.

Hildegard Bechtler’s set is fabulous and provides a gritty sense of small town grubbiness for all of the Southie scenes and then morphs into subdued tasteless bland glamour for the key scene in Act Two in the “Chestnut Hill” home of the affluent former Southie kid turned wannabe A-lister Specialist (Doctor). It uses a revolve to excellent effect, symbolising the circle of fortune which permeates the play and evoking the effect of a roulette wheel at the same time. The set absolutely sets the various scenes, but it also works with the text to illuminate the concepts and ideas which underpin the dialogue and situations.

For this is a play about gambles that pay off and those that don’t, about chances taken or not, about luck seized or overlooked, about repaying debts or ignoring them – but, most of all, it is about integrity and where the line exists between being a good person and being a bad person.

The entire proceedings are helped immeasurably by quite impeccable casting and a particular jewel, glittering, precious and diamond-tough in the centre: Imelda Staunton.

Staunton is an actress of incredible range and power. She completely owns every aspect of Margaret here and her performance is riveting and bravura from start to finish. She misses no tricks, finds fresh and intriguing ways to handle the treacherous path her character walks and she does it all without ever playing for sympathy or seeking approval. And she is wonderfully funny. Her atrocious hairdo and make-up in the first scene of Act Two, when she turns up for a “lace curtain” party is spectacularly funny as is her “How the fuck would I know?” response to the hostess’ question about whether she is enjoying the red wine. Her request for a tour of the Caterer-provided cheese board is another comically blissful moment, but a searing, blistering statement about the disparity in class as well.

For Margaret is a plain, simple woman, from plain, simple stock; a Southie woman through and through. An underdog, a battler, whatever expression you use to describe a person who has never had any luck in their life but who has worked hard and scrounged to make as a good a life as possible for herself and her disabled adult daughter without turning to any addiction or anti-social behaviour to get by. And Margaret always tries to see the best in others and to treat people fairly, although she will, when trapped, fight like a caged, starved animal desperate to protect her young and, in those times, do and say anything to get her way (and not usually succeeding).

Staunton shows all of this clearly. Her almost incoherent babbling when she feels awkward, her silences, her pinched, tight lips, her awkward stance, her attempts at “relaxed” body language in “fine” company, her lapsing into extreme coarseness (yes, it is worth the admission price to hear La Staunton say the C word), her explosions of long pent-up rage at the unfairness that has forever haunted her – all of it, brilliantly and incisively done. And, best of all, it is not til the very end of the play that all of the chickens come home to roost and, in retrospect, you can see why Staunton bit her lip there, or cried there, or was silent there, or was generous there: all the pieces fall into place and you are left marvelling at her great skills as an actress.

There is a quadruple bluff that is central to the plot and which forms the backbone of the twists that entwine Margaret through the play. Staunton pulls this off magnificently, landing the final blow softly and almost as an aside, thereby making the whole effect all the more gripping and exciting. It is exceptional work from a great actress.

But the rest of the cast hold their own. Angel Coulby, so simpering and sweet as Guinevere in the BBC’s Merlin, is especially good as the Specialist’s unhappy but trophy wife. She is both venomous and silky in equal measure – and her confrontation with Staunton’s Margaret the highlight of the evening. She has a deft style for comedy too.

Lloyd Owen seems wrong as the Specialist at first, but as the play unravels and his back-story comes to prominence so it is clearer to see who and what he is, it turns out he has been perfect all along. His character is playing a character, so the sense of falseness first encountered is not a sign of bad acting, rather, it is a sign of a deeply thought through and cleverly played performance. The simmering sense of resentment for Southie, his past and the lies he has told to get where he is, all of that lies just below the façade of tanned, well-to-do medical professional.

As her long standing friends, Dottie and Jean, June Watson and Lorraine Ashbourne are perfectly ghastly, frequently hilarious and utterly real. Watson, in particular, presents a character ravaged with time and now unwilling to indulge in social graces. Ashbourne plumbs new depths for “trailer trash” but she has the most important moment in the play with Staunton, and she downplays it to perfection, nicely contrasting the more languidly exuberant aspects of her sharp-tongued character.

Completing the cast is Matthew Barker who, as Stevie, the hapless Dollar Store manager must fire Margaret from her low paid shop assistant job or be himself fired and who then awkwardly plays bingo at the bingo hall with her, Dottie and Jean over the subsequent days and weeks. He is exactly right in every way. He is very funny but also very normal and his exchanges with Margaret turn out, in the end, to be the most honest she has. Stevie provides the contrast to Mike, the Specialist: he stays in Southie, does his job, treats people well and faces up to his responsibilities.

Unsurprisingly, it is transferring to the West End, having sold out at Hampstead Theatre.