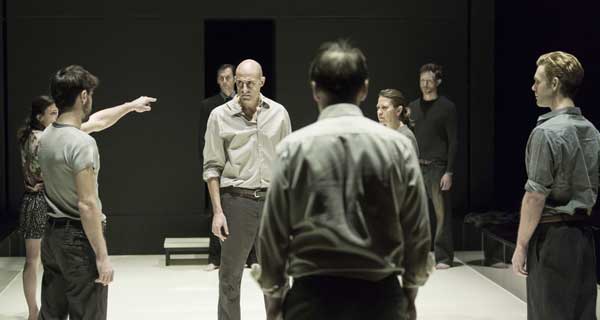 No doubt, in fifty years time, those interested in such things will look back upon Ivo van Hove’s spare, shattering and absolutely stunning production of Arthur Miller’s A View From The Bridge, now playing at the Young Vic, with the kind of reverence and awe currently reserved for Olivier’s Othello or Peter Brook’s game-changing A Midsummers Night’s Dream.

Revelatory and almost unbearably suspenseful, this production is a masterpiece in every sense.

Miller’s play can feel long, because it is an old-fashioned symphony of pain and obsession. At an uninterrupted running time of two hours, this version is considerably shorter than usual but it loses nothing and gains a considerable amount through the judicious cutting and revising. Exposition is deftly abandoned in favour of getting to the succinct putrid heart of the tragedy. I doubt that this play has ever been so successfully examined and portrayed as it here.

The extraordinary set from Jan Versweyveld assists, in a real and visceral way, in setting up the emotional resonances of the play.

The theatre is configured as a three sided thrust, with a huge coffin-like structure in the centre of the playing area. Fauré’s Requiem signals the commencement of the action, and as it commences its funereal strains, the sides and lid of the structure ascend to reveal a long playing space that could be an oddly shaped boxing ring. Two men are showering, cleansing themselves after a long arduous day of very hard work. The sense of weary, resigned, powerful masculine activity is palpable, as is the notion of cleansing.

This opening image is incredibly evocative and without a word tells you exactly what kind of a man is Eddie, the central character. Alfieri, the narrator lawyer, begins his reflective monologue while the showering and changing takes place. By the time the speech is done and the men are dressed, the powerful, brutal, hard persona of Eddie is crystal clear.

And the audience is plunged directly into the festering pool of Eddie’s inner circle. His lust-less marriage with a puzzled Beatrice. His obsession with his adolescent niece Katherine. His offer of help to illegal immigrant brothers, Marco and Rodolpho, both of whom have fled Italy for the hope of work and the prospect of saving money.

There is a key moment, very early on, when Katherine runs into the home she shares with Eddie and Beatrice and she flings herself onto Eddie, front-mounting him after he scoops her up in his arms – a movement practised and fluid, obviously the result of daily repetition. A movement that would be endearing if Catherine was 10 but is skin-crawling because she is approaching womanhood. The haunted, harrowing look in Beatrice’s eyes counter-points the familiar ease exhibited by her husband and her niece. That one moment says more about this relationship than pages of dialogue ever could.

And so van Hove progresses through the evening, filleting the script, producing iconic enduring images that sear the situation onto the audience like a cattle brand would and then economically using dialogue to flesh out the intricacies.

There are no props, no scenery. Just the bare stage, the actors, the power of the piece and, for one short scene, a single chair. The cast are barefoot throughout, a decision which silently but immediately confirms their vulnerability while evoking notions of home hosting and church and permits the sequence where Catherine wears high heels to stand out with alacrity.

Nothing happens here by chance. Every decision has meaning, resonance, purpose.

When Rodolpho falls for Catherine, you see her move from teenager to woman in front of your eyes. When Beatrice finally names the source of her marital discomfort it is with a venomous singularity that pierces the heart. When Marco, almost impossibly, holds up a chair by its right back leg for what seems like an eternity, the display of aggressive supreme power is palpable. When Eddie pins Rodolpho’s arms to his sides in a bear lock and then brutally kisses him, it is terrifying and vile: a moment of electric, raw power.

Most impressive is a sequence late in the play, when tensions are high in the household, and a short scene about mundane matters plays out, a cover to the simmering, near boiling, interpersonal tensions amok in the house. Each line or part of a line is spoken haltingly and then followed by a long long silence – the cumulative effect is shockingly disturbing, almost unbearably tense. You feel like you are tied to dynamite and the flickering flame of detonation is racing towards you. It’s extraordinary stuff.

It really is shatteringly good in every way. And the final blood-soaked vignette is both poetic and horrific and demonstrates a radically different sort of cleansing to the one which saw proceedings kick off. No fight scene could be as provocative, as grimly detailed, as shockingly all encompassing, as the final tables here.

When the “coffin” lid closes, the pain is locked away. The audience is shell-shocked and silent – bathed in the sonic burst of fatal obsession and consequences that, like a fine Mahler symphony, has been played out in divine, every-stone-upturned clarity.

The casting here is faultless.

Mark Strong is astonishing as Eddie, all pent-up lust, repressed anger and vital but deranged masculine ego. It is a rich and profoundly unsettling performance full of intense, radiant and incisive detail. They should mark the Olivier Award as his now because the London stage is unlikely to see a towering performance of this complexity, this physicality, this exceptional vocal standard, this sheer, raw power anytime soon. Utterly breath-taking in every way.

Nicola Walker is superb as the side-stepped Beatrice. She is tougher and more direct than Beatrice usually is but this works entirely in the character’s favour. The distance between her smile of hope and her grimace of fear and despair is alarmingly short but dazzling to watch – as the play proceeds, the distance becomes shorter until, finally, the expressions are as one. Walker is marvellous at reflecting this pain and discomfort in her entire body. Thrilling.

Luke Norris is sensational as the pretty boy Rodolpho who unknowingly challenges Eddie’s conceptions of manhood and fatally falls in love with the object of Eddie’s lustful notions. Norris is a fiercely heterosexual Rodolpho, but casually demonstrates the softer side of this romantic Italian. He is in splendid physical condition and brings a youthful engagement to every part of the role. Riveting.

I have never seen a more complex, more brooding, more fatherly, more humble, more absolutely perfect Marco than the one provided by the gifted Emun Elliot here. He is thunderously good, the perfect brother to Rodolpho, the loving and supportive father for his far-away family, and a man’s man who can beat Eddie in a fight if he has too. His visceral sense of outraged murderous shock at Eddie’s actions provides the dynamite for this particular explosive outcome. Dangerously good.

Phoebe Fox is perfect as Catherine and it is completely possible to believe that Fox’s Catherine did not know what Eddie was really thinking until he (and Beatrice) makes it crystal clear. Her love for Rodolpho is genuine and sweet, her affection for Beatrice uncompromised and her love for, but total inability to comprehend Eddie’s obsessive lust, delicately, but precisely, played. Her silences are instructive also, as are the scenes where she sits on the sidelines, always a presence in the loves of the other characters. Superb.

As the harassed and Pontius Pilate like lawyer, Alfieri, Michael Gould is just wonderful. He conveys the weary reluctance to get involved and, with a gentle but assiduous clarity, provides the “conscience” of the piece, the other point of view. His contributions do not stop the progress of the play (as sometimes they can); rather, they enhance and grace the steps along the way. Terrific in every way.

This is an absolute must-see for anyone who loves the theatre. It’s sold out at the Young Vic but hopefully will transfer. There are day seats released every day. Do anything to get one and see this exceptional piece of theatre.