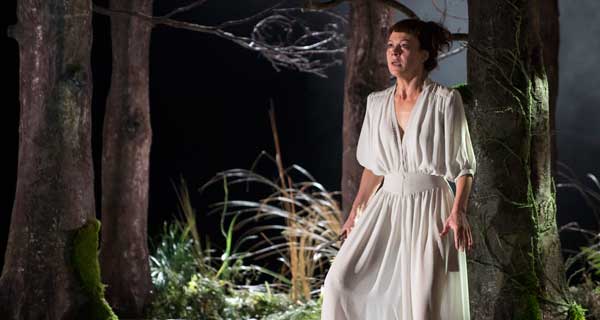 In 1697 William Congreve wrote The Mourning Bride, his one tragedy, and penned words which would find their way into immortality:

Heaven has no rage like love to hatred turned, Nor hell a fury like a woman scorned.

One can’t be sure, but it seems at least possible that Congreve had Medea, perhaps the greatest female character from Greek literature, in mind when he wrote those lines for his character, Zara. Because, in a succinct and quite startling way, those lines encapsulate Euripides’ searing drama: a powerful, gripping and unfathomably modern consideration of the psychological fury that leads to all-consuming rage-grief and which ends in spectacular murder.

The tale of Medea, who falls in love with Jason (of the Argonauts fame), and for whom she abandons her family and slaughters her little brother, and travels with Jason to Corinth where she gives him two sons and is then shattered when he deserts her to marry the daughter of the king of Corinth, is well known. All of that happens before the play begins.

What the play centres on is how Medea reacts to what Jason does to her in betraying her for another woman: she realises the best revenge will be to destroy Jason’s bloodline, rather than murder him. To take away from him the honour of his House, something the Greeks valued very highly. So she poisons Jason’s bride to be and her father, the King, and before vengeance can be exacted upon her and her children by the dead King’s retinue, she slaughters her own sons and rubs Jason’s face in the finality of her deeds.

Often, all people remember about Medea is the murder of the children and she is vaguely thought of as one of the worst villains of all time, making Lady Macbeth seem like Maria Von Trapp. Even Sondheim hooks into this zeitgeist view of the character when Pseudolus sings to the audience, in Comedy Tonight, the opening number of A Funny Thing Happened On The Way To The Forum, that the actress playing Domina “plays Medea later this week”.

But there is more to Medea than a black heart and a maniacal gleam in the eye.

As Edith Hall, in the programme notes for Carrie Cracknell’s production of Ben Power’s new adaptation of Euripides’ masterpiece which is now playing at the Olivier Theatre at the National, says:

It’s not just a play about marital breakdown and parenthood, but an intense psychological examination of how anyone, regardless of their sex, can be sufficiently inflamed by insult, loss and vengefulness to slaughter the people they love the most.

Helen McCrory is in simply sensational form as Medea. Full of fury, intelligent analytical insight, and dripping with desperate, howling, soul-tearing rage, she lights up the Olivier stage in a world class turn. She is utterly glorious in every way: The from-the-core shrieks of grief that render the air as the play commences; the look on her face as she digs into the ground to find the poison she needs and invokes the help of the witch Hecate; her fake pleading with Kreon; her waltz for information with Aegeus; her inner conflict about the fate of her sons and then, finally, her ennervated march to carve up her sons with a knife we have watched her hone to razor sharp precision.

The final, remarkable image of her hauling the blood-soaked sleeping bags in which she has interred the carved up remains of her sons is staggering – encapsulating precisely how she has been brought to her knees by the man she adored and the vengeance she has wreaked upon him.

McCrory achieves that almost impossible feat – she makes you understand, care for and empathise with Medea’s situation. You feel her pain and fear and disgust and rage as surely as you feel your own heart beat faster as the horror unfolds.

Watching McCrory, it is impossible not to imagine Laurence Olivier looking down benignly from above, happy that the National Theatre he catapulted into life was reaching the acting heights he and his original company benchmarked 50 years ago. These days, those heights are not often reached – but McCrory ascends them here memorably.

And she does not get much help. Danny Sapani is a limp and tiresome Jason; instead of the god-like warrior who radiates appeal and intoxicating presence, there is an intense dullness, a sloth-like false grandeur and a churlish sense of disbelief. He is extraordinarily ordinary. McCrory is a volcano of intense, profund energy and next to her, Sapani is no more than a flickering candle.

It’s incomprehensible, especially as Dominic Rowan is in the cast as Aegeus, a role he plays with grace and ease. Aegeus is an important character – his scene with Medea is key as it is from him that she gleans the path of revenge that will cripple Jason most profoundly. But Rowan would have been better used as Jason – the frisson between he and McCrory, patent in the moments they did share, would have been heightened and tangible had he been Jason. A spectacularly missed opportunity.

Indeed, none of the supporting cast, apart from Rowan, is very good and most of them are borderline awful; poor diction, incomprehensible understanding of the text and little sense of the immediacy of the moment.

But the Chorus, the women of Corinth, are quite impressive. They are used by Cracknell to make a political point as well as represent, at various turns, the inner workings of Meda’s mind. They represent the archetypal female figures in a patriarchal society – the maid in waiting, the bridesmaid, the wife, the mother. They sing and move in unison and harmony and the overall effect they achieve is disquieting and surprisingly effective.

The production benefits enormously from the music supplied by Will Gregory and Alison Goldfrapp – it’s chilling, evocative, splendidly judged. A real asset.

Tom Scutt’s set is, frankly, odd. It looks great – money has clearly been spent. But it seems like a Holiday Inn (almost), a run down one, lacking in refurbishment attention – and there is a wild section of forest which provides a ferocious and scary Mother Nature backdrop. So there is a combined sense of decay and raw natural power which works well for the themes of the play – but it still looks odd.

Cracknell ensures proceedings move on apace and the play is never bogged down or slow. It burns with a long fuse and explodes when it needs to explode. Power’s adaptation is not especially thrilling or poetic or extraordinary, but it works well enough.

And it lets McCrory shine.

Rufus Norris, the incoming Artistic Director of the National Theatre, has been vocal about the future of the National being about “new writing”. No doubt the National should encourage new writing, but not at the expense of evocative productions of the classics, the great old texts; productions where great performers have the chance to shine.

The National Theatre needs to be about great performances in great plays, new and old. Lord Hytner has, like his predecessors, understood that even if he has not always ensured it in practice. Norris would make a serious mistake to create a company vibe where a performance such as McCrory’s in Medea would be denied the world.