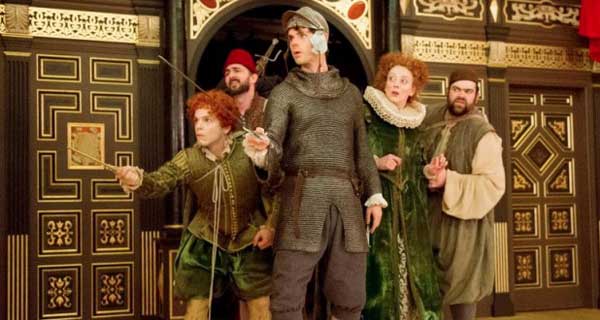 Rodgers and Hammerstein will tell you there is nothing like a Dame, and while they are right, the other thing there is nothing like is going to the theatre to see a play about which you know nothing and being absolutely bowled over by it. Even more exciting is when that happens and the play in question was written in 1607, “begot and borne” in eight long ago days.

But so it was tonight at the lovely Sam Wanamaker Theatre where Adele Thomas’ quite glorious, beautifully judged and perfectly performed production of Francis Beaumont’s The Knight Of The Burning Pestle is playing and bringing unrelenting joy to its audiences.

The script is fresh, funny and alarmingly post-modern for something written so long ago.

The central conceit concerns a band of players who are about to play one of their rehearsed works for a London audience. They start, but there are argumentative and loud hecklers in the crowd, people who are not afraid to cause a ruckus and demand entertainment they want over what they have paid to see performed.

The hecklers demand a play for the working class and insist that their indentured servant (who works for a Grocer and who is afeared, quite rightly, of the Grocer’s wife), a shy, timid and slightly crippled lad called Rafe, joins the company and does whatever they want on stage while the scheduled play adjusts and goes on.

It is as bizarre as it is funny. A true farce, but one fuelled with real heart.

There is not a single person here who is not entirely sure of what they have to do, entirely capable of doing it and entirely and completely immersed in ensuring that it all works and that everyone works together.

The company is rich with talent. It takes real skill to play bad acting convincingly – but this company excel at that. It is laugh out loud funny frequently. There are touches of diva and star in many performances, but nothing is ill-judged or out of kilter; everything works wonderfully well in a synchronicity which is both startling and immensely enjoyable.

As the usurping citizens who hijack the play, Phil Daniels and Pauline McLynn are simply wonderful. The sequence where she rustles lolly papers and shares them around her fellow audience members, utterly upstaging the people on stage, is breathlessly funny. And Daniels has an unerring ability to skewer a joke and then wring more humour from its writhing body. Together, they are a comic sensation.

As Rafe, the lowly lad thrust into the limelight, Matthew Needham gives the performance of the evening. Gentle, simple, out of his depth, but always striving to succeed – the detail Needham gives this character is intricate and rewarding. He is funny in every way and then, quite surprisingly, he delivers a speech late in the play which is genuinely emotional and which makes one proud to be Londoner. His is a masterful performance.

Alex Waldmann is in top form as the leading man of the players who hates the intrusion forced upon them, but who is open to every venal and ostentatious display of “star” quality. It is a fine comic turn and his ghostly scenes are particularly enjoyable. The woman behind me was so convinced that he had died that when he came to life in the coffin she genuinely screamed. Remarkable.

Especially enjoyable is his physical comedy. He and Needham have a fight that literally occurs all around the theatre, smashing into posts, windows, glass partitions, walls, floors and audience members. No stone is left unturned in the gambit for laughs.

Matching Waldmann in every way, Sarah MacRae was marvellous as Luce, the beauty of the company. She is delicious in every way, particularly in her dealings with the man her father wants her to marry (a pitch-perfect prig, with a marvellous line in rhyming couplets, from Dickon Tyrell, who has the best entrance of the evening and whose all Pink outfit in the first Three Acts is the encapsulation of hilarity) but also in her scenes of genuine affection with Waldmann. Quite quite marvellous is her speech over what she thinks is Waldmann’s dead body.

There is excellent buffoon work from Samuel Hargreaves (a kind of jester, who sings, dances and acts with care and aplomb), Dennis Herdman and Dean Nolan (a kind of Laurel and Hardy double act who provide perfect comic foils for Needham’s Rafe – in particular, a flying buffoon and a golden bearded Princess). Magic.

Hannah McPake is delightful as Mistress Merrythought and in a scene-stealing performance (really everything he did was sublime and hilarious, even the way he wore his ludicrously ginger wig) Giles Cooper is a sensational Michael, the drippy but earnest and likeable younger brother to Waldmann’s self-centred Jasper.

Paul Rider makes a lot out of little with Merrythought, and his costume of choice (filthy underwear) works well, juxtaposed against his perennially sunny nature. He sings a lot, and not well often, but none of it is off-putting. Somehow he puts the charm into off-key.

Brendan O’Hea is quite marvellous as the vicious knife-sharpening villainous hotelier (the dampest villain on the West End) and then turns in a tour de force as the ludicrous Giant Barber that Rafe must despatch.

The whole company is a sheer delight. No one is ashamed or scared or unsure of what the director wants, and what the director wants is a simple, unfussy but very clever and hilarious fulfilment of Beaumont’s vision. In this, Thomas is absolutely and correctly on firm ground – and the result is a triumph. Three hours of joy.

There is no doubt that there could be cuts made to what is presented here, but, truly, there is no need. This is not a long night in the theatre. It bubbles along with an enthusiasm and a zest which is life-affirming and quite magical.

It is startling to realise this play was written seven years after Hamlet. It feels as fresh as a daisy.

If you value the warmth that humour and truth provide, rush to see this. It’s a winner.