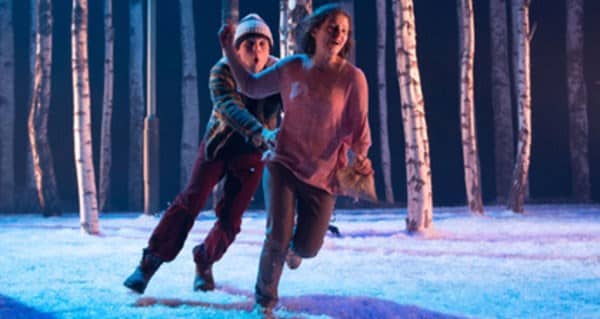 Before, last night, I could count on the fingers of one hand the number of times I have been genuinely shocked/frightened/terrified whilst sitting in a West End theatre (abysmal acting/singing or productions aside); the times when my heart skipped a beat, or stopped cold, the hairs on my arms tingled and stood erect and a sound of pure untrammelled surprise burst forth. Moments of real, unexpected fear. Rare ones.

But after seeing John Tiffany’s graceful, brutal and magical production of Jack Thorne’s adaptation of Let The Right One In (a novel from Swedish author John Ajvide Lindqvist) which is now playing at the newly re-opened Apollo Theatre, after successful seasons at the Royal Court and the National Theatre of Scotland, I now need both hands and at least one foot.

Tiffany is one of the most gifted, versatile and downright astonishing directors on the world stage. He is responsible for Once, New York’s recent Glass Menagerie, the extraordinary Blackwatch and now this spare, perfectly formed tale of love and evil.

People will tell you it is a vampire love story, but that, it seems to me, is to fundamentally misunderstand this great achievement.

At its core, this is a play about the many forms that love can and does take and what it means to truly love another. Concurrently, it exposes the real evils in modern society (peer pressure, bullying, self-interest, deception) and contrasts them against those perceived to the right ones to despise: the loners, the ambiguous, the different.

It is almost fairy-tale like in is approach and setting; gentle but with a deeply sharp and scarred underside. It is as disquieting as theatre can be and yet profoundly affecting as love and acceptance triumph in the end, although at a savage cost.

Christine Jones provides a set which is all things: home, sweet shop, school gymnasium, school playground, another home, a swimming pool – all easily evoked with simple accoutrements. But the main stage, the every present vista, is that of Woods. Woods which can be dappled with sunlight or glinting in moonlight – but always woods with shadows and spaces for hiding. Woods which can see murder occur or rescue be achieved.

And there is snow. Everywhere. The white blanket of snow makes everything seem joyful, happy; and this effect is heightened by the use of small feathers to imitate the snow. The soft down floats and does not melt, providing a firm but malleable surface. It radiates comfort and calm, so the hideous deeds perpetrated on it seem all the more repugnant.

Chahine Yavoren lights the set magically. Each shaft of light, each different colour or shade adds texture and detail, emphasising the growing tension, the impending horror. It’s marvellously evocative. And when you add Gareth Fry’s sound to the mix you have an unfeasibly heady combination of skill and minute detail.

The world in which these characters live is presented clearly, cleanly and spellbindingly familiar. Yet, at the same time, it is disquietingly alien.
Oskar is a young lad, nerdy, shy and mostly lonely. He lives with his alcoholic mother and is tormented by his school companions who taunt him as “Piggy”. One day he meets Eli, a strange “girl”, barefoot and apparently roaming the woods. They instantly like each other and over time like is not a strong enough word for what they have. But Oskar is no fool, and he realises that Eli is undead, that she feeds on blood and may not even be a girl. But he does not care; he is drawn to her and wants her to be his girlfriend.

But Eli has a Watcher, Hakan, an old man who protects her and kills others to provide her with the blood she craves. Hakan makes an attempt on Oskar’s life but is discovered and tries to kill himself. He fails and the police start looking for the place from whence he came. Eli is in danger and she needs a new Watcher.
What happens thereafter needs to be seen. Because like all good fairy tales, this one has a series of important messages. Bullying is bad; vengeance is worse. If you love another, you will do anything to protect and care for them. Anything. Love comes in all shapes and sizes and can adapt to the particular circumstances – Oskar’s Father and his new partner, the curious man in the sweet shop, Hakan and Eli, the vicious brothers Jonny and Jimmy – and, centrally, Oskar and Eli, whether girl or boy or something else.

There are many potent images and concepts at play here: the idea that Eli might have reshaped herself as a “girl” to suit Hakan; the idea that Eli is frozen as not-child-not-adult; the idea that Hakan’s love was mortal and so ended after many years and that Oskar’s would be the same: yet, both willingly love, knowing the equation is unequal.

Rebecca Benson is wonderful as Eli. Fierce, inhuman, soft, violent, crazed, reasoning, beautiful – it’s a multi-faceted performance of real depth and insight. And the physicality she brings to the role is amazing: the sequences where either the Sun is attacking her or she had trod where not invited allow Benson to show her total immersion into the “creature” that is Eli. She gnarls her hands, disfigures her face and back – it is raw and powerful. But it is all suffused with gentle wonder and quiet affection. She accepts her fate but does not revel in it. She is beyond scary and surprising: she is magnificent.

Martin Quinn is terrific as Oskar, in every aspect. There is an honest nerdy charm to everything he does, and he too embraces all the physical aspects of the role. The scene where he is nearly drowned in the swimming pool is startlingly done; the longer he sits underwater not breathing, the higher your pulse rate. He is deft in the comic moments and finds all of the reality in Oskar’s world. It’s a winning performance.

The rest of the cast do great work and play many characters. Gary Mackay is especially good as the odious Sweetshop owner and Oskar’s absent, now out-of-the-closet father. He gets directly to the heart of these very different characters as well as the others he plays. Susan Vidler effortlessly essays Oskar’s lost broken mother and Cristian Ortega is lovely as the deceitful Micke.

It is difficult to see how this production could be better. Scary, imaginative and practically perfect in every way. A modern fable not to be missed.