The team at BritishTheatre.com have got together (virtually) to come up with a few of the theatre books – both old and new – that we’ve been reading and recommending. 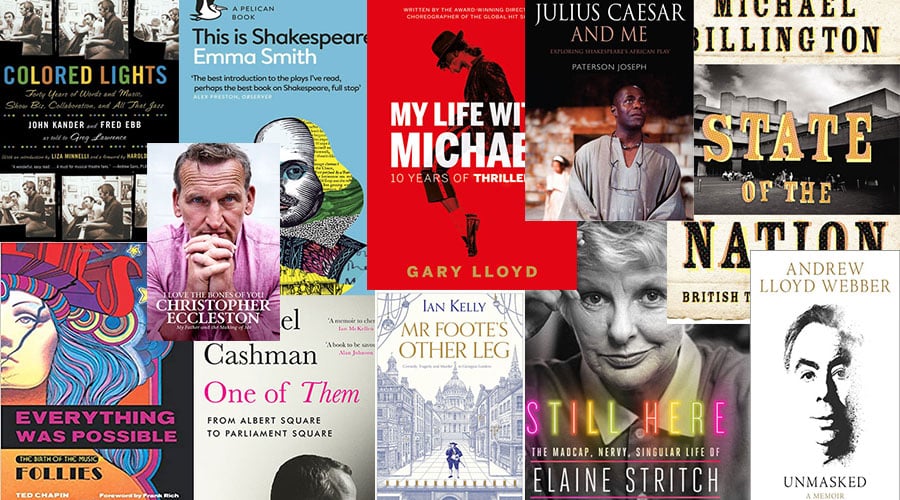 I Love the Bones of You: My Father and the Making of Me by Christopher Eccleston
In this new autobiography, actor Christopher Eccleston provides a moving and personal account of his relationship with his father Ronnie and how it shaped his whole career. Highlighting the barriers faced by people from working-class backgrounds, he takes readers through the highs and lows of his work on stage and screen, including his time as Doctor Who, talking about his breakdown, anorexia and self-doubt as well as sharing his experience of Ronnie’s descent into dementia. Click here for Paul T Davies’s review.

My Life with Michael: 10 Years of Thriller Live! By Gary Lloyd Thriller Live! has now ended its 11-year run in London’s West End but its director Gary Lloyd has charted his journey working with Michael Jackson’s legacy in this new autobiography, published last year. It explores Lloyd’s early career as a dancer in the 1980s and his move into choreography and direction before taking us into the workings of the global hit show. It reveals how the show was cast and how those performers developed as the show exploded around the world alongside other behind-the-scenes stories. 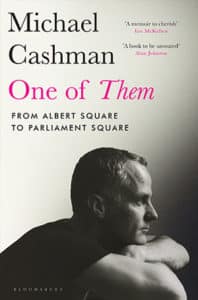 One of Them: From Albert Square to Parliament Square by Michael Cashman
Michael Cashman’s new autobiography reveals how he went from being a stage and screen actor – including delivering a landmark gay kiss in EastEnders – to becoming a gay rights campaigner, MEP and life peer. With plenty of showbiz gossip, it traces his first career back to his time as a child actor, debuting at 12 in Oliver! in the West End and later performing with the National Youth Theatre. As co-founder of Stonewall with Ian McKellen, he talks about his work in civil rights and politics as well as how he came to find the love of his life. Click here for Paul T Davies’s review. has written about the twists and turns of his long career. Writing in his own quintessential voice, Andrew Lloyd Webber goes back to his childhood, revealing his early influences, and how he later came to write shows from Joseph and the Amazing Technicolor Dreamcoat through to The Phantom of the Opera. He takes us behind the scenes of his productions, revealing details about each show, including the people he worked with including collaborators Tim Rice, Robert Stigwood, Harold Prince, Cameron Mackintosh and Trevor Nunn and performers such as Elaine Paige, Sarah Brightman, Judi Dench, Patti LuPone, Barbra Streisand, Michael Crawford and Betty Buckley. Published in 2018, it came out in paperback last year. This Is Shakespeare: How to Read the World’s Greatest Playwright by Emma Smith
Emma Smith’s acclaimed book on Shakespeare, due out in paperback next week, challenges many of the things we think we know about Britain’s most famous playwright. She reveals the ambiguities of Shakespeare’s plays and their changing topicality, exploring how their themes continue to resonate in the 21st century. It is full of intriguing insights and ideas and, although Smith is professor of Shakespeare Studies at Hertford College, she writes in a fresh, accessible way that will appeal to anyone interested in Shakespearean theatre. 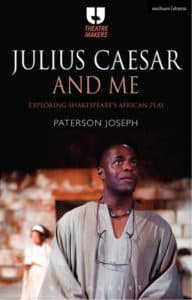 The behind-the-scenes realities of putting on a show are revealed in Paterson Joseph’s frank book about the Royal Shakespeare Company’s acclaimed production of Shakespeare’s Julius Caesar in 2012 in which he played. He takes us through the production’s concept under director Greg Doran, locating it in Africa with a majority black cast, through to rehearsals, character and line interpretations, and touring. He also talks about his own career as well as issues such as the casting of ethnic minority actors in the theatre, especially in Shakespeare. Click here for Mark Ludmon’s review. Mr Foote’s Other Leg: Comedy, Tragedy and Murder in Georgian London by Ian Kelly
As well as being a play starring Simon Russell Beale at London’s Hampstead Theatre five years ago, Mr Foote’s Other Leg started as a biography of colourful 18th-century actor, playwright and impresario Samuel Foote. The book draws a vivid portrait of the theatre world in Georgian London, following Foote through his various theatre ventures, his notorious trial for sodomy, his friendships and fallings-out with the likes of Samuel Johnson and David Garrick, and the loss of his leg which he turned into a money-making trademark. Written by actor and playwright Ian Kelly, it won Theatre Book of the Year from the Society of Theatre Research when published in 2013. For practitioners, academics and theatre enthusiasts, Reframing the Musical brings together some of the latest thinking about musical theatre. Published last year, it is a collection of articles by specialists in cultural, American and theatre studies covering topics such as black lives and LGBTQ+ spaces. Ranging from South Pacific and The Lion King to Hamilton and Fun Home, it provides fresh perspectives on musical theatre history, calling for a radical and inclusive new approach. 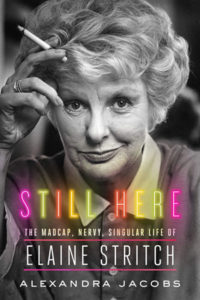 Still Here: The Madcap, Nervy, Singular Life of Elaine Stritch by Alexandra Jacobs
Published last year, this biography of legendary stage star Elaine Stritch has been described by writer Sheila Walker as a “delicious, page-turning, and meticulous romp through the distinctive life of a feminist icon”. It is the first full biography, from her roots in Detroit during the Great Depression through to her career on Broadway, exploring her collaborations with the likes of Noël Coward, Tennessee Williams and Stephen Sondheim as well as her courageous yet flawed attempts to control a serious drinking problem. Based on years of research and interviews, it captures the late actor’s sardonic wit and brassy charm while acknowledging her many dark complexities.

Everything Was Possible: The Birth of the Musical Follies by Ted Chapin Published 15 years ago, Everything Was Possible reveals the behind-the-scenes drama of putting on a show – in this case, Stephen Sondheim’s Follies. It is the journal of Ted Chapin who, in 1971, was production assistant for the musical’s Broadway premiere. It takes readers on a roller-coaster ride from the uncertainties of casting and rehearsals to the pressures of a Boston dry run through to opening night. 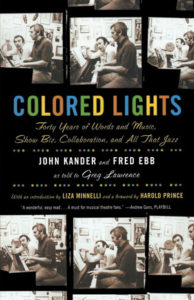 Colored Lights: Forty Years of Words and Music, Show Biz, Collaboration, and All That Jazz by John Kander and Fred Ebb
Composer John Kander and lyricist Fred Ebb – one of the greatest-ever pairings in musical theatre – talk about their careers and 40 years of American musicals in this autobiography, in the form of a dialogue. It looks at their careers from 1962 when they first worked together through to shows such as Cabaret, Chicago and Kiss of the Spider Woman (but sadly not more recent shows such as Curtains and The Scottsboro Boys). They reveal how their shows came to be staged and their work with artists such as Frank Sinatra, Barbra Streisand and Bob Fosse.

State of the Nation: British Theatre since 1945 by Michael Billington 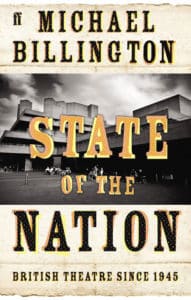 A fascinating and informative trip through 60 years of post-war British plays and playwrights by The Guardian’s former chief critic, Michael Billington, putting it within the contexts of social change and the political and cultural landscapes. Starting with Noël Coward and Terence Rattigan, it traces the emergence of a radical new theatre from the likes of John Osborne and Harold Pinter through to Caryl Churchill, Sarah Kane, Alan Bennett and David Hare. It was updated for the paperback publication in 2009.

Have you been reading any other theatre books during the lockdown, let us know your favourites.