Paul T Davies reviews Michael Cashman’s memoir One Of Them, From Albert Square to Parliament Square published by Bloomsbury.

One of Them, From Albert  Square to Parliament Square.
Michael Cashman.
Bloomsbury Publishing
4 Stars
Buy A Copy 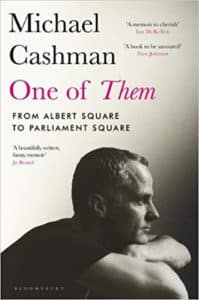 For a generation who watched EastEnders in the 1980s, Michael Cashman will always be associated with Colin, the soap’s first openly gay character, and centre of a media furore when he kissed his boyfriend, (Barry), at the height of the AIDS crisis. It was a very chaste kiss, and I remember vividly the baying headlines at the time- EastBenders screamed The Sun- and there were calls for the soap to be taken off the air. Admirably, both the soap and Colin stuck to their principles and educated and raised awareness about homophobia and AIDS in the face of great ignorance. How Cashman weathered that storm is remarkable enough, but it’s only the centre of his remarkable story, and his honest, straightforward writing, welcomes us into his life and achievements, and, above all, is a celebration of love.

The first third of the book is his tough upbringing in the East End of London surrounding by a community of wonderful characters brought vividly to life, inheriting strength and stubbornness from his parents. Drama began to change his young life, and he was cast, after being spotted in a school play, in the West End production of Lionel Bart’s Oliver! Other successes followed, but so did sexual assaults from predatory men, we should be thankful for the chaperone laws we have now. Cashman deals with this the best way he can, frank, honest and quietly exposes the structures that allowed this to take place. However, it never defines him, and he begins to make his way in the profession. Then along came the role that changed his life, chiming with the Thatcher governments, and his heightened involvement in politics, marching against the hated Section 28, working for the Labour Party, and his move into politics, co-founding Stonewall, becoming an  MEP, being awarded a CBE and raised to a peerage. His fight for equality and LGBTQ rights led to changes in laws that we enjoy now, chief being civil partnership and marriage, and an equal age of consent.

However, the book is mainly a love story and a tribute to his partner, Paul Cottingham. I too am one half of a couple that have lived from being illegal, and legislated against, to equality and full rights. Paul brings a huge level of show business to Cashman’s life, and their difficulties and success are told with honesty and joy, and much of their lives will chime with LGBTQ people of my generation. It’s heartbreaking that Paul is no longer with us, but the final chapters are written with utmost dignity and compassion.  This is a memoir that works on so many levels, charting the cultural phenomena of a major television programme, full of show biz anecdotes, brimming with love and humanity, and passionately demonstrating that the personal IS political. Highly recommended.