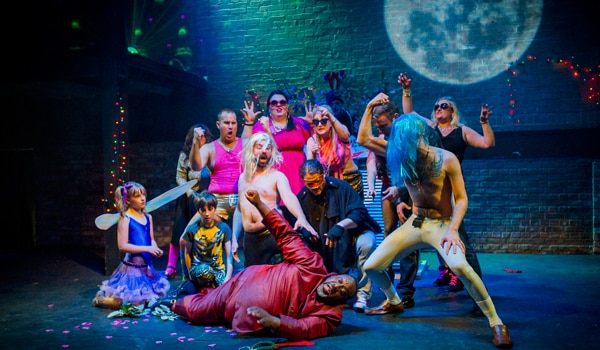 When Verdi was asked late in life by a journalist to define his theory of the theatre he simply replied: ‘A full one’. I would like to think he would have been very happy with both the performance and the sold-out house in Fulham Opera’s performances of his last opera Falstaff (1893). Verdi was not a theoretician but a practical man of the theatre, and this production shared exactly that same spirit – treating an old favourite with full respect for its musical values but open to new production concepts to bring in new audiences.

This is particularly necessary in comedies with a specific historical setting. After Monty Python and Blackadder it is not really possible to present this type of opera in full cross-gartered fustian without an ironic angle; so much better in many ways, therefore, to take it out of time and re-present it in another period altogether, or in contemporary dress – as here – where in effect it becomes The Merry Chavs of Windsor. The result is one of the best vindications of the Grimeborn ethos in the current season and a wonderful refutation of the Coward quote at the head of this review.

Studio 1 at the Arcola can be an awkward space: the main performance space is quite small, especially if you have to make room for instrumentalists too; and if a lot of the action takes place in the raised loft space then at least a third of the audience will have a restricted view of the proceedings. The first point to make about this excellent production is that it makes very satisfactory use of the theatre while minimising its limitations.

There is a fluidity to the movement of characters here, as individuals or in groups, that speaks volumes about the experience and flexibility of director Daisy Evans. The superb Bardolph (Oliver Brignall) and Pistol (Antoine Salmon) scamper over gangways amidst the audience and generate unremitting energy while still delivering poised vocal performances. Around the one fixed point – the bar of the Garter Inn – furniture and props come and go with ease, so that there is always enough empty space to work with. There is a lot more dance than normal too. I have never really thought of this opera as full of choreographic potential, but there are now plenty of episodes that it will be hard to think of without these images in mind – Falstaff’s twinkle-toed reminiscence of his youth as a page, and a disco-style finale to Act Three are only two examples that stand out. 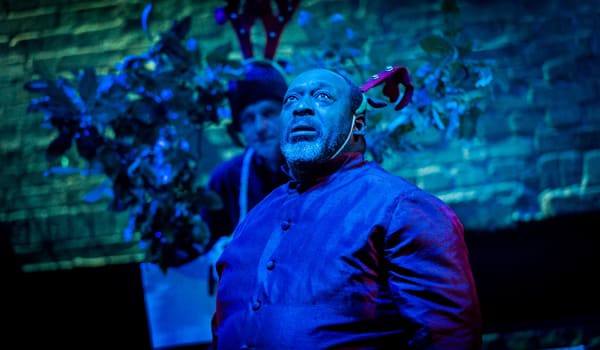 A cracking pace is all the more important because the creative team decided to run together the first two acts, which makes for a very long first half of around 100 minutes. That it passes so rapidly and memorably is thanks to the whole cast of course, but perhaps above all to pianist Jonathan Musgrave, who received a well deserved ovation at the conclusion of the evening. Repetiteurs still do not get the credit they deserve, but it is hard to see how Grimeborn could happen without them. I was initially sceptical of how this opera would sound without the extraordinary touches of felicitous orchestration that Verdi lavishes upon it. However, the touches of colour and bravura technique that Musgrave provided served to make us all forget that we were listening to a piano reduction. Incisive tempi, varied with points of repose and a wide dynamic, were at the heart of the success of this production. Ben Woodward as musical director set these for the singers, but Musgrave gave us the essential secure foundation across the whole evening.

This is not an easy opera to bring off. The singers need to be top-notch actors too and able to deliver complex vocal lines on the run. Musically it is exceptionally concentrated. Wonderful melodies zip past prodigally, illustrating the full panoply of what Verdi was capable of in his late style. We are used to composers giving us plenty of chances to hear tunes returning dressed up in different guises so that we register their full richness. Not here. Hardly any ever return, leading some commentators to think of this opera as unmelodic, a travesty of the truth. So the singers really have to be able to make the tunes register in full at the first time of asking as well as acting naturalistically. A tall order, but one this cast delivers.

There are no weak links, and there is a relaxed confidence about the ensemble that indicates that everyone is secure enough technically and in synch with the spirit of the production to be having fun. Keel Watson is a natural for the role of Falstaff. He has a huge voice when needed, and a sly, twinkly, easeful manner of deceit that allows you to see the old rogue as both crook and charmer. The darker sides of the fat knight’s inner life, skilfully interpolated from the Henry IV plays by librettist Arrigo Boito, were also conveyed with feeling and intensity. 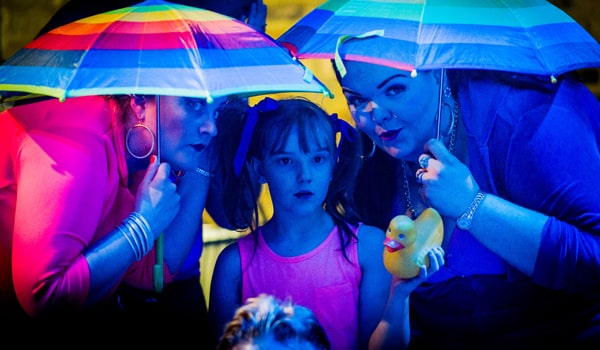 Among the other male leads, Oliver Gibbs as Ford made the most of his ‘jealousy’ aria, the one section of this opera that harks back to searing tragic intensity of Otello; and Roberto Abate, as the young lover Fenton, was full of the right kind of open-hearted romantic ardour and playfulness to cover the main aspects of his character. The comic roles, as I have already noted, punched above their weight, and they were complemented by a suitably boorish Dr Cajus in Brian Smith-Walters.

The four female leads are vocally distinctive and collaborate well as a team. In particular Catherine Rogers as Alice Ford was vocally imposing and provided leadership and comic invention, and Lindsay Bramley as Mistress Quickly played up the potential for mischief-making in her role. All in all, these performances were much less staid and self-righteous than is usually the case. I have seen these roles played before as ‘Desperate Housewives of Windsor’, but not as a bunch of Essex Girls, and it was a refreshing change. Whoever designed the costumes – not named in the programme – did a great job in ‘matching’ garish clashing colours with plenty of suitably tasteless bling.

Not everything is perfect. For some inexplicable reason the surtitles of the excellent modern translation of the libretto were projected in a way that left a large section of the audience unsighted, and I also thought that rolling Falstaff into the orchestra with the laundry was a tad weak as a way of dramatizing his dumping and dunking into the Thames. But never mind: this evening had so much going for it, so much more genuine comedy in fact that one finds in many a traditional production that it deserves the highest accolade.

Find out more about the Grimeborn Festival