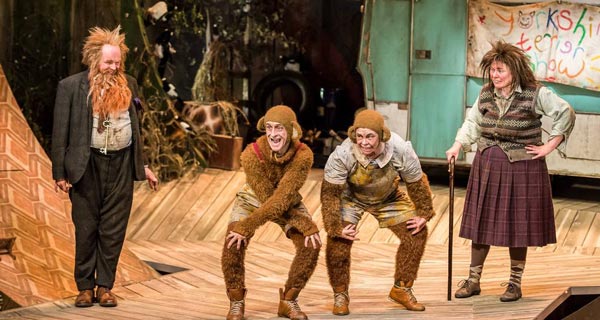 If you happen to find yourself on the underground anywhere near Sloane Square near show times this month you may be alongside large numbers of younger playgoers brandishing a slim green paperback. This is will be The Twits, the Roald Dahl original, first published in 1980, and now playing at the Royal Court in Enda Walsh’s new adaptation, directed by John Tiffany. With both Charlie and the Chocolate Factory and Matilda still playing with great success elsewhere, this is the latest attempt to bring Dahl’s unique alchemy of moralised, uplifting, yet also disturbing, and quirky childhood adventure to the London stage. However, unfortunately this current adaptation cannot stand alongside those two multi-layered yet flexible masterpieces with any great conviction.

Part of the problem lies with that original slim volume which does not lend itself readily to a theatrical format. It is a short book which is strong on core characterisation but weaker on plot. The book’s origins apparently lay in Dahl’s detestation of beards (what would he think of contemporary London life?) and his determination to depict a couple of peculiarly horrid physical attributes and personal demeanour. The literary energy therefore goes more into depiction rather than narrative. Mr Twit’s infested beard, Mrs Twit’s glass eye command attention; and their devising of mutually competitive and ingenious pratfalls for each other and for the family of monkeys they hold in servitude generates a sequence of repetitive cruelties that lack variety of emotional tone, and in the end become tedious. As if conscious of this problem, our self-described ‘mischievous’ adaptor has spatchcocked a sub-plot into the action to sustain the evening. After the leading characteristics of the two Twits have been established and we have all winced and grimaced at the monkeys compelled to stand on their heads, the worms in place of spaghetti, the glue traps set for birds and the unspecified horrors of ‘The Shrinks’, we are then introduced to the three members of a travelling circus troupe, who are inveigled into this menage of horrors in the hope of regaining their circus, which the Twits have stolen from them at some earlier point. Each of them – Yorkshire Terrier Man, Tattooed Fortune-Teller Lady, and Handsome Walzer Boy – are then ritually humiliated through a re-enactment by the Muggle-Wumps (monkeys) of their ensnarement by the Twits. This is done with great energy by all concerned and takes up much of the first half of the play. Unfortunately the result is both tedious and distasteful, without the variety, ambiguity and nuance of tone that Dahl finds elsewhere. In fact on the evening I attended even the younger members of the audience were subdued in their response to this sequence of petty, remorseless cruelties and humiliations. Perhaps it is heavy-handed to invoke Hannah Arendt’s line about ‘the banality of evil’ at this point, but all the same, there is little dramatic life to be found in such an endless parade of discomfiting actions. The Twits, unlike Miss Trunchbull, for example, are just too two-dimensional for sustained interest. Their motivations are trivial and inconsequential, and so too in the end are their antics. When the moral compass does spin at the end of the story, it is really too late and too arbitrary to have much impact in making sense of what has gone before. Of course, as in all works of this kind, moral order is restored: The Twits go to their deserved fate, and the Muggle-Wumps receive justice and freedom in parallel. However, redemption only convinces in the wake of complexity and difficulty and challenge, for the characters and for the audience as well. If the work has not been done and the sympathies of the audience remain unengaged then it is really too late. In this case the enervation has set in too early for the ending to make a difference or to alter established impressions and reactions.

In the best of Dahl’s work the same material bifurcates beautifully to speak separately but simultaneously to both children and adults; and while there is an attempt to do this here the message is not made clear enough. Both the story and the adapted play emphasise the contrast between the sterility and negativity of the Twits and the buoyant family unit of the Muggle-Wumps, and – more indirectly – the circus ‘family’; but this is not developed or shaded in any significant fashion. The Twits are defined as posh-sounding, middle-aged, sly and thuggish, with a set of values that might place them in the UKIP camp: morris dancing to Elgar’s Pomp & Circumstance, and slighting remarks about all outsiders and foreigners. But these are assorted gestures rather than a clear statement of identity. I thought at one point, when a caravan became a focus of the action, that we were going to be presented with a mirror-image of the values of Jerusalem, a kill-joy snobbish middle-class refutation of the life-affirming spirit of ancient Arthurian Carnival which so enraptured audiences at the Royal Court not so long ago. That would have been witty and plausible and appropriate; but, if this was the director’s intention it was never properly embedded or sustained.

In a spirit of charity lacking in the tone of much of this production it is only right to acknowledge the hard work of the actors and the proficiency of the technical team. All the players, but especially Jason Watkins (Mr Twit) and Monica Dolan (Mrs Twit) relished and seized their opportunities for gothic grotesquery of many different kinds, and set designer Chloe Lamford and Steven Hoggett (Movement) do a fine job in keeping the actors mobile in a limited space, and devising a porthole/circular drum as the main controlling structure for the set. This was used to very good effect throughout the action and was the most impressive aspect of the ultimate denouement. However, these fine supportive contributions cannot compensate for the hollowness of this venture, which does not sit easily with the Royal Court’s exemplary radical traditions.