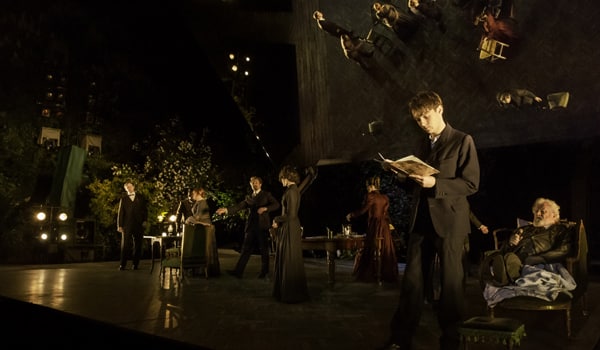 It was 1895 when Anton Chekov’s The Seagull made its inauspicious debut. It was accounted a failure when first performed, but its fortunes were transformed when Stanislavsky and Nemirovich-Danchenko opened the Moscow Art Theatre season with a revival of the play.

To celebrate the 120th Anniversary of the play, Torben Betts was commissioned by Regent’s Park Open Air Theatre to write a new version of Chekhov’s first success and one his his ‘big four’ (the others being Uncle Vanya, Three Sisters and The Cherry Orchard). Matthew Dunster’s production of that adaptation is now playing and there is likely to be one thing upon which everyone can agree: No one has ever seen a production of The Seagull quite like this.

In the programme, Emeritus Professor of Russian Drama Cynthia Marsh says of the original:

“It is a critical and quizzical view of that demi-monde around writers, the theatre and actresses, the heartache and tragedy often felt there. Above all, a question mark is raised over what they are all doing: what is art? what is theatre? and an implicit but not fully developed much bigger question, what is life?…His intimate understanding of the mechanisms of theatre, his discarding of the melodramatic style still so popular…led him to unpick the pretensions to realism the theatre had begun to espouse. The play is immersed in contemporary debate on the aims of art in general and theatre in particular.”

Betts’ adaptation (re-imagining is perhaps more accurate) certainly tries to evoke the same effect Chekhov must have had on his original audiences. There is a robust modernity about the language which makes the situations and characters instantly understandable, relatable and recognisable. This comes at a real cost to the lyricism that Chekhov penned, but, in the end, the clarity of the understanding is worth it. For some, no doubt, the text will be too coarse, too vulgar – but it distils the essence of Chekhov’s intent in a coherent and tangible way.

Dunster’s directorial vision, however, somewhat obfuscates Betts’ skill. It’s not fatal, by any means, but there are odd stylistic choices which are bizarre: every scene is punctuated with an extremely loud, magnified noise (which may or may not be the amplified sound of a revolver being cocked – if someone knows, please, do tell) which jars and unsettles; the set is dominated by an angled mirror which, late in the second Act, becomes a strange bright-light beacon, shattering the sense of realism achieved by staging and acting; the lake, very much a presence in Chekov’s vision, becomes tangible and, in the first Act, the servants swim in it it, naked and defiant, and in the second Act it becomes an interpolated further and unnecessary reference to Hamlet.

More than that, and carrying more consequence, is Dunster’s idiosyncratic fusion of styles. Happily, his overall approach is comedic; rightly, he eschews that tiresome “Chekhov is dreary and worthy” approach. The first Act, in particular, is vastly enjoyable. But in the second Act, perhaps as a nod to the differing forms of theatre which are important to the central characters, realism gives way to disparate styles: pageantry, avant-garde and melodrama. Nothing is made clearer or better by these odd decisions, which, in the end, detract from both Betts’ work and Chekhov.

Still, not all of the directorial decisions ring hollow. The use of recorded voice-overs to serve as a representation of the inner feelings of characters is surprisingly effective. There is a sprightly energy about the pacing and the performances which makes the sense and mood of the characters easy to understand and follow. Crisp brevity is the fundamental approach, so that when the pauses and halting passages come, they are particularly striking. Dunster shines light into the dark spaces Chekov and Betts weave into the narrative: in many ways, this is the clearest telling of this tale for many a year.

The selfishness and self-centredness of the characters is beautifully conveyed. Much of the dialogue is spoken over the lines of others, demonstrating the speaker’s lack of care or concern about the person or persons being spoken over. The prickly familiarity of long held associations is cleverly conveyed, as is the painful unrequited love of so many of the characters. Fiery frenzy, mad passion, silent regret, and subdued longing – Dunster’s direction carefully etches out the different pain experienced by the different characters.

For the most part, the casting is excellent and this, too, helps with the effectiveness and immediacy of the piece – and the humour.

Simon loves Masha who hates Simon but loves Konstantin. Konstantin adores Nina and does not notice Masha; Nina briefly loves Konstantin but falls heavily for the older Boris, who is the lover of Irina, Konstantin’s mother. Dr Dorn also loves Irina and he is loved by Paulina, who is married to Ilia (they are Masha’s parents). Peter owns the estate where Masha and her parents live (Ilia is the farm manager) and there are other servants there – Yakov and Natasha. When the play begins, Konstantin is preparing for the debut of one of his plays, which will star Nina, and which will be played on the estate grounds for the assembled group of mis-matched unrequited lovers. 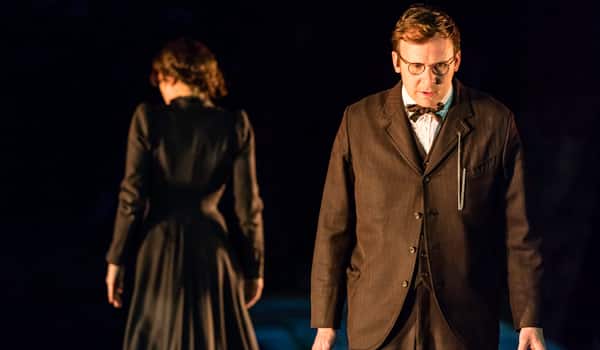 Colin Hoult is outstandingly good as Simon, the teacher who adores Masha but who endlessly discusses his lack of money. Hoult is comic perfection, bringing an exact combination of fussiness, boorishness, and naivety to his performance. His social awkwardness is delicious and it is impossible not to feel sympathy for him.

As Masha, Lisa Deveney is wonderful: acerbic, intelligent, endlessly mourning, defensive and desperate. Her longing for Konstantin is tangible, and she takes her frustrations out of Simon, unkindly, but to good comic effect. Deveney has a fascinating throaty quality to her voice, and can use it to good effect, whether for rage or frustration. She and Hoult make a magnificent combination.

Janie Dee is utterly at home as the fading superstar actress, and she completely makes Irina insufferable and adorable all at once. The scene where she is comparing her attitude to life against Masha’s is pure comic bliss, and Dee makes it soar. Later, there is an almost unbearably beautiful scene with her estranged son, where she fluctuates from caring, caressing mother, bandaging a wound, to bored, annoyed prima Donna in the space of a heart beat. Dee is a fine actress and her work here is quite exquisite.

Because Dee is so strong and vibrant as Irina, Matthew Tennyson’s pale, fey but splendidly bright Konstantin works perfectly against her. He is his mother’s child absolutely and Tennyson is adept at showing this. But he is haunted by inadequacy and his desire for Nina, and Tennyson shows that clearly too – he is funny too. His work in the scene where he is putting on his play is hilarious. 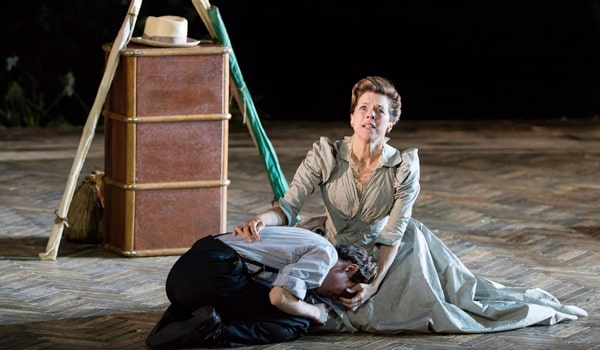 Ian Redford is magnificent as Peter Sorin; crusty, belligerent, determinedly sad, awash with the horror of a life unlived. He brings a dyspeptic splendour to his every move. Danny Webb’s Dr Dorn is just as good – a wise, lonely man with a secret past. He brings an open-mindedness to the entrenched positions on theatre and art, so is a real ally for the troubled Konstantin. Webb manages an easy affability and a profound sadness all at the same time. His final words were very powerful.

The one serious mis-step lies in the pivotal role of Boris Trigorin, the established writer who dashes the spirits of both Irina and Konstantin by his affair with Nina. Alex Robertson seemed in a different play entirely – perhaps this was a deliberate directorial decision, as Boris is the true outsider to the estate and the lake. But, even so, Boris’ contribution to the piece is critical – this was the role Stanislavski took, and is often considered one of the greatest male roles Chekhov wrote. But not here. There is no sense of masculine power and intelligence in the portrayal, and it is impossible to understand why the part is played the way it is.

Both Sabrina Bartlett’s Nina and Dee’s Irina suffer because of Robertson’s eccentric turn, Bartlett more than Dee. Nina becomes defined by her intoxicating adoration for Boris and without a strong anchor from him, she is left somewhat floundering. But Bartlett does her best, and her scenes with Tennyson are excellent. Her voice is slightly too shrill too often, but she has a sweet and engaging presence. Konstantin’s desire for her is never incomprehensible.

The rest of the cast are all very capable, although Fraser James’s Ilia does slightly wear out his welcome with the laughing-at-his-own-jokes trope.

Jon Bausor’s set is remarkable. The sense of the estate and the lake is beautifully conveyed and looks incredibly real, helped considerably by the Regent’s Park setting. There are gardens and trees, and the lawn looks effective both on the ground and in the reflection of the giant mirror. When the indoor scenes occur, the grass is removed and splendid parquetry appears, cleanly creating the effect of Middle class sensibilities. Apart from the moment when it becomes a light beacon, the mirror is a clever conceit. Reflections are important in the play and the mirror symbolises that, while also permitting interesting perspectives on the action.

There is much to admire and be dazzled by in this clever and intelligent production. But Dunster’s gets slightly too clever towards the end of the play and the final scene, in particular is poorly handled, far too melodramatic to be as painful and sad as it should be. Still, this is a version of The Seagull to be savoured.