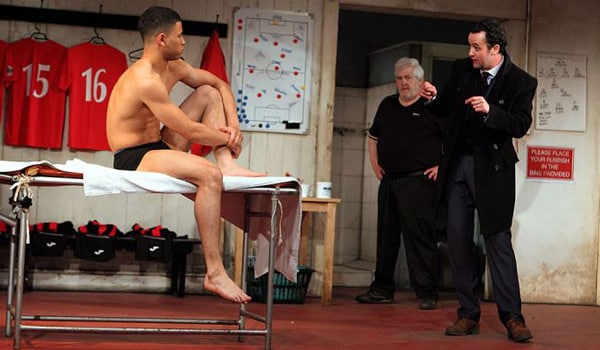 The one incontrovertible fact about Ian Rickson’s production of Patrick Marber’s new play, The Red Lion, which opened tonight in the National’s Dorfman Theatre, is that Calvin Demba is a rising star of the stage and definitely one to watch out for. He showed tremendous potential at the Royal Court in The Wolf At The Door and he demonstrates here that he has a fluid, easy assuredness on stage, and that he can make even the most improbable of situations, traits and dialogue fuse into a coherent, understandable and believable character.

On the surface, Marber’s play is about football, the rituals, taboos, tricks and hierarchy that surround and support it. The Red Lion is a non-professional league club, founded a long time ago by a group of men who saw a need in their community for a mechanism to bind and give focus to that community. The three characters in the play are all inextricably linked to that club, a place which now barely survives, is hungry for income, and which relies a lot upon the kindness and generosity of the volunteers who love the game more than life.

Demba plays the youngest of the three, the new prospective “star” of the team, Jordan. Peter Wight plays Yates, once a legendary player, then a coach/manager for the Club. But Yates lost his way, had a break-down of sorts, and now tends the club as an old retainer, keeping the locker room clean and supplied, the lads of the squad focussed and loose, ready for action, and watches – everything. The games, the Board, the Volunteers, the players – he is known as “The Lege” (short for legend) and is the unsung elder statesman of the meadow.

The third man, the aptly named Kidd, is played by Daniel Mays. Kidd is the club’s current Manager, a wheeler and dealer wannabe, all mouth, manipulation and mysterious banter. Part kidder, part child, all desperate chancer, Kidd is the most ostentatiously male of the three, but it is a facade, one that crumbles as the various game plans are fumbled.

But Marber is not writing just about football. The play is fundamentally about notions of masculinity as well as about modern society. The trio represents a kind of football holy trinity – all connected, and representing father, son and spirit. Which of the trio fulfils which role is not always clear, sometimes shifts, and this is perhaps the most interesting aspect of Marber’s play.

Each of the men has not had much love, if any, in their lives. Each has no functional relationship with a woman. Those that are fathers don’t see their children; real affection seems ephemeral and undesirable. All emotion, all energy is channeled into football. The play examines, in some detail, the cost of such choices. A hug turns out to be the cathartic moment of the evening.

As well, there is well trodden ground about the way professions and crafts have given way to business models and cut-throat profitmaking. It is interesting to hear that debate played out in this odd tribal context, and somehow it seems more compelling in this arena of sweaty jerseys, mud soaked socks, cheap suits and football pitches than it has in countless other dramas centred on boardrooms and corporate garb and jargon.

Marber is an expert plotter and a cunning deceiver of audiences. The Red Lion is no exception. Characters are set up in a particular way and then behave contrary to expectations. Or, at least, that is how things seem. But, as is usual in Marber, things are not always what they seem, and the narrative has more twists and turns than a Level 10 Cyclone.

Demba is adept at displaying Jordan’s naivety as well as his darker, more complex side. He is agile in every way, as a footballer, as a rising star of the game, and as a quick study, though not necessarily a sensible one. He manages the trick of making Jordan’s faith reconcile with his actions, and he and Wight establish a nuanced and completely believable friendship.

Wight is compelling as the sad, lonely, committed club man, whose life is entirely centred on the game and The Red Lion. The team substitutes for his family and the wheeling and dealing that accompanies club business never is far from his mind. Yates has ritual embedded in every fibre of his being, and Wight makes this elegantly clear in both his exchanges with Kidd and Jordan, and in the painstaking repetition be brings to his activities in the locker room. So completely whole and believable is Wight that the final scenes are incredibly moving, however inevitable.

As Kidd, Daniel Mays is endlessly acting. He never really inhabits the character of Kidd properly, with the result that the depth Demba and Wight bring to the play is absent from his performance. The role calls for a harder, more determinedly desperate shyster; yes, the glib talk and facile superiority is essential, but for the complexity of the play to work as it might, there needs to be more danger, more madness, more extremity – as well as more vulnerability – in the performance.

Rickson’s directs proceedings with a sure, clear hand. Happily, he is unafraid of silences and uses them to great advantage. Tension is often high and laughs come as necessary, unforced and integrated perfectly. Anthony Ward’s realistic design of the locker room and shower/toilet facilities is as grubby and well worn as it should be, effectively and instantaneously establishing mood and atmosphere. Hugh Vanstone’s lighting and Ian Dickinson’s sound design combine to heighten the mood and temperature of the play and Stephen Warbeck’s original music is moody and suspenseful. The production values are very high.

This is an intriguing and mercurial play. It is not Marber’s best writing (the situation brings with it trite dialogue in spades) but it is one of the best productions of a new play the National has offered in some time.