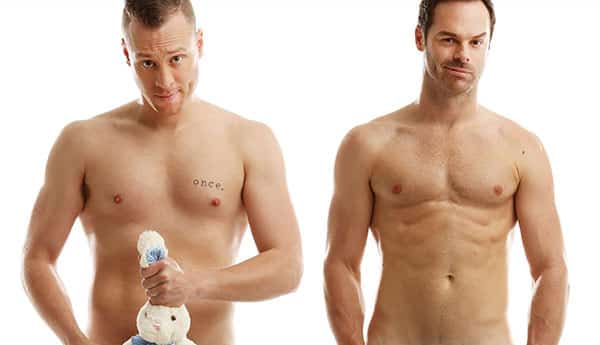 Australia has had great success over the years with quirky, comic double acts, whether it be the absurdity in the Umbilical Brothers physical comedy or the unashamedly in-yer-face Puppetry of the Penis to name just a few.  The latter grew to have quite a following in its own right.  One of their latest “exports” has a flavour of that show and is firmly geared towards an adult audience promising both nudity and magic.  The production in question is the originally named, The Naked Magicians, and, frankly, it pretty much does what it says on the tin – however, with far more taste and class than I imagined possible.

The Naked Magicians (Mike Tyler and Christopher Wayne) have just finished a successful run at the 2016 Edinburgh Festival Fringe – but don’t be fooled, this is no ad-hoc, knock-about, hashed together, flimsy show with the promise of naked men the only thing to gather a crowd.  It is far more cleverly crafted than that, and whilst those seeking their share of Aussie flesh will not be disappointed, this charismatic pair perform with real commitment, genuinely amusing moments of clowning and have a great rapport both with each other and the audience.  Having said that, I do not want to over analyse what is undeniably a great deal of fun!  The show is incredibly slick and certainly keeps you waiting for its final “coup de gras”, keeping the promise of nudity more as comical titillation resembling at times what you might more closely associate with boylesque as opposed to gratuitous nudity.  The production premiered in 2014 and since has toured to over ninety cities worldwide, yet this show is far from tired.  What becomes apparent incredibly quickly is how much fun Tyler and Wayne are having throughout the performance, and such play and cheekiness is truly infectious.

There is a real party atmosphere as you enter the theatre, and the sense of mystery is heightened as every member of the audience is given a sealed red envelope before the show starts and instructed not to open it until told to by the performers.  The music is pumping inside the auditorium, and a “party” atmosphere is quickly established as people take their seats.  There is no hiding what kind of show this will be as the minimal set swiftly establishes; most notably a mysterious, suspended locked box and at the other side of the stage, an inflatable sex doll.  The production, to its credit, makes no pretence about this being anything other than for an adult audience – nor does it apologise for it, as those who are easily offended by choice language or adult themes, are directed to “f*ck off!”.

One of the few “issues” I had with this show, however, was that it got off to somewhat of a false start.  After the lively atmosphere has built and firmly established in the auditorium there is a “warm up act” before we even encounter the duo.  It is probably a little unfair of me to refer to the comic that appears first (Maureen Younger) as a “warm up act”; she is feisty and entertaining, and certainly owned her time on stage – perhaps it would be more accurate to describe it as a double bill, but for the purposes of building towards the “main act”, it somewhat deflates the atmosphere and takes the wind out of its proverbial sales.  This is not the fault of Younger, whose material, whilst not being particularly “cutting edge” or “new”, certainly gets the audience laughing, but there is something inherently wrong in the structure of this format, as after her brief time on stage there is an early interval and the energy in the theatre somewhat dissipates.  She is clearly very able but the sense of momentum that should have been there to drive towards the raucous happenings that are to follow was not present and consequently did not serve the piece as a whole.  Happily, would I have watched her act – and indeed would watch her again, but here somehow it felt misplaced.

After the brief break in the evening’s entertainment, the music is once again cranked up and Tyler and Wayne burst onto the stage with an abundance of energy – their polished showmanship all too evident – and the audience is once again in a party mood.  Reviewing a production such as this can be a little strange, to say the least; sat in a darkened auditorium, alone, attempting to critique what is unfolding before you.  And there certainly were times, where it felt a little like I had accidentally stumbled into a hen do, but the humour is very inclusive irrespective of gender or sexual persuasion and undoubtedly everyone was having a good time.  Audience participation features heavily throughout the show, but is done so in a manner that is not embarrassing (for the audience or the participants), and much to the credit of the performer’s improvisation and quick wit – not to mention some particularly “game” volunteers – some really memorable moments are created.

I have to say, the magic is not bad either!  There are some genuine moments of amazement and dumbfoundedness as predictions are made, phones disappear and reappear, bras are removed and clothes vanish, all culminating in a giant shredded tissue ejaculation (you will see what I mean).  The jokes may at times be obvious but are handled in such an endearing yet cocky manner that you cannot help but laugh, and as the inevitable journey to nudity draws close, it is clear that everyone has had a good time.

Will you see better magic elsewhere?  More than likely.  Will you see more nudity at other destinations?  Probably.  Will you see the two together at another venue?  I doubt it.  And will they have the same on stage chemistry and tongue-in-cheek, macho, self-deprecating sense of fun?  Not a chance.  So, get the babysitter booked.  Leave the kids at home.  And get along to the Trafalgar Studios and enjoy.

BOOK NOW FOR THE NAKED MAGICIANS AT TRAFALGAR STUDIOS