Paul T Davies reviews Michael Sheen and David Tennant in the lockdown web series Staged 2, which is now available to view on BBCiPlayer. 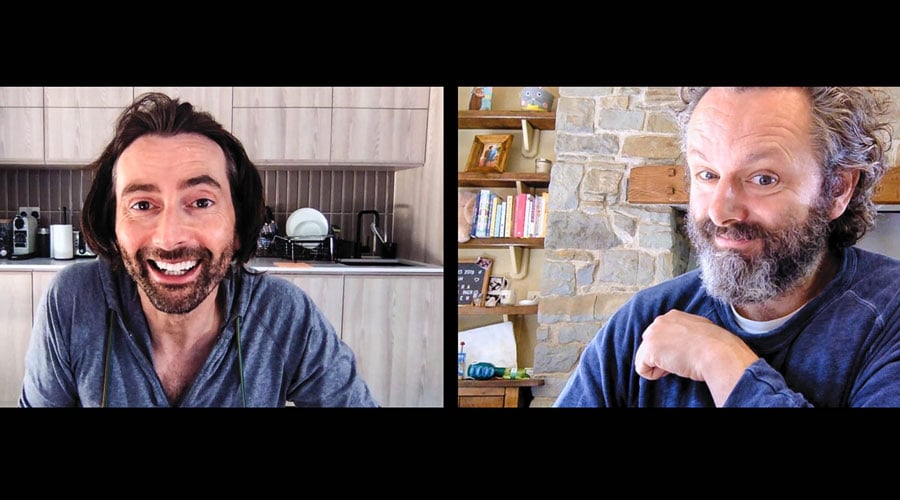 Things are getting very meta now. The hit of the first lockdown, in which two much-loved actors, Michael Sheen and David Tennent, play versions of themselves trying to keep their creativity going, returns on the day lockdown 3 is announced. Sheen even says, “hopefully we’re not going to go into another lockdown”, as they discuss projects due to happen. Even more layers are added as the first episode looks back to series one as the boys are interviewed on Ramesh Ranganathan’s online chat show. They expertly show the difference between their professional appearance and the masks slipping when fellow guest Sir Michael Palin tells them off-camera that he doesn’t find them funny. All the time they deny that the people we see on screen are the “real” Michael and David. It throws the viewer off nicely, until we return once more to the actor’s homes, and the possibility that Staged will be remade for the American market. In just that first episode there are so many clever references to the previous series, and also good jokes such as Michael Palin’s online reading of Waiting for Godot.

The possible recasting of Staged gives writer and director Simon Evans a terrific spur to develop the series, and he lampoons himself gloriously, “It wasn’t improvised, I wrote it!”. The women wryly observe, from the side-lines, that “Simon can’t write women.” One of the many joys of the show is the guest stars, and it works much better when you don’t know who is going to crop up on the screen, so I will avoid spoilers! Episode three, The Dirty Mochyns, (as usual, great to have Welsh in the series, and for many Welsh people like me, we know exactly what that means, and were probably called it by our parents growing up), is fifteen minutes of distilled joy as Michael and David agree to “coach” other actors auditioning for their roles, and they aim to sabotage their chances. The new pairing begin to behave exactly like Michael and David, and even begin acting, without knowing it, dialogue from series one. It’s a hugely enjoyable labyrinth of performance that then escalates with each episode as they try out scenes with a succession of unsuitable replacements. David’s poetic angst and Michael’s Paddington Bear glare are increasingly employed, and it feels as if your telly is being dismantled to show you how fake it all is!

But there is a truth that emerges, and that is the pressure we all are feeling during this pandemic. As Michael increasingly frets about not being able to go to New York and be best man at his friend’s wedding, he breaks down spectacularly whilst online with another “David”, and they both echo how we feel about staring into boxes and screens, we just need to hug someone. It’s beautiful writing and the comedy works so well because there is a lot of love between all of the “characters”. As Simon is required to do rewrites and he begins to rely on the two actors more, the announcement of the new “David and Michael” is an unpredictable joyous bit of casting! At eight episodes, it does feel a little that it could have been wrapped up in episode seven, but it certainly feels if the gang have arrived once more in lockdown to help us get through it.