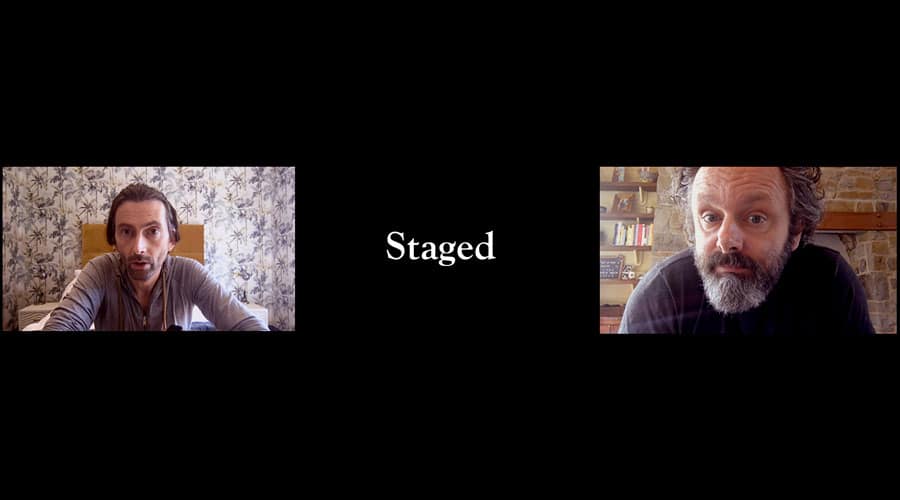 While we mourn the continuing closure of theatre and the seemingly almost silent response to the crisis by the Government and media, here is a genuine lockdown treat. Michael Sheen and David Tennant play versions of themselves, (I suspect only their loved ones will know how accurate this is), who were due to put on a play in the West End before Covid19 put everything on hold. The play’s director, Simon Evans, is worried that his big break will pass him by, and he persuades the actors to carry on rehearsing Six Characters in Search of an Author online.

It is an absolute joy, mainly because of the chemistry between the two leads, who not only get on with each other, but are so willing to send themselves up and revel in self-deprecation. Sheen is all beard and wild hair, distracted by the slightest noise, “The birds have returned to Port Talbot”, a hermit in his kitchen and he comes across as an aggressive Paddington Bear, with a fixed stare that freezes the screen with disapproval. It’s wonderful to hear Dylan Thomas and the Welsh language in the first episode, and it’s clear his role is the more volatile character, Tennant appearing more willing to try things, to persuade his friend to have a go at keeping the script fresh. He is equally hilarious, seemingly needier and seeking approval, not coping very well in isolation. Of course, they never do much actual rehearsing, the two bicker about their names in the credits, (one of the many successful running gags), critique each other’s performances, past present and future, and comment on lockdown lifestyle.

But the show works not just because of the two lead actors, a terrific ensemble begins to develop. I found Simon Evans, (who is also the write and director), absolutely hilarious, his anxious face filling the screen as he tries to cajole the stars into playing, (a hilarious warm-up gag. Cookie Jar, pays off beautifully in the final seconds of the series), and his anxiety increases every time Sheen just appears on camera. Equally hilarious is Nina Sosanya as potty-mouthed agent Jo, who knows strings to pull and actors to avoid, and Tennant’s wife, Georgia, is brilliantly weary and supportive, David very much her third child, ending homeschooling at 10.30 “because there’s only so many ways a 4-year-old can draw a rainbow.”  Anna Lundberg is also brilliantly patient with Sheen, and it feels as if at any moment any one of them will crack and end up screaming into the abyss. Of course, they pull through!

Then there are the wonderful guest stars, including Samuel L Jackson, who wants his part in the playback, Adrian Lester, who is brought in to try and reconcile the two friends, only to have his isolation ambience punctured by Sheen and Tennant, and, gloriously in the final episode, one Dame to Rule Us All, who, naturally, steals the whole show! There’s also a subplot involving Sheen’s neighbour that lends poignancy to the situation, and the whole production shows that Invention truly is the Mother of Necessity, a glorious response to the current crisis. Of course, it dangles in front of us the tantalising notion of Sheen and Tennant on stage together, if not Six Characters, but maybe the play David writes?

Stuck at home? See what else is streaming due to theatre closures at the moment.