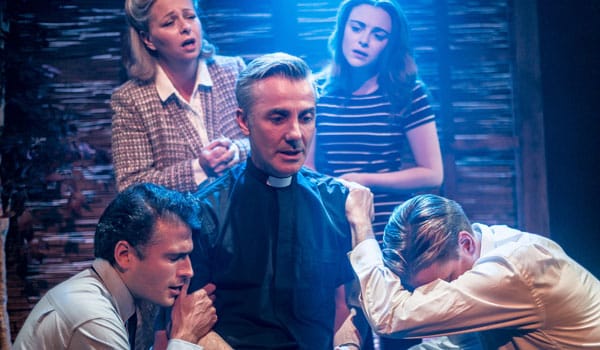 In the liner notes for the world premiere recording of Michael John LaChiusa’s See What I Want To See, Oskar Eustis, then Artistic Director of The Public Theatre (New York) wrote that the musical is:

“…as rich and complicated as life itself, as full of contradictions and oppositions as the astonishing artist who created it. Based on classic Japanese short stories, the musical is not only set in New York, it has a profoundly American sensibility. Tough, unsentimental and clear-eyed, it is suffused with a profoundly romantic yearning for belief, an aching, open desire for faith that comes from an unmistakably honest core. Deeply suspicious of narrative claims to truth, the storytelling moves in a compelling, breathless forward motion unrivalled in the contemporary musical theatre.

LaChiusa tells astonishing stories, electrifying and dramatic, with a dramaturgy that is deeply imbedded in the texture of the music itself. His music is never simply illustrative; while the melodies have the kind of beauty and staying power one associates with the great musical theater tunes of the 20th century, they also form a consistent web of commentary and counterpoint to the libretto that deepens the narrative experience in an astonishing way…

Listen throughout to how LaChiusa’s rich musical textures incorporate Asian, jazz, pop and classical influences into seamless storytelling. His story proclaims the desire for a miracle; his music is the miracle itself.”

Eustis was, and is, spot on in his assessment of the piece.

Ten years have passed since See What I Wanna See opened off-Broadway, but it is still a remarkable and thrilling contribution to the American Musical canon. Like some child of Rodgers, Weill and Sondheim, LaChiusa has a mastery over melody and meaning; his music is difficult to sing but glorious to hear. The fusion of styles is beguiling, the sense of romantic investigation wholehearted. The score unfolds and embraces equally, the patterns and textures in the musical landscape are both foreign and instinctive. 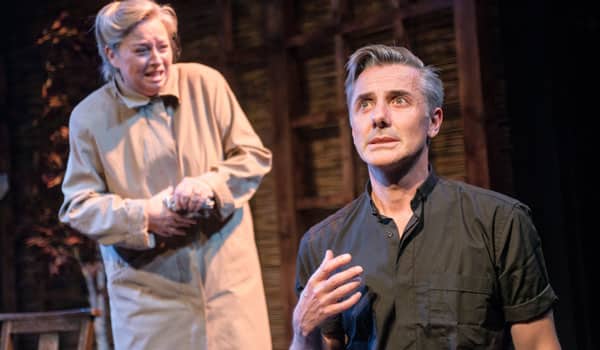 This is grown up musical theatre. It invites you to think and participate and be rewarded.

Each Act opens with a vignette, steeped in the Japanese style. It evokes Kabuki with ease. An adulterous couple are coupling in a final carnal embrace. In the first Act, the woman intends to murder her lover; in the second, the tables are turned. The raw, heat-filled encounter sets the tone for the story that then unfolds.

Both Acts investigate multiple viewpoints about a single event. Every witness sees something slightly different, or so it seems. The memory creates the truth, perhaps by legitimising fiction. Perception becomes meaning. Truth is elusive, secondary to conviction.

In the first Act, there is a murder investigation. In the second, a fake miracle dominates. The premise might be different but the narrative approach is the same: as the story develops, details emerge from or because of the perspective of an odd assortment of characters. Each adds or detracts from the perceived facts; but the whole is a shimmering web of connectivity that sees each character reveal him or herself or come to terms with their own truth.

The set design by Simon Anthony Wells is simple but effectively evokes a Japanese sensibility, particularly when James Smith’s lighting turns the bamboo effect intensely blood red. The small space proves slightly challenging; with only one entry point for the cast, some moves are necessarily clunky and awkward.

Director Adam Lenson has form with LaChiusa’s work. The programme reveals he directed the non-professional European premiere of the work in 2006. But this familiarity did not result in any particular illumination or vision in this presentation. The opening vignettes are not played stylistically enough, there is insufficient sexual chemistry, hunger and anticipation. Without an evocative, highly-charged, positively arousing scene setter, the main narratives take longer to fly, and the audience is not sufficiently engaged in the “things are not as they seem” through-line.

In some ways, the deficiencies here are down to the skills of the performers; but their selection and how they work is within Lenson’s control. He opts for a kind of diluted film noir approach, particularly in the first Act which focusses on rape and murder. But it is by no means a whole-hearted approach, with the result quite dull, neither melodrama nor film noir.

There is a lot of “acting”. This seems intentional on Lenson’s part, as though the cast were playing ciphers rather than real people. Realistic playing would pay better dividends in this piece. In the search for truth, there is no room for acting, just being. 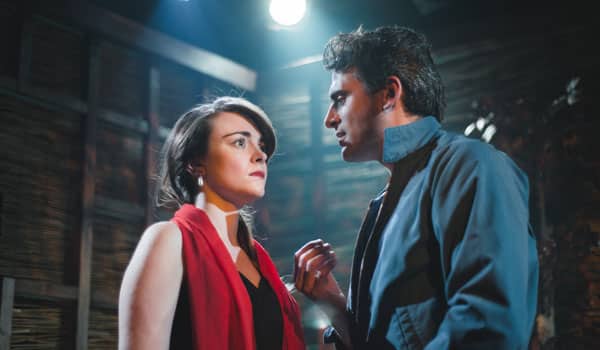 Marc Elliott is the one cast member who seems to understand this and he completely subsumed himself in his dual roles of Thief and Reporter. Sinewy, handsome, bristling with electric sensuality in the first act, Elliott is superb. In some ways, his more complex turn as the lost Reporter, a vain, pretty, and confused modern man is the superior performance. Both, though, are clever, thoughtful turns, and Elliott’s voice is equal to the demands of the score. He is proving to be a serious player in the field of musical theatre in London.

None of the other cast members match him for conviction or clarity of performance. Vocally, the score is too difficult for them, and there are quite unpleasant passages where notes are groped for rather than properly sung. There is too much cod acting from the quartet, too much loss of focus, too much off-key singing, and splattered characterisation. Elliott is believable; no one else really achieves that.

This results in whole sections of the piece being flat and uninspiring. The music cannot soar as it should because the performers other than Elliott cannot make it work. This has nothing to do with the accompaniment, which is secure and appropriate throughout and which does not threaten to dwarf the acoustic vocal performances. (Full marks to Richard Bates and the small band). Rather, it is about the way the cast actually sing. More than occasionally, there are good vocal lines from Elliott’s colleagues, but it is not consistent and not the sort of singing the score requires.

Yet, LaChiusa’s work still rewards. This is an evocative and very complex musical. It is a major achievement. It just needs a better cast and better direction than this production provides.