Paul T Davies reviews Willy Russell’s One For The Road now playing as part of the Frinton Summer Theatre Season. 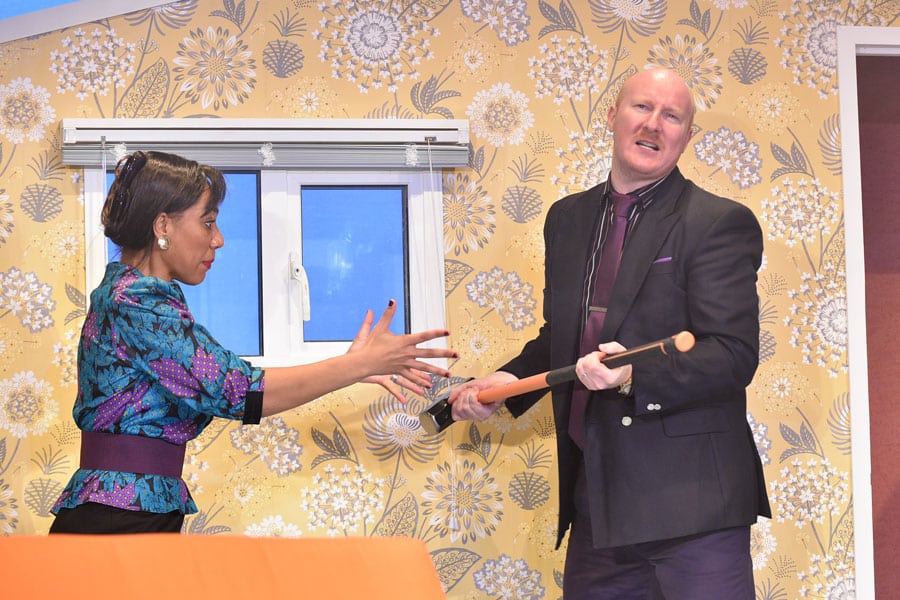 Launching this year’s Frinton Summer Theatre is Willy Russell’s 1985 comedy One For The Road, certainly not to be confused with the Pinter play of the same name! Russell’s comedy features Dennis, on his 35th birthday, raging against middle age and feeling trapped in his bland bungalow in a bland estate and bored out of his skull. He decides to pack his rucksack and leave, and during the dinner party with his snobbish and odious neighbours, the fakeness of all their happiness is exposed.

The play is dated, no one under the age of about 40 would get the cultural references, and the characters are broad, as is the writing. But it contains the Russell tropes of class and opportunity, which he went on to explore magnificently in plays like Educating Rita, and there are some affecting and poignant moments and laugh out loud one-liners!  The cast play with tons of energy and Vivienne Garnett directs with pace and precision.

As Dennis, Patrick Knowles has a perfect hangdog and woeful expression and plays the comedy very well. Verity Kirk plays Pauline, Dennis’s upwardly mobile wife with effective tension, and the quartet is completed by the snobbish neighbours. Roger, (Paul Joseph), is a boorish womaniser, (the sexual politics have not aged well!), and Tanya Loretta Dee is excellent as ultra snob Jane, the kind of woman that would make Hyacinth Bucket tremble!

it’s a good choice for Frinton, and the second act is tight and delivers the goods. A running joke about John Denver has a brilliant pay off, and there is something sinister about the way the four silently agree to carry on as normal. And the Frinton Summer Theatre is a unique experience. One of the delights is in the audience enjoyment of the play; the ladies in front of us relished the Weight Watchers gags, and front of house do a magnificent job. Interestingly, the first-night audience was a record for this theatre, and this production is also the first one to transfer into London, playing at the Jermyn Street Theatre, being a touch of the Essex coast to the capital!

BOOK TICKETS FOR ONE FOR THE ROAD

Find out more about the Frinton Summer Theatre Season