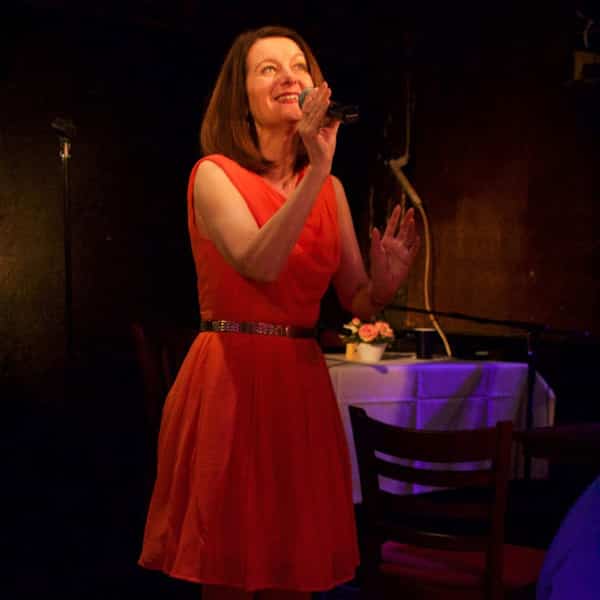 Of the many occasional evenings that arise in the programmes of London’s intimate cabaret venues, here is one with an interesting concept all of its own. Fiona-Jane, the hostess, offers to share a pot of tea with each of her guests in turn: they are a deliberately mixed bag of established and new acts and/or creatives drawn from across the richly populated terrain of musical entertainment talent.

This month’s offering was a case in point. First off, we had the splendid talents of the host herself giving us a super rendition of ‘Words’, with William Godfree on piano; although battling a cold, there was no stopping her, and she set a cracking pace. She is a great champion of the songs of Michele Brourman and Amanda McBroom, and this song Titania’s Terrible Truth, was a peach: more was to follow, with an unpubilshed gem.

The first guest was Adam Drew, one half of ‘Bounder ‘n’ Cad‘, a Cambridge-sourced double-act recently seen at the St James’s (whose James Albrecht was in attendance) and also at No. 10 Downing Street. His two songs delighted (with Ben Kermode on the keyboard): a paean to the cheeses of the world; and then a smashing, bright-as-a-button, up-to-the-minute revision of ‘Let’s Do It’: “Turtles creak and crack as they crawl to it;/ Somehow Rupert Murdoch and Miss Hall do it.” Only the young can be that cruel. (Their time will come!)

We also had the glorious presence of Adele Anderson, one of the earliest members of the eternally captivating ‘Fascinating Aida’. A capable raconteuse, we got a lot of diverting conversation, and also some of her rather fin-de-siecle sounding ‘Songs of Depression and Death’, brought miraculously back to life by Dean Austin. (You see, you only get the best people at this event.)

Then, the second half was led by Fiona-Jane’s 91st birthday tribute to one of her alter-egos, Angela Lansbury. We saw – and heard her – in very fine form as Jessica Fletcher. And finally, the evening was amply rounded off by the abundant and energetic gifts of another dazzling role model with the same name: Jessica Martin, who combined a bracing survey of her extensive acting and singing career (only the lack of space on the platform prevented us getting any dance) with insights into her equally established life as a graphic designer and creator of showbiz-themed graphic novels. Her perfect performance of ‘I Love a Film Cliche’ reminded us of her incredible skills as a mimic, and also of her passionate commitment to an industry she loves (and William Godfree accompanied beautifully). (Read our review of Looking For Lansbury)

There you have it, then. In miniature, a marvelous insight into the life and work of artists in musical theatre, with something a little bit different about it, drawing a nice crowd, reminding us of things we cherish, and giving us some brand new stuff, too. Who could ask for anything more?

Please note: As this event involves a revolving series of artists a decision was made not to award it a review rating. The lack of star rating does not imply that we did not enjoy the show…quite the contrary!