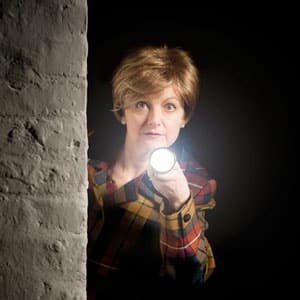 The word legend is often overused these days but Dame Angela Lansbury certainly qualifies. The star of TV, film and stage as now reached the grand old age of ninety, so what better time to look back over her glittering career and remarkable life?

Fiona-Jane Weston has taken on the daunting task; Lansbury is notoriously secretive about her private life and so Weston had to become a modern day Jessica Fletcher to undertake the necessary research. She’s been remarkably diligent in this task, uncovering letters, diaries and news articles, which are well used to add context throughout the show.

Particularly poignant was an excerpt from Sir Peter Hall, the director of the 1975 production of Hamlet. Lansbury played Gertrude shortly after her mother died; Hall’s recollections of her struggling through rehearsals were compelling and show the depth of research that Weston has undertaken. There were lots of interesting nuggets for even the most seasoned Lansbury fan; for example her daughter’s close relationship with the infamous Manson family and her grandfather’s history of political activism.

Songs are sprinkled throughout the production, mostly tunes associated with Lansbury herself. Rather than taking a chronological approach, Weston matched up the songs to represent the situation Lansbury’s was in at the time, which on the whole worked very well. They were all carefully chosen, with ‘I Don’t Want to Know’ from Dear World neatly matching the period when her first husband Richard Cromwell ran away and ended their marriage. Bedknobs and Broomsticks proved a particular crowd-pleaser with some fun audience engagement.

Fiona-Jane Weston does an excellent job, having to deal with a dense and complex script and a variety of different characters and accents. Her audience rapport is fantastic and her mimicry of Lansbury is very accurate (even according to the superfan next to me with an Angela phone display picture!). I do feel the show could have perhaps benefited from another presence on stage, like the similar Bette Midler and Me. The musical director William Godfree was very talented with an excellent singing voice and could have perhaps been used a bit more to add some variety.

The show was cleverly staged, with a box of props being used to link together the various periods of Lansbury’s life. The birthday theme was topped off with a giant birthday cake for the audience, a nice (and tasty) touch. There were a few fluffed lines and missed cues but it didn’t massively detract from the show; it was an ambitious production and the (bizarrely raucous) audience took it in good humour.

Looking for Lansbury is a fitting tribute to one of the finest British actors of her generation. The show offers education and entertainment for everyone; whether you’re a Lansbury lover or just want a fun evening.