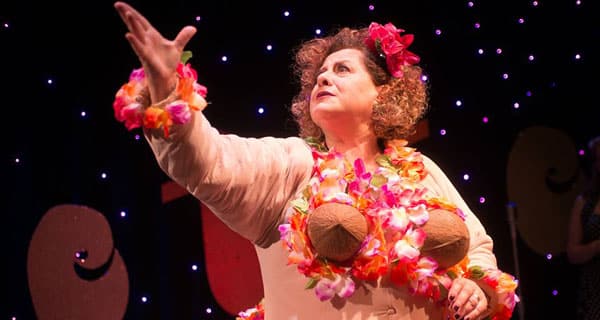 After receiving positive reviews at the Edinburgh Fringe, Bette Midler… and Me struts into Highgate for a week, before it moves on to the St James’ Theatre in October.

West End veteran Sue Kelvin fronts an intriguing mix containing stories about Midler’s rise to fame, well-loved show tunes and autobiographical tales about her own upbringing. It’s an interesting combination but it generally works well, with the highs and lows of Midler’s life often mirroring those of Kelvin.

Kelvin is candid about her difficult upbringing, weight issues and the loss of her brother; the songs are well placed and framed so that they reflect the evolving mood of the production. It is clear that Midler was a huge influence on Kelvin’s life, providing escapism from her Dewsbury childhood (a far cry from Midler’s in Hawaii) and inspiring her through drama school and beyond.

The show is quite similar in form to The Jewish Legends, a show I recently saw at the same venue, with its mix of songs, narration and wisecracks. Even though Bette Midler and Me has the same writer (Chris Burgess) this script is a lot tighter and funnier and gained more laughs as a result.

This is partly a case of better delivery (identical gags were getting a better reception) but the script was also more colourful, featuring less biographical narration and more emotional heft. Drawing on relevant historical moments such as the Stonewall Riots and the War in Vietnam provided some interesting material as well as giving valuable context about Bette and what she stood for.

The personal anecdotes from Kelvin were massively touching and it would have been nice to see this part of the piece developed even further, even at the expense of some of the Midler stories. One grating aspect was the number of fat jokes that Kelvin makes at her own expense; whilst it started as self-deprecating, it felt a bit like self-flagellation by the end.

The show finished with a comedy puppet recreation of the Midler film Beaches (for disclosure, I haven’t seen the film, as they cleverly made me confess with a bit of audience participation). Although the skit got a decent audience reaction, it seemed exponentially less funny that what preceded it and provided a rather odd ending to what had previously been quite a touching show.

The music was predictably sharp, with award-winning Sarah Travis on piano and backing vocals. Kelvin, Travis and the excellent Alex Young produced some beautiful harmonies, with The Rose and Stay With Me giving the cast a chance to show their full vocal range.

Kelvin is a fun and engaging narrator, positioning herself as a fan rather than an impersonator. Her voice is capable of considerable depth and she’s a strong storyteller. She has great chemistry with her sidekick for the evening Alex Young and the two bounce off each other really well (as opposed to the often seen revue pitfall of delivering a line and then mentally checking out until your next one).

Alex Young proves to be far more than backing support; she’s a magnetic presence on stage and has a stunning voice. Her vocal contribution to From A Distance was superb and arguably upstaged her co-star. During the course of the production, she not only sang but also played the piano, flute and ukulele. Affable and fun to watch, she’s certainly one for the future.

This is certainly a must-see show for Midler fans and thanks to an energetic cast and some sparkling tunes there’s plenty to keep everyone else entertained as well.

Bette Midler and Me transfers to the St James Theatre, London on the 2nd and 3rd October 2015