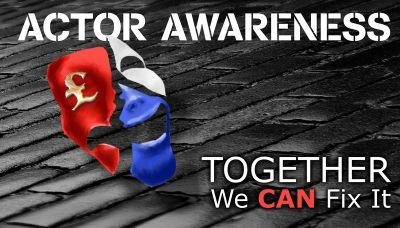 Actor Awareness’ themed scratch nights are becoming more and more popular, with this particular evening on the theme of ‘Women’ receiving over 100 submissions from which 4 were chosen. Girl power! All were to be written and directed by women, 15-minutes in length and starring no more than 3 actors. The sketches were performed for one evening only, to a sold-out audience at the Spotlight Studios in Leicester Square, and hosted by fantastic new comedian Kelly Convey, who has had rave reviews from the likes of Chortle and Time Out.

Brigid Shine’s ‘22’ is a cleverly interactive, musical and witty play with a chilling undertone of women’s freedom of choice and abortion rights. It is set in a hospital as a young woman is about to abort her pregnancy, with a comical yet questioning doctor, and a supportive best friend beside her.  Encouraging the audience to access their social media (or to refer to a ‘Twitter booklet’ for the technology-phobes like me) is not only a clever tool for audience participation, but emphasises how close we are to our mobile devices, and how powerful social media can be, with tweets such as “treat women like people capable of making decisions about their bodies” are uploaded throughout the piece. Gemma McMeel, Lisa MacGregor and Alicia Barban are very good, young actresses, and McMeel has a set of pure, stand-out vocals in the a capella songs which both begin and end the performance.

’22’ was a fantastic opening to the programme, and I was like a carp on a fisherman’s hook, reeled in by McMeel, MacGregor and Barban’s very entrance.

‘Homefront’ is a dark, fast-paced play by Rosie MacPherson, discussing the effects that war can have on an army soldier and his family, as a daughter talks to her father about shooting a fellow man dead. Any piece which starts with a Christmas song has me interested but, for me, the best thing about this piece was the actors, as both Euan Macnaughton and Charlotte East were completely immersed within their exhausted, tormented and haunted characters. The script was quite touching in places (and I especially liked the fitting description of ‘tea’ being ‘a hug in a mug‘), but I wasn’t always sure what was going on in terms of story. Despite this, the energy which emanated from Macnaughton and East had an obvious effect on the audience.

I had tighter cheekbones after I laughed my way through Vicki Connerty’s black comedy ‘Come Die with Me.’ After the death of her husband, Helen wishes for him to be home with her once more, and so has his coffin brought into the living room to rest on the coffee table. With her son, David, and daughter, Rachel, gathered together, what should be a sombre occasion turns into a farcical event. Connerty truly plays a game of ‘tug of war’ with your emotions as, one minute, I found myself choked as the the family touchingly remembered their father, and the next I was reeling at David’s light-hearted yet inappropriate comments.

Well-written and well-performed with perfect comic timing –  I wanted more!

‘Walk of Shame’ is an extended monologue, telling the story of a vulnerable young girl who is taken advantage of by a man who she misjudged, engagingly performed by actor Suzy Gill. Emelia Marshall Lovsey has written a very dark piece, including quite a descriptive rape scene, which occurs after the character is accused of being a tease, and is made to feel as if she owes her body to a stranger. Compared to the other pieces, I felt it was a little too long and, for me, there needed to be more areas of light to accompany such a harrowing script. However, the extremely exposing and hard hitting topic is dealt with sensitively yet powerfully by director Stephanie Silver, and the dialogue itself is courageous and does not shy away from cold detail. ‘Walk of Shame’ certainly brought to attention the shocking assaults that women all over the world have suffered, and continue to experience in similar situations. I felt uncomfortable watching the piece so, if that was creative team’s goal, they succeeded.

After watching these 4, very different short plays, I understand why so many people want to be involved with Actors Awareness and their scratch nights, to be a part of their success and to be given the opportunity to showcase their writing, acting and directing talents. I would happily watch extended versions of these shows, and could see the likes of ’22’ and ‘Come Die with Me’ making a home at the fringe festivals.

The next scratch night is on the theme of race, religion and culture, and submissions close on May 14th. To get involved, visit the Actor Awareness website at www.actorawareness.co.uk