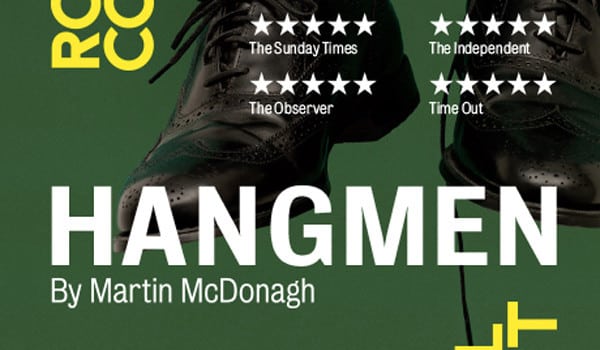 It has been announced that Hangmen by Martin McDonagh will transfer to the Wyndham’s Theatre previewing from the 1st December 2015. The production transfers following a sell-out season at the Royal Court Theatre.

In his small pub in Oldham, Harry is something of a local celebrity. But what’s the second-best hangman in England to do on the day they’ve abolished hanging?

Amongst the cub reporters and sycophantic pub regulars dying to hear Harry’s reaction to the news, a peculiar stranger lurks, with a very different motive for his visit.

After a decade-long absence from the London stage McDonagh returned to the Royal Court Theatre with Hangmen in September 2015 to critical and public acclaim, with tickets selling out for the production’s entire run. Original cast members David Morrissey and Johnny Flynn will reprise their roles for the transfer, performances which were heralded at the Royal Court Theatre.

Producer Robert Fox said: “I am thrilled to be working with Martin McDonagh again on this stunning production of his new play Hangmen, wonderfully directed by Matthew Dunster.”