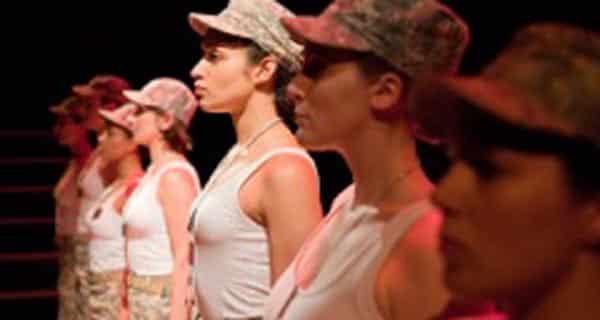 This is a harrowing but necessary evening in which the transcripts of seven interviews with American women veterans of Afghanistan and the second Iraq War are woven together into a compelling gendered commentary on the pity of modern war. We move in broad chronological sequence from the recruitment phase, with all the diverse reasons these women have for joining the armed forces, through to the experience of training, deployment, combat, occupation and ultimately (punctuated by the interval) the return home and re-assimilation – or not. The individual expositions are broken up with collective drilling and singing episodes that act as a choric commentary on the whole. At the outset I was sceptical as to how workably dramatic the scenario would turn out to be – would the experiences be sufficiently different from soldier to soldier to be tell a variety of stories? Would the themes, for all their need to be discussed, turn out to be repetitive over an evening? Would the accumulation of likely horrors just prove numbing rather than thought provoking? I need not have worried.

One of the few joys of this evening, where joy is in short supply, is the sheer range of women represented in these narratives. It is the diversity of background, experience, personality and attitudes across the players that builds up a wide spectrum of different characters through whom we learn to inhabit and explore the imaginative space of the events. As a result of the individuality of the women themselves and the variety of their responses to the trauma of war we are stretched and forced to go beyond easy assumptions about the roles of women in wartime and grapple more elaborately with the challenges posed by both violence against women and violence perpetrated by women. Some of the women are feminists, whereas others are not; some are career soldiers or from traditional military families, while others have joined up on a whim or as an act of rebellion or escape from impossible familial or domestic backgrounds. Some are attracted by the prospect of gaining skills or money or simply by the sense of structure, order and external discipline offered by army life. All are disconcerted and disappointed by what they find, but not always in predictable ways.

The monologues acknowledge first of all that in some respects the female and male experience of war must share many themes and emotions – the same problems with defective equipment and devious contractors; the same tedium of setting around waiting for things to happen; the deadening effect of routine exposure to violent death; the unreasonable and petty tyrannies of superiors; the fundamental focus on fighting for your comrades as the motivation in combat – these affect all equally. But in specific ways these monologues demonstrate the unique challenges that women in war face. Above all the actors forcefully convey the difficulty in being considered on their merits as soldiers rather than as a gender. Time and again, the individual women confronted harassment and stereotyping from men on their own side that lead up to victimization and even rape in some cases, where reporting and accountability proved to be of no benefit. This led to extremes of stress and isolation, and an inability to trust anyone at all, that sets off after-shocks that last well beyond their return to the USA. Correspondingly, other sections of these commentaries focused on the realization that to be effective in combat required a resolute refusal to acknowledge the basic humanity of the civilian population of Iraq. This was graphically conveyed by one soldier’s recognition that in order to protect her comrades she might have to run over or shoot women and children who could be about to set off IEDs. Other themes that emerged were the impossibility of maintaining relationships both within the services and with partners back home and the general loss of a sense of selfhood under the multiple pressures from within the military itself and within the context of war. Survival necessitated a refusal to think independently and look into oneself. The life of an automaton was often, depressingly, the only choice for the sake of a future at all.

The play could have ended there, with more than enough material for sober reflection; but after a brief, and much needed interval, we returned to hear about how well or not these women moved back into civilian life. It was perhaps no surprise that those who adapted best were those who had joined up with the most modest expectations and who had worked out a survival strategy of sorts that had preserved their core selfhood intact; whereas depression and the full range of PTSD embraced those who had had the highest expectations of an army career as a means of self-realisation. Most found it intolerable to be thanked for their service, simply because no one who had not been there could have understood the gap between the official version and the grim reality. The most affecting aspect of the evening for me, was the representation and embodiment of extreme loneliness that these monologues involved: most of these women were telling their stories for the first time – it had not been possible for them to share these experiences with either female comrades or close family. Warfare is often thought of as a shared experience where group bonding compensates to an extent for the fear of combat harm and death; and yet for these women service had reduced them to ever diminishing isolation on all sides.

While in no way mitigating or criticizing the focus of the evening, I do think that we could have heard a bit more about the positive and enabling role of war, which must exist alongside the specific traumatic narratives. There are hints of this in terms of opportunities for these women to gain skills and leadership experience, and experiences that involved exposure to new ideas and cultural influences. This is not deny the visceral force and authenticity of the narratives of negativity that lie at the heart of this powerfully jolting evening in the theatre, but more detail in this area would have provided extra richness, not dilution of the core message.

Overall, huge credit belongs to the creative team and actors in confronting us with this troubling material and doing so in ways that defy cliché. Long ago it was the aim of Athenian drama to force the civic community to look hard in the collective mirror provided by the updated myths of the plays performed. The stark, choric commentary and searing, individual stories told at the Cockpit achieve a similar goal by inviting us to reconsider the realities and impact of modern armed conflict from a unique perspective.