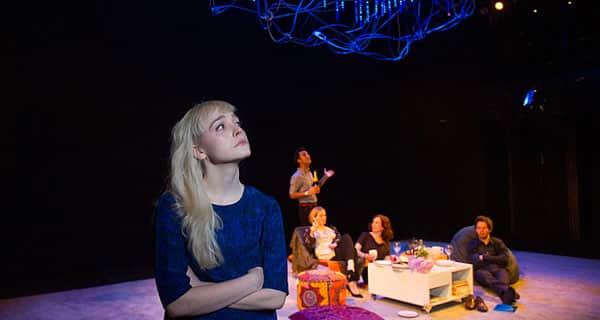 Tom Stoppard. Two words which make the pulse quicken in anticipation. Two words which conjure up a back catalogue of glorious, dazzling, clever and inspirational – often very funny – theatrical marvels from Rosencrantz And Guildenstern Are Dead, his first big success, to Rock’n’Roll, his last work for the stage, which premiered at the Royal Court in 2006 and then transferred to the West End and Broadway. Two words which were joined with the announcement of Nicholas Hytner’s final hurrah at the National Theatre, to promise the theatrical event of 2015; another scintillating exploration of ideas, another examination of scientific or philosophical issues, another text full to bursting with literary allusions and warm, real characters.

That play is The Hard Problem, now playing at The Dorfman Theatre, the first part of its run all but sold out. Lying at the heart of this play is this question: if there is nothing in the Universe but matter, explain the concept of consciousness? Exploring questions of mind and body (are they one or separate?), altruism and egotism, the existence of God, the concept of ‘good’, how hedge-funds operate (no, really) and the power of co-incidence, Stoppard’s play follows the tribulations of Hilary, a psychology researcher. While this sounds like customary Tom Stoppard fare, The Hard Problem is unique in one remarkable respect.

It is unfeasibly dull.

The real hard problem concerning this production of The Hard Problem is this: which creative is at greater fault – writer or director?

To say that the production is underwhelming is to praise it. Partly, this is because it is in the wrong theatre. The Dorfman is a space of great intimacy, and although this is, essentially, the tale of one woman’s personal struggles, private and professional, the ideas which underpin it are not intimate – they are universal, in theme and in scope. So, using the Dorfman space seems a cheat; an attempt to create interest in situation and character by the use of a smaller playing space. An attempt that fails.

It has another consequence as well. The play occurs in several distinct places. While Bob Crowley’s design finds a way to accommodate them all, it can only do so relying upon laborious, seemingly interminable, scene changes accompanied by bursts of classical music. A bigger stage might have allowed for instant transitions into more detailed settings and obviated the need for the jarring interludes necessary here only so that the crew can strike and re-set the furniture.

The centrepiece to Crowley’s design is a fluorescent light sculpture suspended from the ceiling, roughly in the shape of a human brain, which lights up in different ways and in different colours, sometimes colours which change. It’s very impressive and provides a constant reminder of one of the play’s topics: the notion of the relationships between mind and brain and mind and body: in both cases, “Are they the same?”

So the text is complex and dense, chock full of ideas; the mechanics of the presentation of the play do not especially assist with the audience empathising with the text. So, in order for the production to fly, the cast needs to be exceptional.

The best performance comes from Damien Molony as Spike, the intellectual snob who has no time for any idea that does not accord with his own way of thinking and who is the occasional lover of the central character, Hilary. Spike’s real name is Spencer and the fact that he calls himself Spike is telling indeed. He fancies himself as a ladies man (really, he thinks that any woman would be glad to have sex with him, even a lesbian in a happy relationship) and appears in various stages of unlikely undress. Molony is excellent at being the bad boy, and he also captures perfectly the cynical side of an academic/ thinker who despises those with whom he disagrees but with whom he is not above having sex. He embodies the notion of Egoism.

The every reliable Anthony Calf makes easy work of the fantastically rich Jerry, whose mind works at a hundred miles an hour and who keeps his options open about whatever philosophical theory or behavioural science notion he chooses to be interested in. His interest comes from the effect science has on his money-making hedge-fund schemes and Calf excels at showing Jerry’s almost one-track money-making mind. He shows flashes of altruism, but is essentially another supreme Egoist.

There is a third committed Egoist: the arrogant Amal, whose sense of superiority is Grand Canyonesque until Jerry effectively puts him on the naughty step for two years. Parth Thakerar brings Amal to sprightly life. At the start of the play he shares views and an outlook that mirrors Spike’s, but after time on Jerry’s naughty step he might be reconsidering his views as this speech indicates:

“I don’t trade. I don’t pitch. I work on the computer models which are supposed to manage risk. So long as the market is correcting itself, the models look as if they are working, In theory, the market is a stream of rational acts by self-interested people; so risk ought to be computable, and the models can be proved mathematically to crash about once in the lifetime of the universe. But every now and then, the market’s behaviour becomes irrational, as though its gone mad, or fallen in love. It doesn’t compute. It’s only computers compute. So I’m thinking about that.”

Given that when the play commences, Amal thinks computers can do anything – and more- than a brain, this is quite a change of position. Thakerar shows Amal’s journey from rigidly certain academic viewpoint, through personal humiliation, to flexible, adaptable thinker. Of the three central egoists, Amal, somewhat incredibly, turns out to be the warmest. It’s a credit to Thakerar that he could pull that off.

There are a series of other roles with varying degrees of importance: Jonathan Coy’s dirty-old-man Head of Department, Leo, who doesn’t accept the Spike/Amal view of Science; Vera Chok’s so-desperate-to-please-she-will-do-bad-things Bo, whose role in the plot is completely unbelievable; and the unlikely lesbian couple of Rosie Hilal’s Julia and Lucy Robinson’s Ursula. One suspects that these characters are present as more than plot points; they seem to be there as persons with whom the audience can identify and about whom they can care or relate. But the playing does not have that result.

Really, none of these characters is sufficiently likeable to make one care about what happens. Some of them have ludicrous/obvious storylines which are at best, trite, and, at worst, laughable. Worst of all, the way these characters interact with Hilary lessens her as a character. She is the representation of Altruism – she needs all the help she can get to navigate the pool of scientific sharks in which she swims. But the way the plot unravels she is given none; rather, she is made to look fundamentally flawed by, at least, Leo, Jerry and Bo

The play can’t work without the character of Hilary being the result of a transcendent performance. Much is required of the actor playing Hilary – difficult dialogue, difficult situations, and difficult emotions – and she has to navigate unlikely plot developments and a chasm of predictable sentimentality when the cards fall into place (which, unless you are asleep, happens very early on in the play). It’s a monumental task this playing Hilary in The Hard Problem business.

Olivia Vinall manages the task, but really only just. Hilary calls for an inner power, an incandescence of spirit and a vocal dexterity that Vinall does not have. She is no Emma Fielding or Carey Mulligan – to name but two actresses who might once have done this role proper justice. Vinall works hard and you can’t fault her commitment to the task at hand, but she is not equal to the huge challenge Stoppard has posed and she is not, in any way, aided by Hytner’s staging or the other casting.

In the end, though, the greatest share of responsibility lies with Stoppard. The Hard Problem just does not hang together well enough as a piece of theatre. There is not sufficient plot and character, not enough warmth, to make the tennis game of scientific principles, theories and conundrums worth watching. Unlike in Arcadia, there are no surprises, no beguiling characters , no intriguing personal interactions. Rather, The Hard Problem is populated with unpleasant and unlikeable people spouting difficult scientific jargon in a sea of sentimental and predictable banality. There are a handful of good jokes but a handful is insufficient. The detailed notes in the programme provided more dramatic interest than about 100 minutes of stage time.

At the end of the play, one felt like the Baker’s Wife after her encounter with Cinderella’s Prince in the second Act of Into The Woods: to quote, “Is that all?”