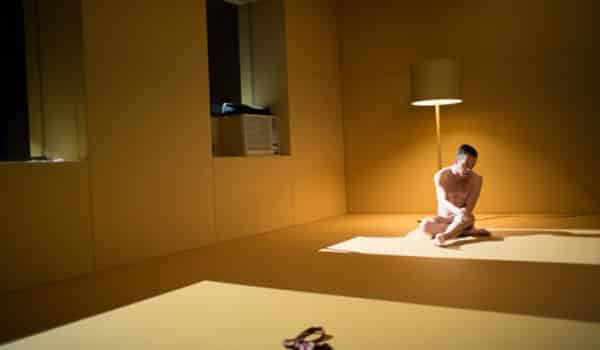 “You told me once that talking was just a peculiar form of breathing. It was like posh breathing for humans, you said. And that singing was something deeper and richer and stranger and more incredible. You told me that scientists had started to think, when they studied the vocal cords of the earliest human beings, that hunter-gatherers sung before they spoke. They didn’t live so close together. There weren’t so many of them. They needed to communicate over long distances.

If talking is a peculiar form of breathing, then the talking in Song From Far Away (a new work from Simon Stephens and Mark Eitzel now playing at the Young Vic) makes peculiarity an artform. It’s not just peculiar talking, it’s very alienating peculiar talking.

Usually, theatre seeks to involve the audience in something – a point of view, a way of life, a perception. Something. Song From Far Away, at least as directed by Ivo van Hove, seems to do everything it possibly can to keep the audience at bay, separate from the world of the performance, watching rather than experiencing.

While this approach requires a fastidious determination and an unrelenting nonchalance from the star, Eelco Smits, and, therefore, is challenging and exacting for him, the result here is unrelentingly grim and frustrating for the audience. It is impossible to care for the central character, so clinical is the presentation, so aloof is the interpretation, so cold is the emotional through-line.

This is not to say that there is anything wrong with Smits’ performance – there is not, he is excellent – but the choice to have Smits perform in that style is confounding. It does, however, fit seamlessly with Jan Versweyveld’ set design which is as featureless, unwelcoming and cold as Smits’ Willem.

Willem lives in New York in a fabulous apartment. He has his own life, fuelled by his enormous salary and A-list entourage. His family is long behind him, far away in Amsterdam. Then he gets a phone call from home: his brother, Pauli, has died. It’s an inconvenience, disrupting Willem’s plans. But home he goes for the funeral. 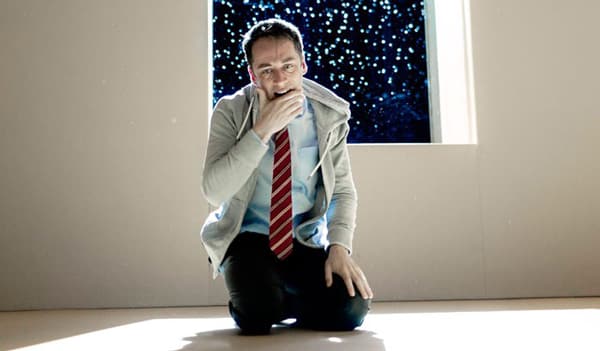 He can’t face staying with his family, so he takes a room at the Lloyd Hotel (paid for by the Bank for whom he works) and faces the days that follow in that room. For reasons which never seem either clear or plausible, Willem elects to write his dead brother a letter each day and those letters form the the text of Stephens’ play.

Versweyveld’s set, which seems a true first cousin to the set he designed for van Hove’s recent prediction of Antigone, is modern, elegant and viciously impersonal and exclusionary. The New York apartment is sterile and exclusionary; the Hotel suite occupies the same space in the same off-putting way. The sparse, icy set underlines the notion that Willem is a prisoner in his own life. It looks good and Versweyveld’s lighting exceptionally brings shifting shadow into play, almost as another character.

The best moment in the production occurs when snow falls outside Willem’s cell. The snow is magical and brings a surprising warmth to the world outside, the world where Willem rarely interacts on a personal level. As the snowflakes dance outside, Willem’s self-imposed isolation is perfectly encapsulated; real life occurs outside Willem’s bubble/cell.

There is no doubt that Stephens’ script raises interesting issues and is often quite beautiful. The tone is elegiac, reflective, philosophical; there are intricate matters addressed and while many of them are not especially insightful, they are presented in a clever way. But the actual words used are not that skilfully employed, and whole sections of the writing are as plain as the proverbial pikestaff.

But it is far from clear that van Hove has found the best way to present Stephens’ vision. With no one feeling for or caring about Willem, the experience of being in the audience is trying and unfeasibly dull. It is difficult to believe that seeing this production provides an audience with any appreciation or understanding above that which would be discerned from reading the letters Willem wrote to Pauli.

One of the techniques van Hove utilises to mark out this production as a talking point involves Smits disrobing and spending an inordinate part of the play stark naked. Apart from the visual hammer of Willem being both stark and naked at once, stripping himself bare metaphorically and literally while he deals with the thoughts and emotions that surface following Pauli’s death, the nudity seems both pointless and unnecessary. If there is a clever point, it is entirely lost.

Stephens shares writing credits for Song From Far Away with Mark Eitzel who provides the lyrics and music for a haunting, quite beautiful song, pieces of which punctuate the action. The song has a repeat motif: Go where the love is, Where the love is go. In its own way, that repeat motif provides the key to Willem. You can’t help but feel that if the character had simply paid attention to the song, no one would have had to endure the 80 minute self-flagellation.

When it is over, the clearest notion is that without the involvement of van Hove, this play would be unlikely to be produced – anywhere – in this form. Although there may only be one speaker, other actors could easily be involved in the telling of this tale, and perhaps should be.

Stephens actually sums up the experience of seeing this production in one of the passages from one of Willem’s letters:

“You told me it felt like you were on this miserable train journey where you had to work hard and endure misery because when you got to where the train was going then everything would make sense. But what if there was no end? What if all there was no end? What if all there was was this journey and everybody was on this journey and everybody thought they were heading towards something and they were enduring misery and nonsense and bullshit and horror now because in the end they’ll be glad they put up with it all. But what if the train just kept going forever and ever?”

Van Hove’s production deliberately has no end, but any audience member who saw it and felt he or she was enduring misery and nonsense and bullshit and horror would not have been alone.