More than 400 shows have been announced for next year’s Vault Festival in London – more than ever before. 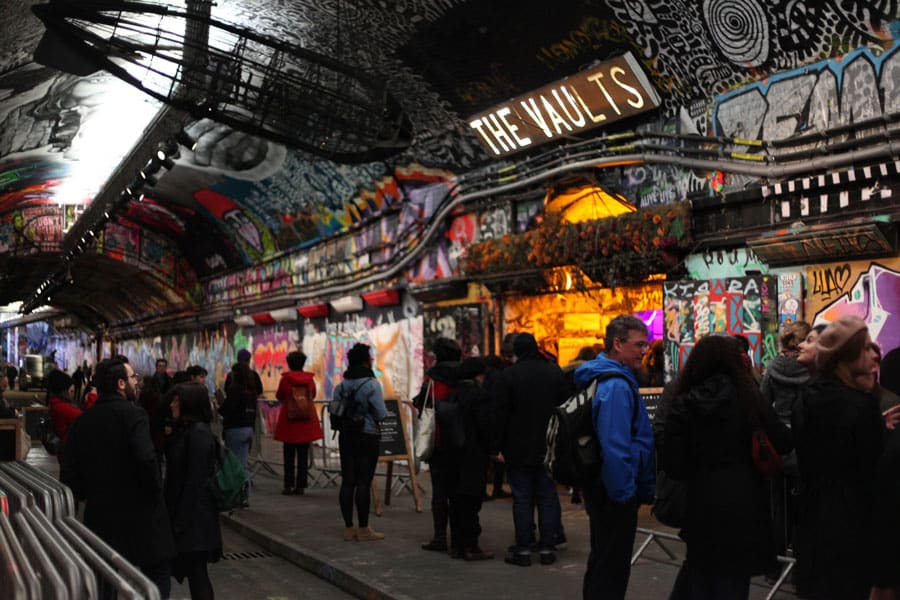 After over 300 shows last year, it is now in its seventh year, running from 23 January to 27 March 2019, which confirms it as one of the largest curated arts festivals in the world.

It will feature new writing for theatre as well as comedy, immersive experiences, cabaret, live performance and late-night parties. The programme features shows from more than 2,000 artists, with 53% of work being female-led and 25% of work coming from LGBTQIA+ artists.

In 2019, performances will take place across Waterloo with multiple spaces located underground in the festival’s central hub, The Vaults. Other venues include community performance space The Network Theatre, upstairs at The Horse & Stables pub, Granby Place, the Travelling Through Bookshop and Unit 9 on Leake Street plus other pop-up venues such as shipping containers, caravans and escape rooms.

Highlights of the festival include immersive folk opera Counting Sheep which returns to the UK for the first time since its award-winning run at Edinburgh Festival Fringe in 2016. A deeply personal retelling of the revolution in Ukraine, the production is an explosive stage experience set to the sounds of Canada’s guerrilla-folk party-punk band, The Lemon Bucket Orkestra, with interactive staging that invites audience members to be part of the revolution.

Also running for a full eight weeks, the makers of Counting Sheep present the London premiere of Balaklava Blues, an ethno-bass live set, coupled with archive footage, iconic Soviet cartoons, and the polyphonic blues of the Ukrainian plains.

London’s New Diorama Theatre has joined forces with Vault Festival to showcase some of the UK’s most exciting ensemble work. Staging some of their recent Edinburgh hits, the NDT/Vault Festival Takeover includes A Super Happy Story (About Feeling Super Sad), a hilarious but gut-wrenching story about depression from Olivier award-winning playwright Jon Brittain.

It also features Kill the Beast’s Director’s Cut, a comedy staged on the set of a 1970s horror movie, and Edinburgh Fringe sell-out show Queens of Sheba – a funny, poetic and unflinching look at “misogynoir”. The NDT/Vault Festival Takeover season culminates with The Faction reviving their electrifying production of The Talented Mr Ripley, breathing new life into Patricia Highsmith’s psychological thriller.

Vault Festival will host two award-winning shows from this year’s Edinburgh Fringe. The Myth of the Singular Moment, which won the Summerhall Award, is scored by a contemporary folk soundtrack and tells of the choices we make and those we don’t as multiple realities coincide and diverge. Pleasance Award winner Ladykiller is a blood-soaked jet-black comedy offering the feminist case for female psychopaths.

More macabre work can be found in The Vaults’ underground tunnels such as thriller Kompromat, which follows the final hours of the GCHQ agent murdered and folded into a sports bag, based on the real-life 2010 case.

]Pufferfish is based on the real and astonishing story of Jeffrey Dahmer who took the lives of 17 young men in the 1980s. It digs through the homophobia of the initial reporting of the case and attempts to uncover the links between fear and desire, beauty and horror.

Other theatrical highlights include Byron Lane’s hilarious surreal comedy Tilda Swinton Answers an Ad on Craigslist – another hit from this year’s Edinburgh Fringe – which features Instagram and Buffy the Vampire Slayer star Tom Lenk as Tilda Swinton coming to the rescue of a depressed gay man.

Physical theatre ensemble The PappyShow present a cycle of plays including: Boys, a celebration of manhood with the things about boys you never get to see; Girls which explores the complex yet joyous stories of women of all ages; and Care, a touching tribute to the NHS.

Orlando from Lucy Roslyn and Josh Roche is the story of Virginia Woolf’s character through the 1960s, the Aids crisis and the shooting at the Pulse nightclub in Orlando, interrogating society’s insistence on boxing up identities.

Irish company Malaprop’s Jericho considers the world we live in and explores wrestling, journalism and confusing entertainment and politics.

Katie & Pip is about the relationship between Katie, a Type 1 diabetic teenager, and Pip, her border collie, trained to save her life on a daily basis. Making an invisible disability visible, it celebrates living life to the full, with help from an actual dog in performance.

Following the recent trend of reclaiming “herstory”, Vault Festival sees several new shows telling the stories of women marginalised by history. They include 10, telling the history of Britain since Boudicca through 10 influential women while Fat Rascal’s Galvanise sees three young women rediscover forgotten female leaders from across the world.

New musical The Limit puts the self-taught mathematician Sophie Germain centre-stage exploring how she disguised herself as a man to submit work. Lola is the rich feminist unpicking of Vladimir Nabokov’s Lolita which gives the eponymous character a voice to express her justifiable rage and discuss self-harm, stalking and extremely large breasts.

Family shows include Faceplant Theatre’s One Duck Down, an eco-friendly family comedy inspired by the 7,000 rubber ducks that spilled into the ocean in 1992. Winner of best family show at the 2018 Vault Festival, it is a musical production about oceans and plastic pollution that would make David Attenborough proud.

Also promoting environmental responsibility with a twinkle in their eye, Blue Planet III is a nature documentary from two interns determined to fight rising sea levels and pollution to film the third series of Blue Planet within a flooded BBC.

Encouraging inclusivity and creativity, Spun Glass Theatre’s Princess Charming is a topical exploration of gender identity for children aged seven to 11. This hilarious play enables them to gain a deeper understanding of their own identities and, in doing so, break free of gender stereotypes.

Singing, dancing and teaching Cantonese vocabulary, Boh Boh Finds Home is the interactive adventure and debut show from Little Bean Theatre which allows families to travel through the galaxy together.

How to Date a Magical Creature features a multi-award-winning Bafta and Olivier-winning cast who create a new improvised chat show every night as the most famous fantastical beasties reveal their most intimate secrets and gossip.

Returning for its second year, the Vault Comedy Festival offers a chance to catch works in progress from leading comedians such as James Acaster, Phil Wang and Desiree Burch as well as debut hours from exciting up-and-coming acts such as Helen Bauer, Chloe Petts and Kayla Macquarie.

Elf Lyons will channel her inner Elton John to perform Love Songs to Guinea Pigs. With songs about, for and to guinea pigs, Lyons explores love and affection in her most personal show to date.

Catherine Bohart presents new work after her successful debut Immaculate, while Max and Ivan try things with two mics and a projector and Tom Parry celebrates life, love and losing your tie.

Comedy shows transferring from the Edinburgh Fringe include William Andrews’s Willy, embracing the Willy he always was, telling remarkable stories with a beguiling blend of daft creativity and ingenuity.

Kicking the weekends off, the festival’s series of Lates promises “nights of adventure”. On Saturday 2 February, Pecs Drag King Collective will be giving Vault Festival the chance to be King for a Night. Visit the Mansformation Station to get ready for hot cabaret performances, sweaty dancing, 90s RnB and all your favourite drag kings.

Other highlights include a Valentine’s Special Eat Your Heart Out! from Shotgun Carousel, the critically acclaimed team behind Divine Proportions. From raunch to romance, it will be one huge celebration of all flavours of feminist love with a multi-room extravaganza of bands, DJs, cabaret and even a sham wedding chapel.

All ticket transactions will provide audiences with the chance to donate to Help Refugees, providing humanitarian aid to displaced people around the world. The festival is also supporting Child.org which will host a stage at The Horse & Stables and receive a percentage of ticket sales to support its Team Mum campaign, helping to fund pregnancy services in rural Kenya that offer health information and medical support for new mothers.

Vault Festival will continue its partnership with WeAreWaterloo, supporting the local community with a range of initiatives aimed at residents and under-25s. The festival is also expanding its engagement scheme with Surge, a new pilot programme of cross-arts projects, working with schools in the area to provide workshops and outreach performances.

Supported by theatre publisher and performing rights agent Nick Hern Books, the Vault Festival New Writers Programme will offer an eight-week practical writing course for prospective writers of any age, enabling them to develop a piece of writing for the stage, culminating in a public showcase in the final week of the Festival.

In collaboration with Meantime Brewing, the festival’s bars will be joined by a specially designed and purpose-built new craft beer bar. Local culinary masters PopCo will serve up an EU-inspired food menu.

The festival is investing in 12,000 reusable cups to significantly reduce single-use waste, alongside a switchover to paperless tickets, a ban on plastic straws, and a guarantee that all food and beverage packaging is biodegradable or recyclable.

Vault Festival will offer up to 10,000 two-for-one tickets through its official app partner, Stagedoor. The full programme and tickets for all shows are available via the link below.