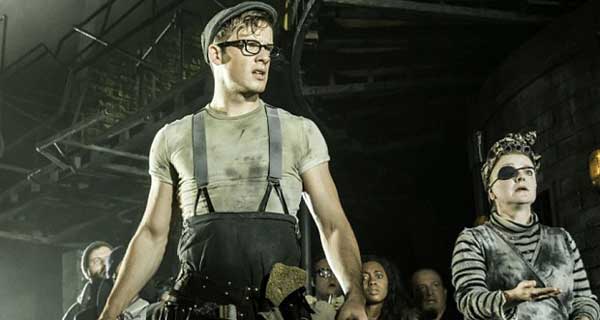 “What kind of a musical is this??!” cries Little Sally
The good kind.

Susannah Clapp (for the Guardian) described Miss Saigon as “a show that flaunts the notion of liberal sympathies, while cruising on commerce.” This got me thinking, Miss Saigon aside, about how this all too apparent paradox operates throughout theatre – bubbling at the very core of it, and of all art. Theatre, with its passionate, imaginative, liberal-minded practitioners with something important to say, is monopolised by those who can afford to produce the work in the first place, and then experienced by those who can afford the ticket prices. Theatre is reserved for the wealthy, particularly in the west end.

But is the door permanently shut? Perhaps not.

For me, there are two types of musical: commercial ones and less commercial ones. Most of the time, you know what to expect from a west end show – something grand, sparkly, and feel-good, a spectacle that demonstrates where each of your pound coins has been spent. But then, just occasionally, something we don’t recognise clambers to the surface, something fresh and edgy with something important to say. Is there space for shows like this to breathe? Can a new musical make hay without celebrity leads, without (god forbid) branded titles? “If they are good,” I hear you cry. But glance back over recent west end history; can a ‘less commercial’ show really expect to succeed in the west end simply by being “good”? I hope so. Of course, we want these shows to succeed, to be received by full houses eight times a week, for the actors to keep their jobs, because, after all, brilliant work deserves to see a profit. But even then (and here’s the snag) there’s the risk that these shows, in outgrowing themselves, begin to emulate the systems they set out to criticise, ultimately compromising on integrity in order to sell more tickets. What is the cost of making money from art?

Very often wonderful musicals like this emerge from the fringe, from off west end – with its cheaper tickets, younger audiences and intimate venues that beautifully contain and enhance the show’s subtlety. These sell-out fringe hits might prompt people to cry, “That was so good, it deserves to transfer to the west end!” But since when was it that simple? Since when was this industry a meritocratic one? There are an entirely different set of requirements for the west end because there is an entirely different audience, for whom some shows just don’t fit, regardless of how “good” they are. And then, when that ‘less commercial,’ wonderful show fails to fill a larger venue, it is thought of as a failure. A flop. A little unfair, don’t you think? 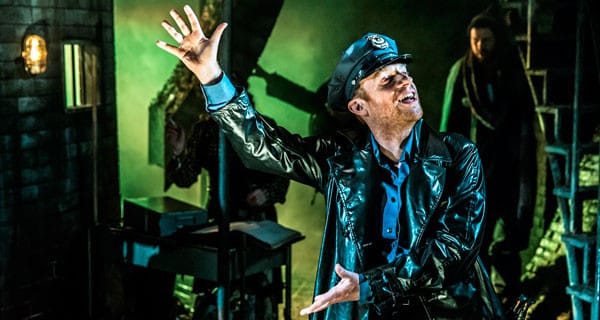 The critics don’t get much of a say over it either: One thing we learned from the premature closure of I Can’t Sing is that good reviews aren’t enough to guarantee a west end hit. Impressed reviewers described the show as “wildly eccentric” and “wonderfully funny,” but Harry Hill’s X- factor Musical still couldn’t generate an audience – certainly not one expansive enough to sustain the crowd swallowing Palladium. Sondheim’s Merrily We Roll Along was awarded more five star reviews than any other production in west end history but, even then, the ticket sales dried up. The show closed after twelve weeks; just more evidence that merit and sustainability rarely correlate.

It’s not all bad though. West end audiences are evolving, little by little. You need only look at the success of The Book of Mormon or Once (sadly now closing) to see that. New shows bring with them new audiences and increase our willingness to accept musical theatre as a form capable of tackling issues. (Yes, really! Even Musical Theatre!) BUT the transformation is far from complete. So, when a ‘less commercial’ musical prospers on the fringe before moving into town, I worry.

But I was wrong to worry about Mark Hollmann & Greg Kotis’ Urinetown.

Urinetown sold out at the 312 capacity, perfectly formed St James theatre for nine weeks earlier in 2014. Everything about it – the music, cast, design – knocked my proverbial socks off (even if its name did make me shudder).

So I had my reservations when I heard about the transfer…

“Is Urinetown, clever and funny and fresh as it is, a candidate for the West End?” I thought. What compromises will have to be made? What details will be lost? “It will be recast with celebrities, no doubt,” I cynically grumbled to myself. I expected it to be diluted, like gin with too much tonic. 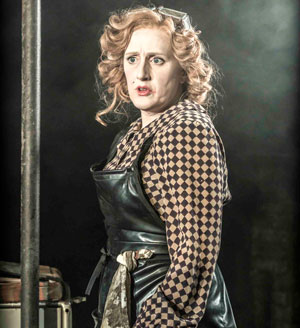 But (and I rarely say this so enjoy it) I couldn’t have been more wrong. In the 775 capacity Apollo Theatre, Urinetown is equally concentrated and equally impacting. The faces of those alongside me – their elation and surprise – could have been bottled and sold along with the programmes, ice creams and T-Shirts front of house. The performers command control over all three tiers of audience. They are spontaneous and cheeky – toying with us, infecting us with laughter (as well as the desperate need to pee). We are splattered by Jonathan Slinger’s articulation, held by his every inhale and entranced by his slightest gesture. The metatheatricality drags the performances outwards and the audience in. Urinetown’s overt parodying and dissection of the musical theatre form reflects the show’s simultaneous parodying and dissection of society – both the dystopian future in which the scene is set and our, not too dissimilar present day. This mocking of the form feels all the more pointed here, in the heart of theatre land and only a few doors down from the Queen’s Theatre, home to Les Miserables with its rebellion and revolve played and incorporated in complete earnest. In short, the atmosphere in the Apollo auditorium is wild, and will continue to be so for as long as the show has an audience.

In fact, having seen the way in which the show fits this new theatre, I feel naive for not having realised that this transfer was the plan all along. Urinetown was directed and budgeted and designed with this journey in mind from the start; the St James run to generate interest and ‘a buzz.’ Of course it was! Pretty clever when you think about it.

Granted, the name Urinetown raises eyebrows. The show might not be to everyone’s tastes; when push comes to shove (so to speak), it is about the need to urinate. It isn’t the obvious choice for the bi-annual family trip to the theatre, or a conventional birthday treat (NB: I’d very much like Urinetown tickets for my birthday), but it is the musical that people, from near or far, HAVE to take a risk on this year.

What is Urinetown? It is an intelligent, unique, funny, political, naughty, self-flagellating musical about sustainability that, like with any production, will need an audience to sustain it. There’s a disconcerting irony to the cash-drop in Act One that leaves the audience with money in their laps and at their feet; I only hope there are enough of us to return the offering. In this, frankly, horrific time for show closures, it might not be long before funds are as sparse as the water in Urinetown.

Could Urinetown signal the start of a theatrical revolution, where the unbranded or little known can prosper on merit alone? Could it be the show to finally redefine musical theatre? Maybe none of that matters to you but, either way, book your tickets now because Urinetown is the most enjoyable musical in the west end, bar none.