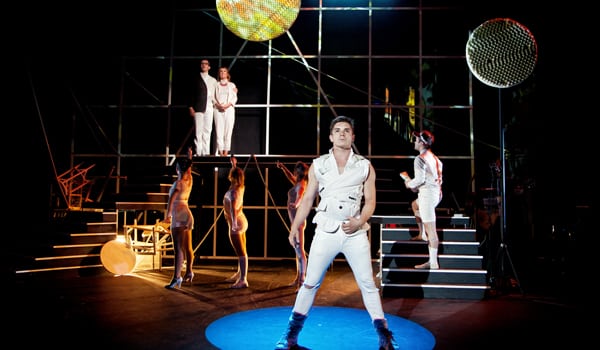 He is dressed all in white. The personification of innocence and beauty. He cannot see, hear, or speak. He is very young. Traumatised. Although he lives with his mother and father, he is alone in a dark, silent, uncertain world. His uncle is looking after him tonight as his parents, his mother reluctantly, have gone out. Uncle Ernie brings hard candy, pink striped rock. Uncle Ernie touches him. Fiddles with him. Interferes with him. Destroys part of his innocence.

The boy cries, deeply, silently. He is not sure what has happened really, but it was not good. The shame and guilt radiates from him, breaking him asunder as if someone had snatched his soul and dipped it in tar. He rocks and shudders, an oasis of incomprehension and pain. He must find a way to escape.

His mother tries to have him cured. Doctors can’t assist. The problem, they say, is inside him. The mother is shattered. Her blind, deaf and dumb son sure plays a mean pinball, but he can’t have a normal life. He just gazes into the mirror which has entranced him since that night…that night when his father killed someone. He is fixated with the mirror. She is jealous of the attention he gives it, angry that he does not gaze at her the way he gazes at the mirror. Suddenly, she smashes it.

Then, he realises he can hear her whimper, see her ravaged features, touch her. He is free of his silent prison. Finally, he can see the world, hear its sounds, touch its many wonders. He is overwhelmed by the kaleidoscopic vista, the endless possibilities. He licks his arm, tastes himself. He is free, alive, full of the rapturous pleasure of the innocent about to explore the world.

It as as breath-takingly beautiful a moment of theatrical genius as one can imagine. 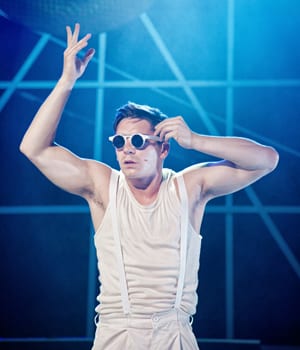 This is Tommy, a piece which came to life as a concept album for The Who in 1969 and then morphed into a film in 1975 and, finally, became a stage musical in 1992. Now revived by Michael Strassen, with musical direction by Kevin Oliver-Jones and inspired choreography from Mark Smith, Tommy is now playing at the Greenwich Theatre. Revived is not really the correct word: this is an intense, revelatory, and splendid reimagining of a slice of musical history.

The concept album was originally billed as a “rock opera”, the very first to make that claim, but the present production seems much more than that. Smith’s remarkable choreography, the intricate way that fluid movement is critical to the story-telling, and the several-perspectives-all-at-once approach to the visual aspect of the narrative -these elements make this a spellbinding theatrical treat.

It’s more ballet than opera, really, because there is so much communication through movement, touch and dance. It is searingly intimate for the most part, though the themes of betrayal, complicity and forgiveness are universal and there is a grandness to some of Tommy’s life. Perhaps Rock Bopera might be a better appellation – something that is a fusion of some of the aspects of opera and ballet, but with a rock sensibility which is profound.

Regardless of how it is characterised, Strassen’s production of Tommy is a genuine triumph, practically perfect in every way. From the first note, it grabs you by the throat, demands that attention be paid, and does not relent in that until Tommy spins the oversized pinball in his hands and a blackout signals the show has ended. Intervals are rarely resented these days, but I freely confess to resenting the interval here.

While the overture is played, Smith engages the cast in a clever telling of the backstory. There are no words, but the muscular and sexually charged dynamic, which will be the physical language of the performance, sets the scene and acclimatises the audience for what lies ahead. So completely absorbing is Smith’s movement and dance that, when it comes, the first sung word is something of a shock.

In the programme, Strassen says:

“I wanted to stage a world where we see the inner workings of Tommy and not just a harrowing stare. Choreographer Mark Smith was a vital choice in my vision.”

Smith achieves Strassen’s aim – viscerally, intuitively, and gracefully. You don’t realise it at the start, but eventually the penny drops. You are watching Tommy’s version of events, from his point of view, raw, unfiltered, grim and unforgiving. As a way of harnessing the potential of this material, it is difficult to think of a more effective and triumphant approach.

Nick Corrall’s design feeds into this too. The basic colour for everyone is white. Snatches of darker colours, pieces or parts of clothing 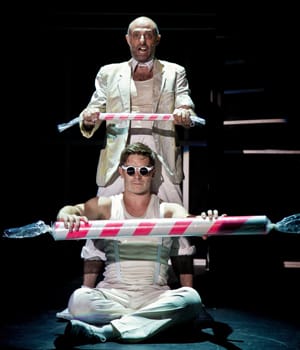 are added or superimposed to create specific characters. The clash of colour seems to be an intrusion in the otherwise peaceful white world. Tommy is blind – but that doesn’t mean he sees darkness, a black void. He could, as easily, see white light, shadows moving amongst the glare.

The stage features an abstract evocation of the key objects or events in Tommy’s life; the mirror appears in several guises, as do the pinballs of the machines he comes to dominate. Chairs and other detritus clutter the space, or are moved around as necessary. Doorways can be made of rope; recognisable objects are used to evoke something, an image, a concept: microphone cords are used as restraints at one key point, symbolising both the highs and lows of fame.

Of course, the cleverness of the conceit and the execution here would count for nothing if the casting was flawed. Happily, it is spot on in every way. Ashley Birchall is inspired casting as Tommy. The bulk of the show rests on his shoulders, and rests easily.

The score is incredibly demanding, written as it was, for the unique, astonishing instrument with which Roger Daltry was blessed. Birchall might not have the rough, bruised edges of Daltry’s voice, but he has a white-hot voice which is thrilling and broad at the top, energised and supported throughout, and capable of expressing intensely felt emotion while belting out pure, ringing notes that connect and dazzle.

He is a superb actor too, constantly in the moment and working – he is not afraid to take time, sing softly, underplay. He uses his considerable skills to show us Tommy’s world, his life, his boundaries. He brilliantly specifies the relationship Tommy has with all those close to him: mother, father, Uncle, Cousin, Acid Queen. Although his eyes may be blank, or hidden behind sunglasses, he deftly conveys emotions and thought in other ways. He is, frankly, astonishing.

John Barr gives Birchall a run for his money. In a malignant tour-de-force, Barr scrapes out the essence of Tommy’s paedophile Uncle Ernie and brings him vividly, desperately to life. Like some horrific blend of Fagin, Jimmy Savile and Adrian Edmondson’s Viv (The Young Ones), Barr, astonishingly, does the very thing Uncle Ernie would do – charms you despite his repulsive behaviour.

There is no cover-up here: Barr’s delivery of “Fiddle About” is horrific given the lust on display, but something about his precise, perfectly judged delivery hits the mark. He shows you how Jimmy Savile got away with it. His cosy green-hatted dance routine with Tommy’s cousin is toe-curling, and it is a credit to Barr’s skill that when Tommy is released from his prison of solitude, it does not seem odd that Tommy does not lash out at him. If this show were playing on a West End stage, you would give Barr the Olivier for Best Supporting Actor in a Musical now.

James Sinclair and Miranda Wildford are splendid as Tommy’s parents, their despair about Tommy’s condition tempered by their own guilt, lust and culpability. Both have excellent voices and make easy work of the difficult high-set score. Wildford is especially good in her red dress in the scene where everything changes for Tommy.

There is strong support too from Giovanni Spano (Tommy’s vile bully-boy cousin), Carly Burns (whose take on the iconic Acid Queen is notable for its restraint), Danny Becker (an extraordinary voice of real power), Carrie Sutton (whose doomed Sally is pivotal) and Scott Sutcliffe who, in a variety of roles, provides strong backup and brilliantly observed detail – his reaction to Uncle Ernie’s appalling loose-fingered Santa Claus is, for instance, delicious.

The entire cast, including Alice Mogg, do terrific work with Smith’s choreography and there is a bruised, sexual energy about everything that happens which reflects the entire narrative, not just because of Tommy’s journey, but also that of his parents and Uncle Ernie. The sense of the Fifties and Sixties is overwhelming.

As a group, the cast master the challenges of the choreography. Group routines are tight, precise, expertly drilled and utterly synchronised. Individual work is exemplary, and where people are meant to be in the background, they are; but when they are in the Sun, they revel in the chance. The pinball playing is represented brilliantly, and the frayed, exhausted, spent haze at the concussion of the narrative is as important, as telling as the taut energy which commences proceedings.

David Howe’s lighting design is an integral part of the fabric of the show. Altered light states reflect mood and experience and add to the frisson created by the cast and choreography. His Moon is magical. The expert four-piece band, led by Kevin Oliver Jones, produce beautifully judged acoustic support, fiery, electrifying, and galvanising. Musically, this is sheer delight. “Pinball Wizard”, “I’m Free” and “We’re Gonna Take It” are overwhelming.

This is an exceptional reimagining of a work rarely performed on stage. Vocally, dramatically and artistically it is an unqualified triumph. Birchall is a rising star, Barr an established one. Smith is a genius and Strassen’s vision here is utterly exceptional. Whatever you call this Tommy, Rock Opera, Musical or Rock Bopera, it is magnificent in an unqualified way.

Tommy runs at the Greenwich Theatre until 23 August 2015