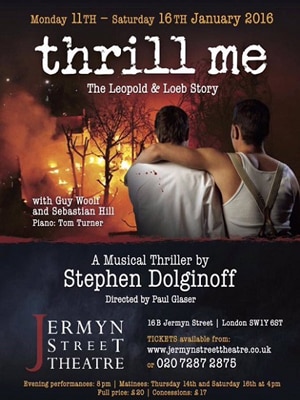 Hannah Arendi said that evil is banal but it turns out that it’s tuneful as well. A grisly child murder may not seem like a lucrative central conceit for a musical. However, Stephen Dolginoff’s Thrill Me takes on the true story of a pair of ‘thrill killers’ who shocked America.

The wealthy killers, Richard Loeb and Nathan Leopold, start their criminal career with petty crimes that eventually escalate to the murder of a 12-year-old boy. Their relationship is a complex one, motivated partly by their sexual chemistry but also by their desire for power and influence each other and the outside world

This makes for a dark and unsettling production; boosted by a brooding piano score played beautifully by Tom Turner. The power dynamic between the characters is constantly changing, as it emerges that the seemingly vulnerable Nathan may have been pulling the strings all along.

The score and lyrics are haunting and sharp, with some powerful harmonies between the two cast members. Due to the fluidity of the production the songs often blend into one but Superior and Life Plus 99 Years made a particular impression, combining macabre dramatic tension with intense music.

Whilst Nathan’s motivations for taking part in the murder were fairly plainly spelt out, it was not entirely clear what was encouraging Richard to spearhead such a shocking plan. A few scenes showed his love of Nietzsche poisoning his mind (which is a detail supported by historical fact) but the transformation never felt fully convincing; you couldn’t help feeling there was a lot being left unspoken.

In addition, the external consequences of the pair’s homosexual relationship were never fully explored. Presumably a gay couple would have been seen as sensational or even immoral in 1920s America, however at no point do the characters contemplate how the community or police might react to the discovery.

The two leads were both superb in what must be a highly challenging production for any actor. Guy Woolf was initially lovestruck and vulnerable but developed into a more multi-layered character. Woolf has real stage magnetism and put in a compelling performance. Sebastian Hill’s American accent slipped once or twice but he was wickedly demonic as Richard, boasting a brooding and deep baritone voice that made the score come to life.

Paul Glaser’s direction was massively stripped back; the stage and lighting are both remarkably simple, adding to the rawness and intensity of the evening. The only distraction was a rather annoying smoke machine, which would hiss every few minutes for no particular reason. Kim Mackay’s costumes fit the period nicely and added to the sense of 1920s decadence.

If you’re able to get over the eyebrow raising subject matter, Thrill Me can offer one of the most unusual and visceral theatrical experiences around. Disturbing but oddly moving and entrancing, it offers a unique look into the nature of evil and crime. Worth a visit, if only for a story to tell!