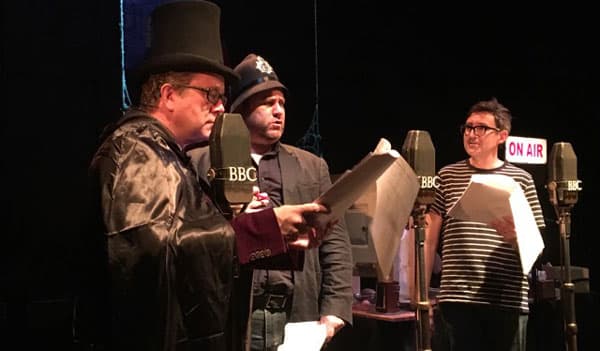 There’s a very prescient line towards the end of The Phantom Raspberry Blower. The narrator James Petherick claims that one of the policemen was ‘searching for a plot, although that may have been the case since 8pm’. It was funny (as many of the night’s jokes were), but as with most comedy, it was funnier because it was true.

The show has many redeeming qualities but the consistency of the jokes and storyline are not amongst them. Originally created by Spike Milligan and Ronnie Barker and then updated by Lee Moone, the jokes range from the sublime to the ridiculous and then to the simply dreadful.

The plot is simple (and absurd) – a Jack-The-Ripper style madman stalks Victorian London, murdering his victims through blowing a fatal raspberry. He picks off members of the Establishment one by one, pursued by a pair of hapless policeman (What is a hap? And why is it bad not to have one?). It is staged as an old style radio play, complete with on-stage sound effects and a BBC announcer in black tie.

Despite its wafer thin plot and repetitive humour, there’s an enjoyably British silliness to the show, with its latent innuendos, quickfire puns and larger than life characters. However, you can see why it was originally designed as a series of sketches; the show’s manic energy can only sustain itself for so long until you really feel it starting to sag. 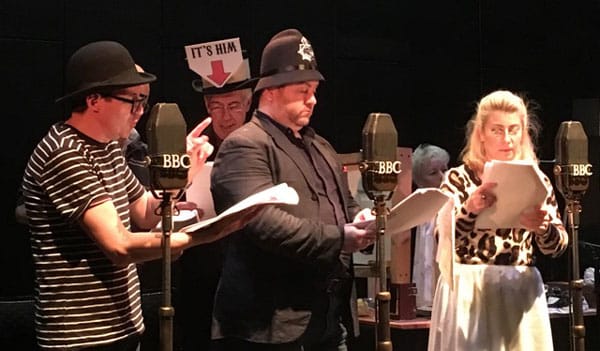 However, the cast gamely paper over these cracks with some wonderful performances. Steve Elias in particular stood out as Sergeant Bowles; I was surprised to see in his bio that he doesn’t have a comic background – his timing was superb and his joketelling second to none. His partner in crime David Boyle was also amusingly studious and pompous as Corner of the Yard, with some well delivered one-liners and ad-libs.

Jodie Jacobs, the only female cast member, played a wide range of characters, most of which allowed her to display her wonderful singing voice. There was also a very special guest appearance from Jon Culshaw as the Phantom; a nice touch that provided genuine gasps from the audience (before I get accused of posting spoilers, it will be a different celebrity every night!).

The quirky staging felt like it could have been planned by Milligan himself; audience members were regularly called upon to create sound effects or even come up on stage and play a part.

However, the star of the show was undoubtedly Jessica Bowles on the sound effects desk. Just like a radio play, all the effects were generated live, through a range of strangely deployed household objects. It was weirdly fascinating to watch and added to the night’s bizarre and chaotic feel, along with Benjamin Walden’s Pythonesque projections.

The Phantom Raspberry Blower will make you laugh and groan in equal measure. Whilst objectively the premise isn’t strong enough to sustain a two-hour production, the infectious enthusiasm of the cast makes for a fun, if frivolous, night.