The nearest thing I have seen to a perfect play, writes Alex Delaney. 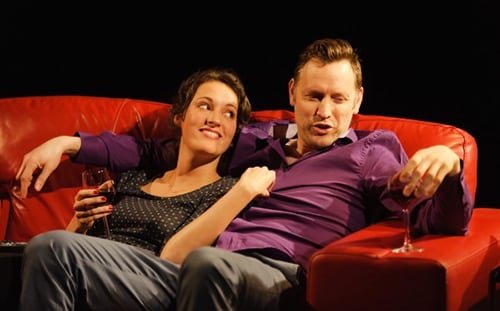 Vicky Jones’ award-winning first play, The One, explores the concept of romance in our present age. It is terrifyingly dark, indescribably hilarious, and holds its audience captive from the off. Exquisitely directed and faultlessly performed, it is the nearest thing I have seen to a perfect play. All of which makes it very hard to write a review that doesn’t read like a love letter.

‘The One’ takes place in the living room of a flat shared by Harry and Jo. The space is dominated by a large red sofa, which becomes both battlefield and boudoir as the play unfolds. Classical music swells, a starlit backdrop shimmers; our protagonists glide onto the stage and into a passionate embrace. It is every inch the fairy tale ending, just before ‘happily ever after’. This overblown sentimentality is abruptly and brilliantly undermined, however, as the loving clasp turns into porn-watching, Wotsit-eating, barely-engaged sex.

At the heart of Jones’ staggeringly well-written piece is the idea that we are now perhaps too cynical, too knowledgeable or too intelligent for love. Is anyone really naïve enough to believe in the concept of ‘the one’ anymore? And, if we can suspend disbelief long enough to look for it, how can we tell when we’ve found it? As we watch Harry and Jo struggle with these questions through the course of one sleepless drunken night, Jones’ dialogue – spoken with startling immediacy and joyous freedom by both Rufus Wright and Phoebe Waller-Bridge – reveals the Janus-like nature of this modern monogamy: cosy and claustrophobic, intimate and infuriating, vivifying and violent.

It is an exhilarating yet exhausting journey for the audience. Never allowed to relax, never able to guess how events will unfold, we, like Harry’s beleaguered and bedraggled friend Kerry, are only able to watch open-mouthed as these two lovers tease, torment and titillate each other, endlessly pushing buttons and boundaries. In the first half, these exchanges reach their peak in Kerry’s company as if the presence of any outside party invigorates a routine that the couple have got tired of re-enacting. As the play goes on, we also discover that the existence of a witness can act as safety net, and without their stabilising influence, the games may and do go too far. We, as the invisible spectators of the full pantheon of events, feel simultaneously excluded from the intimate entanglements of the duo, and guiltily implicated in their vicious consequences.

Waller-Bridge , Wright, and Lu Corfield all produce stunning performances: layered, specific and very very funny. It is only the former to whom Jones has dedicated the text, and deservedly so – her Jo is horrible and horrifying character but Waller-Bridge plays her with such brazen charm and breath-taking skill that we cannot help but be drawn to her, as inevitably as is Harry. Whatever your interpretation of the play’s final moments, and their implication for the central relationship, one thing is certain: Jones and Waller-Bridge are a match made in heaven.
Runs until 30th March 2014.
More info