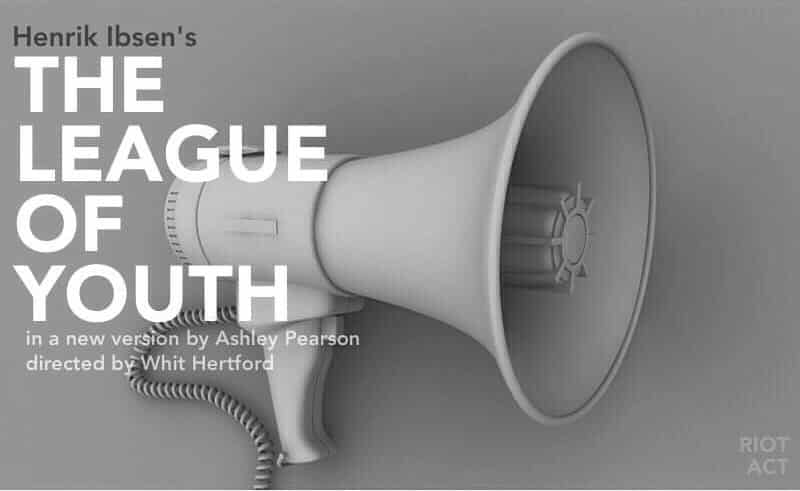 At last! At last! At last! Whit Hertford’s restlessly inventive and brilliant troupe, Riot Act, launch Henrik Ibsen’s little known and even less seen (just three productions in this country since 1877…) The League of Youth, presented through the good offices of the increasingly important Theatre N16 Balham at The Bedford.

For those of us who – for as long as anyone can remember – have believed that Ibsen’s dramas must always include ladies in floor-length dresses (preferably black), with long sleeves and high necks, who perambulate in drawing rooms where there is always a plentiful supply of macaroons, and whose genteel air is regularly wafted by an unseen chamber ensemble playing something delicately tentative… for those of us who have despaired, in other words, of ever seeing anything in his plays that we could identify with, those days, I can now announce, are past.

Whit has engaged the brilliant craft and artistry of writer Ashley Pearson to transform this tale of local politics into a modern fable of the office age. The 15 characters of the play have been drawn together to form a core of 9, making for a more compressed and lucid experience. The five acts of the narrative flow one into another without a break over 75 minutes: each is structured differently, ranging between wild parties and the cold, hard machinations of boardroom power struggles. There’s drinking, singing, semi-nudity, machismo, violence, a speed fuck that would not look out of place in Enron. Above all, the stage action is so energised that it invests Ibsen’s ideas with the kind of kinesthetic power and excitement that they rarely attain in the polite 19th century bourgeois interiors he customarily gets.

In order to make this vision come to life, Whit has hand-picked this company, and got the best. Martin South is the CEO of Norway, Inc., and a crumbling patrician figure he cuts, his power being torn away from him by the competing interests of his rapacious sister Thora, Cheska Hill-Wood (on delicious form!), board member Patricia, Helen Bang (always dressed to kill), and the predatory workers’ representative (and consummate corporate lothario) Stensgard, #NiallBishop; around this cyclone of self-seeking and back-biting trail the financial director Fieldbo, Sean Earl McPherson (who gets the last magnificent words, which could be Ibsen himself speaking directly to us, and are certainly not in the original script), office manager Dana, Sukh Kaur Ojla, initially feeble ex-druggie hanger-on Erik, Jak Ford-Lane, pushy livewire whose fortunes are transformed by a stunning lottery win Monsen, Chris Spyrides, and – recording all for some ghastly commercial posterity, editor of company newsletter Alex, Haeleigh Royall.

In a carefully controlled and exquisitely elegant palette of black, white, grey and orange, with an occasional flash of green and blue, these characters lurch maniacally from Christmas party, to New Year’s Eve, to the cold corridors of business power, office and boardroom, with many visits to the men’s toilets, signally advertised in overt modern manner by a Duchamps-esque wall-mounted urinal fixed at one end of the traverse space, directly facing the human-sized portrait of the ageing patriarch. Ben Jacobs lights it all with sympathetic beauty. The sound design is also by the incredibly talented Mr Hertford, and it also tells the story, from the opening synthpop disco tapestry (all New Order – of course), through to the purring of a big city making money beyond the windows.

The genius of this work is that it opens up to us what is really great about the writer: his vision of humanity, his craft as a composer of lyrical epics of the struggle of people to find their way in a world full of dangers, challenges, betrayals, confusions and blind-alleys. It leaves you knowing that you will never be able to think about the creator of Peer Gynt or Mrs Alving in the same way again. And you feel so very, very glad about that. At last.