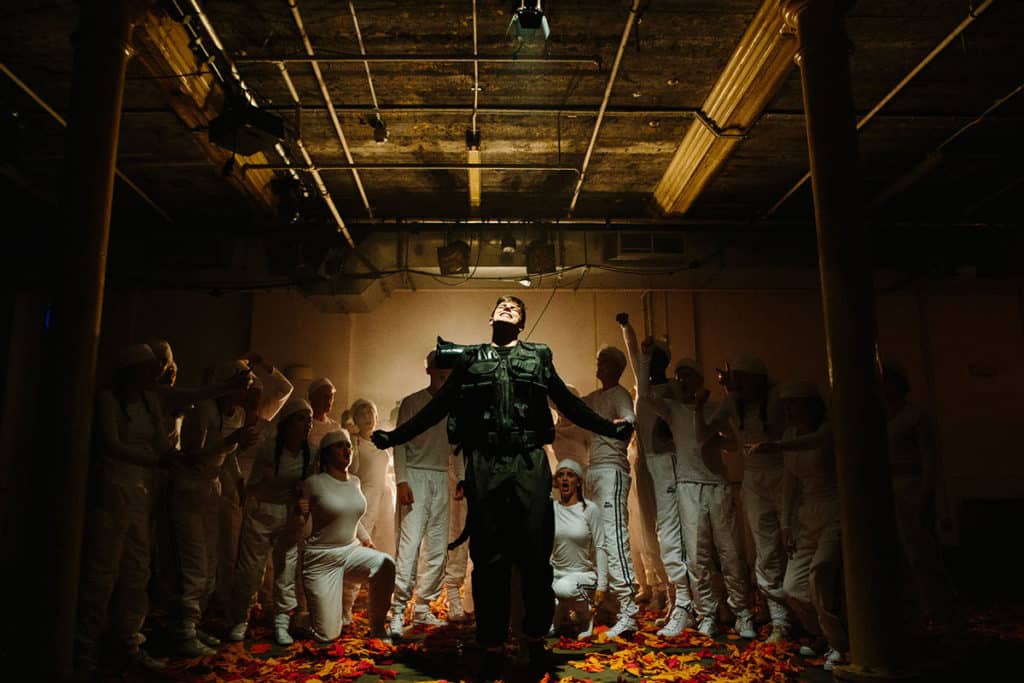 This is probably the biggest musical theatre event of the year. And I choose my words carefully. YMT is an acronym that appears with increasing frequency in the performer and crew biographies in theatre programmes, listed under ‘Training’. It has a place alongside the best drama schools in the country as a crucible of new talent. And, as a producer, it is a force increasingly to be reckoned with in the commissioning, development and promotion of original new dramatic work. And this summer it staged a magnificent new work that is unlike anything most of us have ever seen.

Last winter, I glimpsed a fragment of YMT’s 2015 dance drama, ‘Sweat Factory’, in the Christmas concert selection of extracts presented at the Salvation Army Hall on Oxford Street. I was so impressed by what I saw – and heard (Rachel Birch-Lawson’s choreography to Garth McConaghie’s musical setting of Aoife Manix’s libretto), I knew I absolutely had to see anything this company did in the same form.

So, as soon as ‘The Dark Tower’ was announced, with the same fascinating choreographer again working with her regular associate choreographer, Khyle Eccles, I rushed to book for it. I think now that was one of the best decisions I’ve ever made.

Conor Mitchell, a theatre maker from Northern Ireland, who uses music, text and narrative to create his work, has written an astonishing response to the 1946 Louis MacNeice radio play of the same name. The origin of the play is itself eloquent: at the start of the first year after the end of the Second World War, inspired by Robert Browning’s poem, ‘Childe Roland to the Dark Tower Came’ (which in turn has its roots in Shakespeare’s ‘King Lear’), the BBC’s Home Service asked MacNeice for a verse drama on the subject of man’s relationship with warfare, and ordered a score for it from Benjamin Britten. It was a work born out of immense suffering and sacrifice, in a world where turmoil and conflict seemed unending. It could hardly be less relevant today.

Now, if these are names that we do not necessarily associate with contemporary musical theatre, then that is because this work takes us beyond what we usually do, and think of.

What Mitchell has written is more than infused by the spirit of Britten; it opens with characteristic fanfares and flourishes, delivering a bold choral tutti in a broadly tonal frame, instantly reminding us of the composer of everything from ‘Night Mail’ to ‘War Requiem’. He shakes our certainty of where we are and what is happening with surprising twists and jerks in the harmonic contours. He blasts us with antiphonal echoing choral groups, which resound like cannonades in the industrial building that houses this performance. 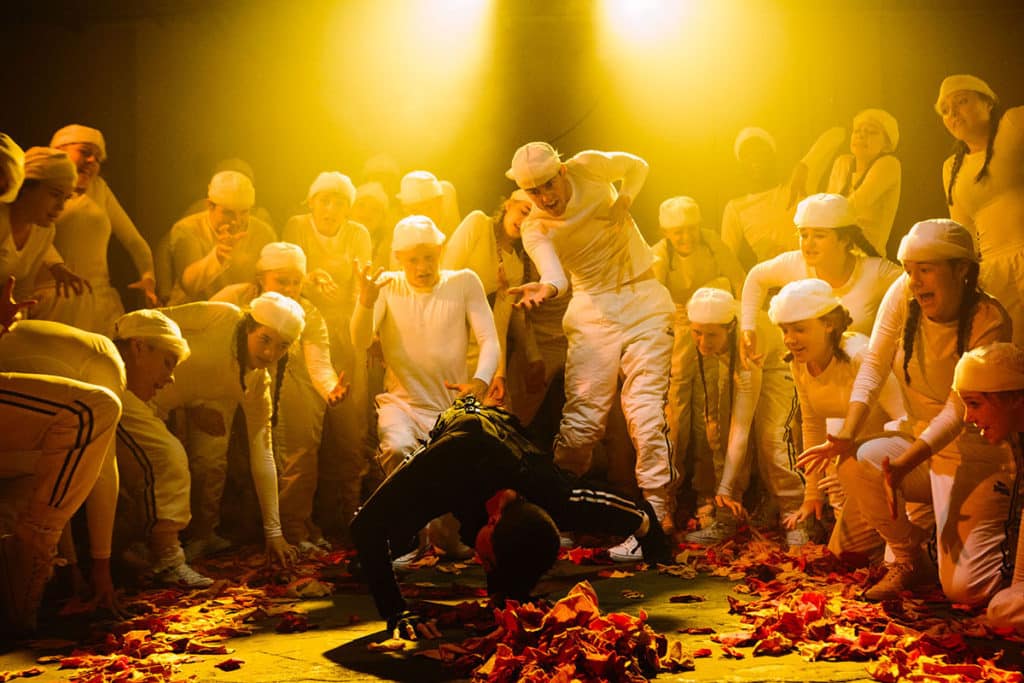 And that’s when we notice another affinity: the character of Britten’s successors, notably Michael Tippett, push forwards and become other characters in this musical adventure: as the work progresses, we could almost be in the midst of ‘A Child of our Time’, in chorales of heart-melting beauty, or in the drama and dangers of the Second Symphony. It is exhilarating. It is startling. It is also the boldest, most original score you will hear this summer, apart from Andrew Lloyd-Webber’s 1970, ‘Jesus Christ Superstar’.

We set out upon a kind of Pilgrim’s Progress of The Unknown Soldier. Consciously styled by MacNeice as ‘a fable’, the Soldier is his central figure sent out on a quest. In Rachel Birch-Lawson’s production, the journey, the search, the mission, is represented through endlessly reconfiguring groups and ensembles. Indeed, she relocates us up the stairs of the building to progressively higher levels: the second room is smaller, and choked with transparent plastic bottles: the third and final level is an abruptly different black box, with black rostrum steps leading up to a stylised pavilion-esque tower (or, is it the dust cloud of an atomic explosion?). The duration of each stage contracts, with the last being brief and exquisitely poignant.

All this barely suggests the astonishing sensual assault of the lush music, and the elegant, precise and so warmly human movements used to give it shape and direction. The amount of text to be sung means this isn’t a ballet. And the vigour and beauty and energy of the movement means this isn’t an opera. And the story itself is so poetically stylised – in locution and structure and intent – so that means this isn’t really a drama, either. If anything, it is perhaps a kind of danced oratorio. It is the elaborated expression of a serious, almost lofty, topic, but this is modulated by the frank youthfulness of the people presenting it (including the five musicians playing in the band – clad in uniforms exactly like those of the dancing and singing and speaking ensemble). The vulnerability of their years, and the intensity of their involvement with every last detail of the work, the overpowering force of their commitment to the story they are telling, and to the extraordinary means they are using to tell it, are as electrifying as they are fascinating. You conclude that if you can say anything about what this is, you can say: this is new.

At the same time, a strong visual language is created in Sophie Barlow’s sleek design of a mainly white environment, shot with flashes of red, and with the central, black-clad figure of the Soldier. In this world, a company of 35 girls and boys of between 13 and 19 years of age tell us the story – using MacNeice’s often archaically poetic language. And – imagine – these children had just a fortnight to learn 60 minutes of musical material, with dozens of musical ensembles, many using complex fugal patterns, stretti, and so on, and demanding an immensely high level of concentration. In addition to that, all the movement had to be learnt, including lifts and jumps, and 30 minutes more of transitions shifting the audience from place to place, and they had just one day in the 3-storey building to prepare for the arrival of that public. Yet, even though the writing for voices is demanding, every single one of the company is more than a match for it: they sound as full and as convincing as a fully trained and well-practised chorus might, under the expert guidance of MD Richard Healey. All the company have their individual moments, too, whether choreographic or vocal. MacNeice creates a long cast list, and these appear along the epic journey of the hero.

Supporting this, the scoring is impeccably detailed and alert to all the implications of the text: Mitchell is a genius of theatrical colour in the way that Britten, and befoe him Puccini, was. And the orchestrations are his work, too. The musicians, following the superb supervision of Francis Goodhand, play with a breath-taking command of his material, especially the trumpet of Cat Johnston, who has one of the longest and most difficult first trumpet parts I’ve heard (and she plays three performances a day).

Given all these wonderful things to notice and enjoy, would it surprise readers to learn that – so far – there seems to have been little or no press coverage of this unique achievement? That seems difficult to understand, especially with such an abundance of things to love. This incredibly wonderful work deserves the close admiration and encouragement of the nation’s media, and of all arts organizations who want to support and be a part of the most exciting development in musical theatre in this country in years. We need to try and catch up with the awesome pace that YMT is setting.