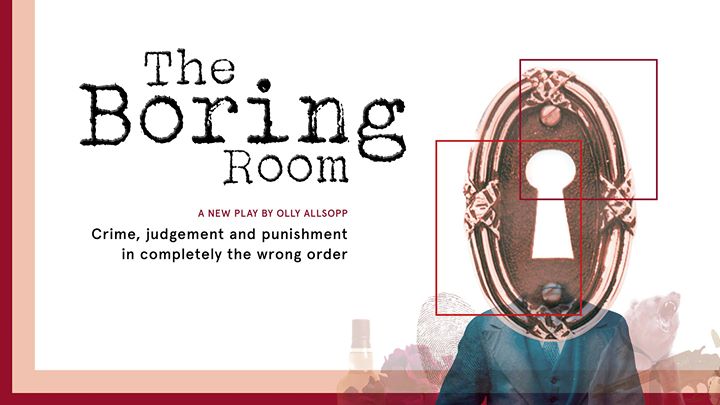 Perhaps someone is playing an elaborate joke on us with this depressingly titled event, but the director, Tom Crowley, was rather keen for me to go along and review it.  Having now seen it, I cannot understand why.  Nor can I understand why he felt the script was worth producing.  And I can but wonder what good actors like Emily Stride, Jamie Laird and Michael Keane were thinking when they allowed themselves to be prevailed upon to lend their talents to its, um, delivery.  It is hardly worth all that effort.  And, if you’re thinking of going, think long and hard before you do.

The person who has written the script, Olly Allsopp, has come up with the not very original idea of dragging together a convention of thriller and crime writers and – three at time – he has them chat to each other, much in the manner of Sartre’s ‘Huis clos’: three mismatched individuals stuck in a room that lacks any kind of specific character and whose lives are similarly devoid of substance and weight.  But there, it has to be said, there all similarities with that masterpiece of existentialism end.  Instead, rather than entangling ourselves in the personalities of three individuals who might easily stand in for us, we are left to listen in, at a considerable distance, to the coolly passionless exchanges of actors impersonating great artists.

If you are going to play Baron Frankenstein and bring back from the dead noble spirits, and reanimate them in your own image, then – like that meddling amateur biological engineer – you’d better have a very good reason for doing so.  But what is Olly’s?  I have absolutely not the faintest idea.  In the first, ah, ‘play’ (this is touted as being a ‘trilogy’, which does sound rather grand), Stride gets to take on the label of ‘Christie’.  But which one?  There was nothing in her lines that seemed to anchor her in the world or mind of the creator of scores of brilliant murder mysteries.  However, she did seem – fleetingly – to resemble that other Christie in a drab, eventless drama, you know, the one who Howard Brenton describe as being ‘in love’.  That, potentially, could have been an interesting direction to go in.  But no.

Meanwhile, Laird had to be addressed as ‘Doyle’.  So, inevitably, I kept wondering where Bodie was.  And then it dawned on me that he was supposed to be Sir Arthur Conan (not the Barbarian) Doyle.  That Doyle.  Oh.  In which case, why would Agatha Christie have addressed him in such a clumsy, oafish way as ‘Doyle’?  I think she would have called him ‘Sir Arthur’, don’t you?  In fact, I feel sure she would have done.  She was far too well brought up to do anything less.  But, plainly, Allsopp couldn’t care a fig about such niceties.  But if you’re not interested in things like that, why concern yourself with Mrs Christie (who is all about little snobberies of social status and how they imprison the mind, and so on)?

I haven’t the faintest idea.  It just became increasingly annoying to sit in a theatre, being plagued by such obvious, common-sense questions, and to have to reflect that the penner of this text had thought such enquiry beneath him.  Well, if he didn’t care about that, why should I care about what daft utterances he then stuffed into the mouths of his unfortunate actors?  Oh, and next he brings on another performer: Poe.  No: not Alexander, neither.  This was that guy from the USA.  Another delegate at the Greatest-Thriller-Writers-Of-All-Time convention.  And on it went.  And on.  And on.  Two more ‘plays’ of the same.  The poor actors having to take on more ‘personas’: Stride became ‘Violet’ and then ‘Iris’; Laird became ‘Adrian’ and ‘Louie’; and Michael Keane abandoned his non-telly-tubby Poe for ‘Lee’ and then ‘Max’.  And if by now you’re lost in all this character swapping, then join the club.  All these so-called ‘characters’ sounded exactly the same as each other.  If Olly has an ear for dialogue then it is only to hear his own voice.  And if the script gave the cast nothing with which to work to differentiate between their various ‘roles’, then Crowley could do nothing to help them either.

I hope they’re all being paid.

See our preview of the Vault Festival 2018