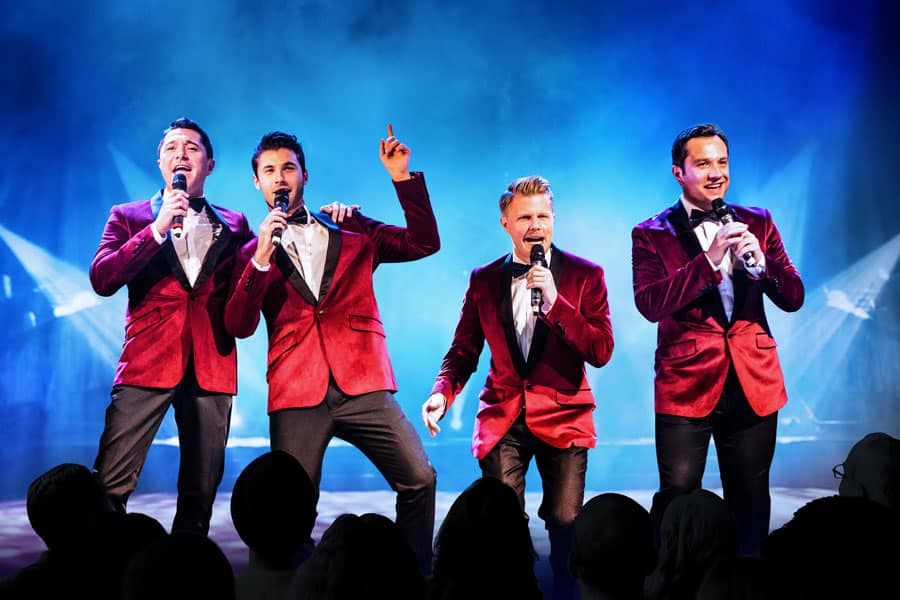 If there’s something that is guaranteed to make a festive season truly joyful, then it is a perfectly constructed and executed cabaret, and that is what you get – in spades – from this tightly focussed and intimately presented entertainment, designed, produced, directed and performed by a quartet of male alumni of ‘that’ long running show in the West End about revolution, dreams and bringing him home.  Since their foundation a couple of years ago, ‘The Barricade Boys’ have become a welcome addition to the occasional lighter end of musical theatre entertainment, with their well constructed and expertly delivered packages of the familiar and the much less well known, smart outfits, nifty stage moves, and a glamorously generous band of seven, as they have toured an interesting choice of medium sized venues around the country.  Now, a residency at this important smaller space in Victoria, with just a single piano for accompaniment, brings them to a metropolitan audience, before they head out to grace another batch of cruise liners with their pleasingly elegant and good-natured programmes of songs both serious and comic.

The current line-up – it changes from time to time dependent on artists’ availability – includes founder members Scott Garnham and Simon Schofield, with long-standing collaborators Kieran Brown and Craig Mather.  Tonally, they span a pretty broad range from legit semi-operatic grandiloquence, to intimate, microphone-enhanced pop vocals, and their arrangements – by back office regular James Doughty – exploits their every last ounce of personality and idiosyncracy, making every number come up fresh and surprising.  With some extra tit-bits penned by team BB stalwart Garry Lake, they even roped guest artist Michael Xavier into a quirky and hilarious take on ‘The Twelve Days of Christmas’, which made a super foil to the tall one’s own deliciously stratospheric arrangement of ‘Have Yourself A Merry Little Christmas’.  And always, keeping up the musical flow, is this run’s resident pianist, the inestimable Noam Galperin, as perfectly in synch with these guys as you could possibly wish a pianist to be: all six of these chaps seemed minted from the same material, and fit together perfectly.  Every night, though, there’s a different visitor, so be prepared for some surprises along the way.  And, yes, there will be some female artists guesting, as well as – for all I know – a more diverse range of performer, too.

Meanwhile, we got some popular favourites of the seasonal repertoire (‘Silent Night’, ‘The Most Wonderful Time of the Year’, ‘Let It Snow’, and so on), interspersed with some popular glories of the musical theatre canon (see the ‘Les Mis’ playlist), and some novelties (‘Sparklejollytwinglejingley’ from ‘Elf’ was a particularly delightful moment).  Threading through this, there were some rock’n’roll faves (‘Johnny Be Good’, ‘Man In The Mirror’, amongst others), as well as a simply show-stopping devil-may-care gallop through the tortuous by-ways of ‘Bohemian Rhapsody’).  And, and, and… there was more.  Scott Garnham’s inspired arrangement of ‘It’s My Life’ took the breath away, as did the cover of the David Friedman and David Zippel number for Nancy La Motte, ‘Just In Time For Christmas’.  Even more striking was the rendition of Journey’s ‘Open Arms’.

So, a clever, thoughtful and artfully composed evening neatly dove-tailing with all festive requirements.  You could hardly do better than to spend a couple of hours in the company of these fine entertainers.  Advance booking is recommended.  They play up to the 23rd December.

BOOK TICKETS TO THE BARRICADE BOYS