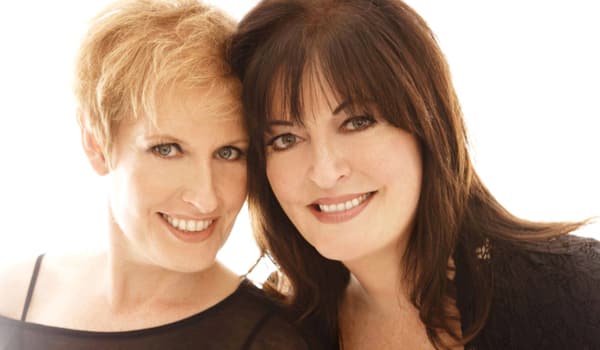 Life is all about new experiences and I can safely say that I’ve never been asked for ID before when trying to get into a theatre. The Matcham Room is tucked away within the Hippodrome Casino, a cornucopia of gambling and excess near Leicester Square. This intimate venue has hosted a series of stars over the years and tonight it was the turn of the Callaway Sisters and their Sibling Revelry cabaret show.

The Callaways are theatrical royalty; Liz, a frequent collaborator with Stephen Sondheim, is a veteran of several Broadway shows, with a Tony Award nomination to her name. Ann has performed for Clinton and Gorbachev and written songs for big names including Barbra Streisand, Cole Porter and Carole King. It is the first time they have performed in London for seventeen year and some of the audience had clearly been eagerly waiting their return.

They have a fearsome pair of voices, with different styles which complement each other perfectly. Liz sounds more like a traditional Broadway performer, with a fantastic vocal range and an ability to switch between emotive ballads and more lively numbers. Ann has a powerful and soulful voice, with a belting lower register, capable of bringing any show tune to life. Despite the pair’s lengthy careers, their voices are still in great shape and when they were in full flow, backed by a barnstorming house band, it was impossible not to get swept along with the fun.

The set list was an interesting mix of emotive show tunes, big band crowd-pleasers and folksy duets. There was also a brilliant Forbidden Broadway style pastiche of Sondheim entitled ‘Another Hundred Lyrics, in which Liz mocked the difficulties of dealing with the composer’s notoriously tricky lyrics and modulations. The show rounded off with an inspired medley, incorporating elements from a range of musicals, including Wicked, Chess and Chicago.

Sacrilegious as it may be to say it but the whole sisterhood shtick did wear a bit thin; their voices are both so strong that you want to hear them belting out as many classics as humanly possible, rather than cosy duets about love and sisterhood. Indeed, I actually preferred the solo songs that were neatly divided between the sisters– each singer was able to show what they can and concentrate on the material in front of them.

Liz has a haunting and tuneful voice; her double whammy of Meadowlark from Company and My Heart Is So Full of You showed exactly why she was nominated for that Tony. Ann absolutely dominated her solo numbers, with her strongest moment being a version of Don’t Rain on My Parade which her friend Barbra Streisand would have been proud of.

The sisters had great stage presence and a strong rapport with the audience. They were self-deprecating and funny when they needed to be but also had a clear love and respect for each other. The patter much improved when they started talking (and singing) about their respective career journeys rather than the sisterhood gags that were weaved through most of the first half.

However, some of their set could have done with a bit of translation for the Limeys in the crowd – there were a few references that didn’t quite translate. A good example is when the pair performed the theme tune Ann composed for the US sitcom The Nanny; despite my tender years, I am sure I am not the only one who had never heard of it – it could have perhaps done with a bit of context.

Sibling Revelry is nothing revolutionary or groundbreaking and nor does it claim to be. However, if you’re looking for some top class performances from some Broadway veterans then you can’t go wrong with the Callaways – the true sister act.

Sibling Revelry runs at the Hippodrome Casino until 11th July 2015