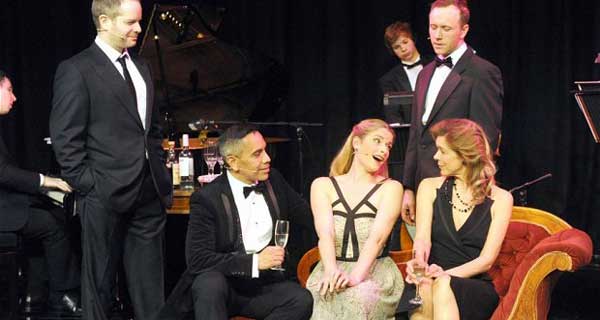 One occasionally loads the CD player with different recordings of Sondheim shows or Sondheim celebration concerts and chooses the shuffle option with the result that often there can be jarring juxtapositions of Sondheim songs and styles (think Pretty Little Picture followed by Moments in the Woods followed by A Weekend In The Country) because Sondheim always finds a particular style for his musicals and they can be very very different.

In facile or ill-thought-through productions, the Julia McKenzie/Cameron Mackintosh/Sondheim devised revue, Putting It Together, can be that kind of experience: jarring but familiar, curious rather than connected, odd more than satisfying. Tonight, at the St James Theatre in Victoria, to a capacity house which included Angela Lansbury, Alex Parker’s production of Putting It Together, directed by Alastair Knights, choreographed by Matthew Rowland and Scarlet Wilderink and with musical direction by Theo Jamieson and Alex Parker closed after a successful run.

This production did not fall into that or any trap; rather, almost seamlessly and without fuss or an imposed directorial “concept” it just went out its way to deliver the goods. And it did. Triumphantly.

The premise of the piece is simple: a glamorous party at which a married couple find their marriage tested and a younger couple wonder why they are there together and a cute, funny guy watches these couples and occasionally comments on the couples or interacts with them. And this all occurs while a wild tapestry of Sondheim’s lesser known (mostly) canon is put into the spotlight.

One of the things this Revue brings into sharp focus is just how completely assimilated into popular culture Sondheim has become. Even the most obscure numbers in the song list here seem, somehow, familiar and comfortable. The most familiar ones, such as Ladies Who Lunch and Marry Me A Little, strike you as Number One hit tunes. The audience was filled with people who “did not know Somdheim wrote that”; not, to be clear, La Lansbury.

The music was skilfully arranged for a small ensemble: piano, oboe/for anglais, clarinet, bassoon, double bass, and trumpet. And each of the players was meticulous and talented. Theo Jamieson’s work on the piano was particularly impressive.

At the epicentre of the production is a glittering, utterly fabulous performance from the sublime Janie Dee. She delivers in every way possible. She is the epitome of sex in her killer black dress and she manages blithe comedy as well as heart-wrenching pain in the more devastating numbers. Her delivery of Lovely dripped with acidic venom; her Every Day A Little Death pulsed with trembling sorrow; Everybody Ought To Have A Maid was a delicious sex-charged frolic; Could I Leave You, Ladies Who Lunch and Not Getting Married Today – each fresh and revelatory, as though no one had ever performed them before; Like It Was shimmered with unrelenting pain and sorrow and the wonderful duet, with Caroline Sheen, There’s Always A Woman, proved to be the most sumptuous and delicious treat of the evening.

Dee is unafraid as a performer. She sings and performs with searing honesty and a clarity of understanding which imbues every line, every phrase, with joy, authenticity and killer specificity. She is not afraid to use the crack in her vocal line to excellent effect and she knows how and when to change register for best vocal effect.

Happily though, she was not alone.

Damian Humbley was in truly excellent voice and his perfect delivery of Marry Me A Little and Unworthy Of Your Love showed, in a very clear way, his resonant, powerful and quite remarkable ( and unerringly accurate ) tenor voice. It was difficult not to want him to sing every song allocated to a male. This was especially so in the case of Good Thing Going, here sung by David Bedella but, alas, not nearly as well sung as Humbley had delivered it in the 2013 production of Merrily We Roll Along. Indeed, the best singing of the evening came in Humbley’s faultless delivery of the poignant and truly beautiful Pretty Women. In every way, he put no foot wrong.

Equally, Daniel Crossley was simply terrific in the song-and-dance man part: he lit up the stage every time he took to it. It is difficult to imagine that anyone anywhere could deliver Buddy’s Blues better than Crossley did here: he was inventive and dynamic, finding new and sizzling ways to make the song spectacular. This was also the case with his work with Dee in Everybody Ought To Have A Maid and his opening number, The Invocation and Instructions To The Audience. He might not be a singer in Humbley’s league, but he is a spectacular performer.

Also in the truly lustrous corner was Caroline Sheen, who played the ingenue to absolute perfection. Her Lovely was magnificent as was her Live Alone And Like It. She shone in her work with Dee especially.

Only David Bedella seemed outclassed and miscast in this company. His voice is not the true bass-baritone that brings that special quality to numbers such as Pretty Women, The Road Not Taken and Hello Little Girl. Unlike his fellow cast members, he was either out of tune or out of depth more often than not. Which is puzzling, because he can be wonderful in the right role. Even in Being Alive, a number which ought to have been utterly within his grasp, there was disappointing tone and an almost complete lack of electric precision. In every way, this was puzzling and disappointing.

But it made no real difference to the overall impression of the evening. This really was first rate entertainment and completely deserved the standing ovation that greeted the cast when the closing number, Old Friends, brought an end to proceedings. When they all sang together, either in unison or harmony, the five performers were delightfully in sync, listening to each other and working beautifully together. This was ensemble work at its most compelling.

Full marks to Knights and Parker: their vision for this production, crisp, clean and clear, was precisely right.

This Putting It Together deserves to transfer into a central West End theatre and play to packed houses seeking pure, joyful entertainment.