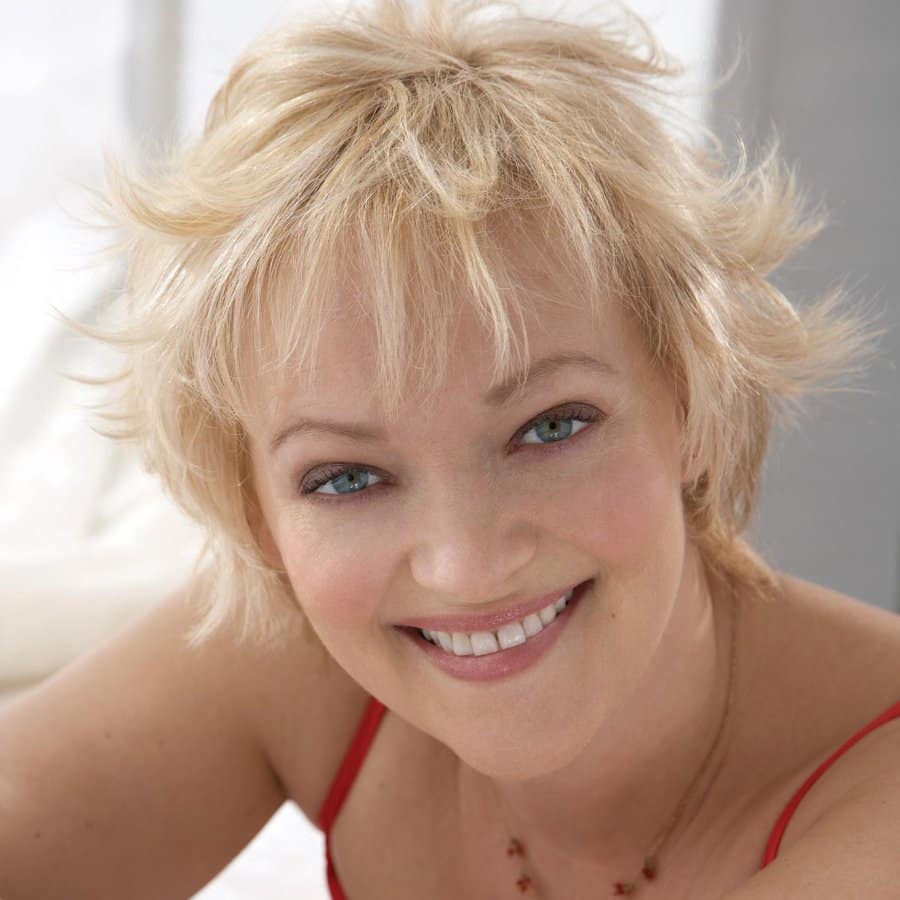 You don’t so much leave at the end of this concert, as sail away from it on a wave of euphoria.  By the close of this first instalment of a mammoth three-and-a-half week residency at Café Zedel’s intimate Crazy Coqs cabaret bar, the doyenne of British singing-actresses/acting-singers had transported her audience far from the everyday concerns and into the heady pastures of the fondest dreams and tenderest moments of the heart and soul.  Maria Friedman is used to doing this at New York’s Gallagher’s, where she masters six-week stints with aplomb: so Artistic Director of the Crazy Coqs, James Albrecht, has placed the introduction of this innovation at this London address in safe hands.

First on stage, though, was pianist and arranger Jason Carr, a long-time collaborator of Miss Friedman’s; his vivacious overture set the brilliant tone of the evening, alerting us to the menu of Bernstein and Sondheim (plus associated collaborators) that was to follow.  And follow it did.  We began with a neat New Yorker mash-up of ‘What More Do I Need?’ and ‘Love Me, Love My Town’: the latter, although not about NYC, heard in this context so perfectly describing the reality of life in Manhattan – the thesis of the event was to demonstrate what thorough-going devotes of the cultural capital of the USA we find in the works of Lenny and Steve.

Some free-wheeling chat with the audience, and cleverly laugh-provoking banter across the grand piano, relaxed the packed room, propelling us into another of Friedman’s signature moods: pensive contemplation.  Her vocal control in ‘Lonely Town’ was quite delicious, side-stepping any overt sentimentality (this she held in astute reserve for the closing stages of the recital), and it gave the forthcoming production of ‘On The Town’ at the Open Air Theatre Regent’s Park one of many – doubtlessly fortuitously accidental – plugs.  Yet, the stage art of this performer is such that she didn’t just let it stand at that: instead, we got an extraordinary mix-in of ‘Another Hundred People’ from ‘Company’, counterpointing her powerful lyricism with an equally precise social panorama, re-energising both well-known works.

Currently also directing ‘Stepping Out’ (playing in the West End right now) and with a new musical play, ‘Dusty’ (written by Jonathan Harvey) soon to open, Maria Friedman is also known for her superb masterclasses and espousal of telling stories through song (and also, as we got from time to time here, dialogue).  Thus, even with a simple ‘list’ song like ‘A Hundred Ways To Lose A Man’ (from ‘Wonderful Town’, a show seen recently at Ye Olde Rose and Crowne), there is more to the situation than meets the eye.  Then again, who else could pair up that show’s ‘I’m A Little Bit In Love’ with ‘In Buddy’s Eyes’ from the extremely different ‘Follies’ (a show awaiting a much heralded and long anticipated revival at the National this autumn)?  Or, who could make them merge into ‘I Have A Love’ from ‘West Side Story’?  Always, Miss Friedman is ahead of the game, and like a gifted director encourages us – as her cast – to try and do the thinking, or discovering, for ourselves.

We also have to stand in awe of her astonishing ability.  Disarmingly drawing attention to the technical pitfalls crammed into ‘Getting Married Today’ (again, from ‘Company’), she then launched into a devastatingly flawless rendition of the tale of the reluctant bride (complete with veil) – with a warm-hearted intervention from Mr Carr’s groom.  This brought well-deserved shouts of acclaim from the crowd.  And then she surprised us further by ever so quietly drawing us right inside the same show’s ‘Being Alive’, presenting it as a tiny chamber piece, quite differently from the grand manner afforded it in most performances.  With the audience firmly nestled in the palm of her hand, we then got Bernstein’s Ned Rorem-esque ‘So Pretty’, an acerbic yet delicate anti-Vietnam War protest song (but hardly out of fashion yet, with any number of desperate conflicts still raging around the world, not least on the streets of our own cities).

Then we got a chance to inhale again with the splendid ‘Take Care Of This House’, a song made famous in this country by another great singing British actress, Patricia Routledge.  And that took us to the wise, ‘Children Will Listen’ before humour poked its head up again for (‘On The Town’s) ‘And I Can Cook’.  While we were laughing at that one, we hardly noticed Jason Carr tip-toe into the sublime introduction to one of this star’s greatest showpieces, ‘Losing My Mind’, which was minted anew before our very eyes, each syllable and subtle harmonic shift given bountiful nuance and profundity.  And that she capped with a lovely ‘Send In The Clowns’, full of adult awareness of the disappointments and frustrations of life, and their arcane if irritating beauties.

And finally, as promised at the outset, we got a stunning version of ‘Somewhere’, which Carr grew out of a light, gentle, almost carefree, tripping accompaniment, with his singer building it up gradually and ultimately giving it positively Streisand-like, stadium-filling welly.  That got the first standing ovation of the evening.  Then, to trump it all, on came more props – leather cap, cop’s hat, judge’s wig, and psychoanalyst’s specs – for a quick-change canter through ‘Officer Krupke’, including massed audience participation.  This gave us standing ovation No.2.  Which was great, but not quite all.  Finally, finally, finally we got another lovely number from ‘On The Town’: ‘We’ll Catch Up Some Other Time’.  Indeed, Miss Friedman, and Mr Carr, I hope we will.