With cinemas remaining closed, it’s no surprise that Oscar buzz is gathering around films that are streaming, and will be streaming soon. This reverential, faithful and powerful adaption of August Wilson’s 1982 play, one of his ten-play Pittsburgh Cycle, deserves to have that attention. In a Chicago recording studio, her band and manager await the arrival of Ma Rainey, and they philosophise, argue and discuss their personal histories, Tensions increase when the Diva like Ma arrives, insisting that her stuttering nephew speaks the introduction to the title song, and the play moves to a shocking conclusion, which I found unpredictable and genuinely powerful.

I would be very surprised if there are not at least two Oscar nominations, (and two wins) for this production. The first will be for Viola Davis who, always excellent, and winning an Oscar for her performance in another Wilson adaptation, Fences, is astonishing in the title role, undertaking a transformation. Openly lesbian, cantankerous and hugely talented, Ma is a part to die for, and she inhabits it totally. Fierce and standing her ground, even when she is wrong, Davis also makes Ma Rainey looked devasted when she is in repose, that singing is the only thing she lives for. She wears the scars of her experience, of the fight every woman of colour went through and still goes through, on her exhausted face, her weary glare, her flashes of anger. It’s a shame she isn’t in the film more, but it does reflect the play, Ma does arrive late and is in fewer scenes than the backing band, but every frame counts in this excellent performance. 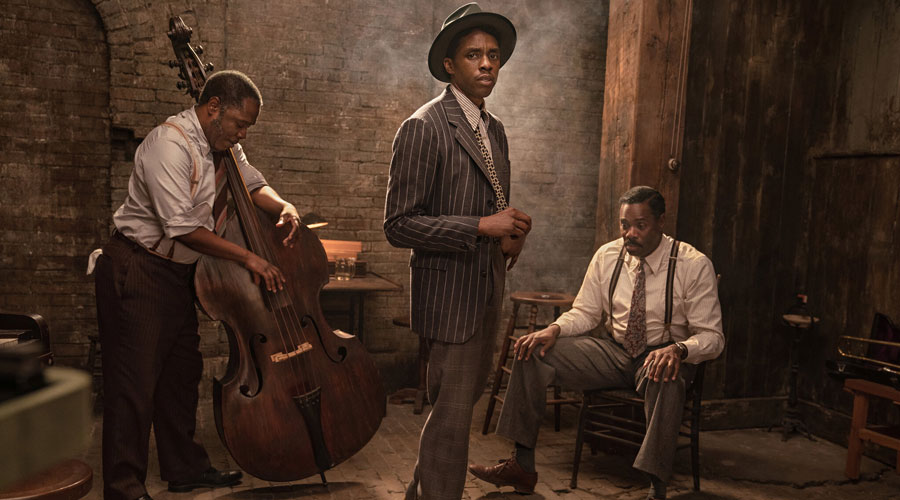 The second Oscar nomination could put Chadwick Boseman in that sad group of posthumous winners. We know now of his health issues while filming this, and it shows in his frame. But it does not deviate one iota from his passionate, compelling performance as Levee, the hot-headed trumpeter who has his own ambitions and will clash with Ma Rainey. Of particular power emotionally is his speech that reveals the gang rape of his mother that he witnessed when he was eight, and the retribution carried out by his father. It’s no coincidence that every room in the recording studio looks like a cell, they are all imprisoned by their past and by the terrible history of racism, and they do not escape its confines often. The writing is beautiful, the pace almost languid, but you realise it’s being wound up until history overwhelms them and Levee ruins any chance of a future for himself.

Excellent as those performances are, it’s an ensemble piece that is perfectly cast. I particularly enjoyed Glyyn Turman as wise pianist Toledo, Jeremy Shamos as Ma’s long-suffering manager and Dusan Brown as her nephew. Director George C Wolfe adds a scene of cultural appropriation at the end that really underlines the relevance of the play and film for today. Highly recommended.