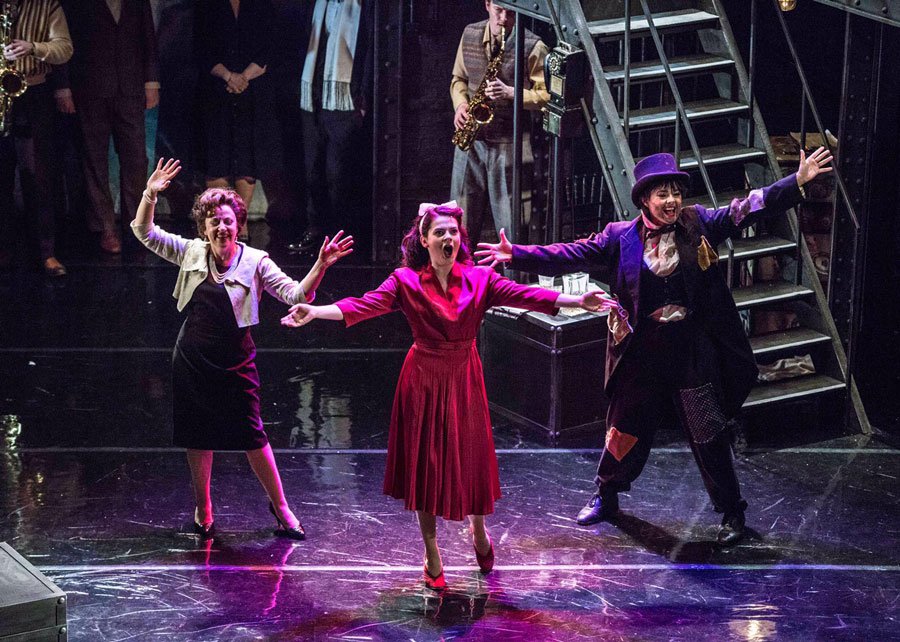 If there were ever a case of a show being utterly transformed by choice of venue, then this is it. This original biography of Judy Garland, a labour of love by the theatre’s founder and director, Ray Rackham, started as a small-scale fringe play in the old 60-seater London Theatre Workshop space above The Eel Brook public house on the New King’s Road; there, it was involving and surprising, with its criss-crossing telling of three different narrative strands, each taken by a different actress playing the lead, and with actor-musicians accompanying themselves and each other on a set made up on showbiz paraphernalia and knick-knacks. Then, emboldened by its success, the vigorously re-worked production transferred to the large 240-seat space at Southwark Playhouse, where it was given in a thrust-stage configuration, again with the audience feeling involved and emotionally at one with the central destinies of the title figure. The production attracted widespread interest and ecstatic reviews. It seemed nothing could stand in its way.

And now, although few productions seen at the Southwark Playhouse – even the very successful ones – ever do so, the show makes a further transfer to the West End, taking up residence at the 350-seater Arts Theatre. Rackham also produces, with Michelle Hutchings, and in collaboration with Julie Clare, who is also 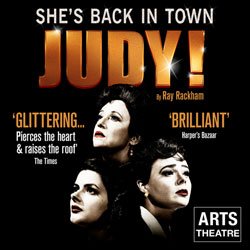 General Manager. The show has undergone further reworking, thanks to Dramaturg Carolyn Scott Jeffs, and obtained a new design from Tom Paris, which nonetheless preserves much of the original intention of the staging, to offer a generic studio space in which the different time periods and places demanded by the script can be conjured up with speed and flexibility. Almost all the original cast has been maintained throughout this long journey, and here they reprise performances that earned them abundant plaudits on Newington Causeway. The show should still be firing on all cylinders: the performances, especially the musical numbers, encourage the audience to will it to do so. Helen Sheals, Belinda Wollaston and Lucy Penrose (and, on the day I attended, the understudy Millie Hobday, promoted at a moment’s notice from her role as Costume Designer and Supervisor by the indisposition of Miss Wollaston) deliver beautifully observed and finely crafted renditions of hit songs from the Garland songbook. But something, it seems, has got in the way of the old magic. I’ve seen the show twice, and I think I may know what it is.

It is the proscenium arch. The effect on the reception of the play by the physical re-positioning of the performance vis-a-vis its audience is dramatic and definitive. From the audience’s point of view, we now sit in a darkened space, removed from the illuminated action; we now coolly ‘observe’ the events played out on the other side of the proscenium, without feeling nearly as involved by them as we did when we shared the same room in Chelsea, or surrounded the cast as at Southwark. Why? There are perhaps three main reasons: the style of acting; the nature of the direction; and the structure of the script. 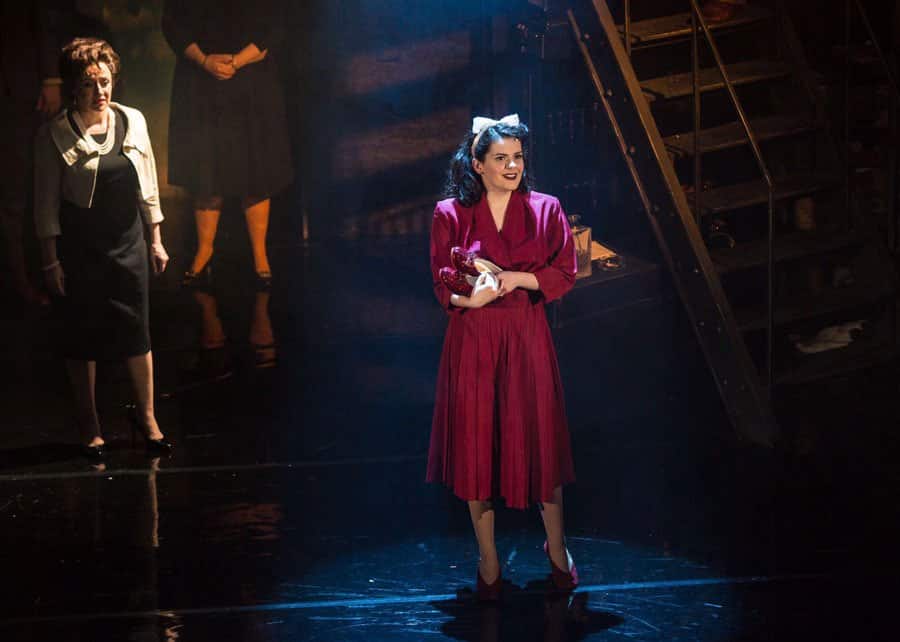 Much of the acting remains very similar to what it was in the previous venues. It doesn’t ‘fire out’ at us, unlike the delivery of the big musical numbers, which are still delivered with Garland’s trademark energy and vibrancy, her innate sense of showmanship and her urgent need to please her audience. Instead, we seem to eavesdrop on conversations, rather than get drawn into them. Some might argue that this should not matter – it should be possible to have a production where the script does one thing, and the musical numbers do another: well, the proof of the pudding is in the eating, and right now the dialogue passages are very much more muted in effect than they used to be. That’s a fact. Jokes don’t land as well as they did, because they seem to be shared with the actors onstage and not with the audience, and we don’t find ourselves able to ‘care’ about the characters in the same sort of directly emotional way that the musical numbers still proclaim. In other words, we lose touch with the core reason why we today still feel that Judy Garland matters. Direct emotional appeal was her raison d’etre. It’s the reason the play has been written and is being produced, and it is the reason why we have come to the theatre.

Then, there is the nature of the direction. Here, as previously, by Rackham himself, the direction is another factor that may be restricting the ‘reach’ of the production. To get across the barrier of a proscenium arch you have to help actors a lot, by arranging blocking, moves, lights, and all the other trappings of the production, with amazingly careful selection and precision of execution. When the audience’s gaze is so focussed on one perspective, seeing all the action ‘end on’, every single element of the performance is understood and responded to in a way completely different from seeing it ‘in the round’. Rackham, I’m sure, feels he has done everything possible to make that adjustment, but, on this occasion, I can’t help but reflect that, perhaps, things might have been different had an an entirely fresh pair of eyes, one more experienced in presenting musical plays in the West End, been engaged to effect the total reinterpretation of the show for these wholly different circumstances.

Finally, the script. The whole point of the book of this show is that it is not linear. That is fascinating when the audience is in the same space in which it is happening or wrapped around it. Here, however, when we are scrutinising its unfolding from a distance, we cannot help but note the immense stylistic gulf that lies between the script and the musical numbers that form its heart. Those songs, the famous hits that created the legend of the title, are almost without exception highly linear mini-narratives of the ‘golden age’ of American musical comedy. In the cut-up, scrapbook world of the script, they sit somewhat oddly, and they do rather appear to pull the audience in a totally opposite direction from where the script itself is. We get occasional moments of mash-up, or montage, but by and large the script and score work at aesthetic cross-purposes to one another, and this is thrown into stark relief by the unforgiving vantage point the spectators are required to adopt. 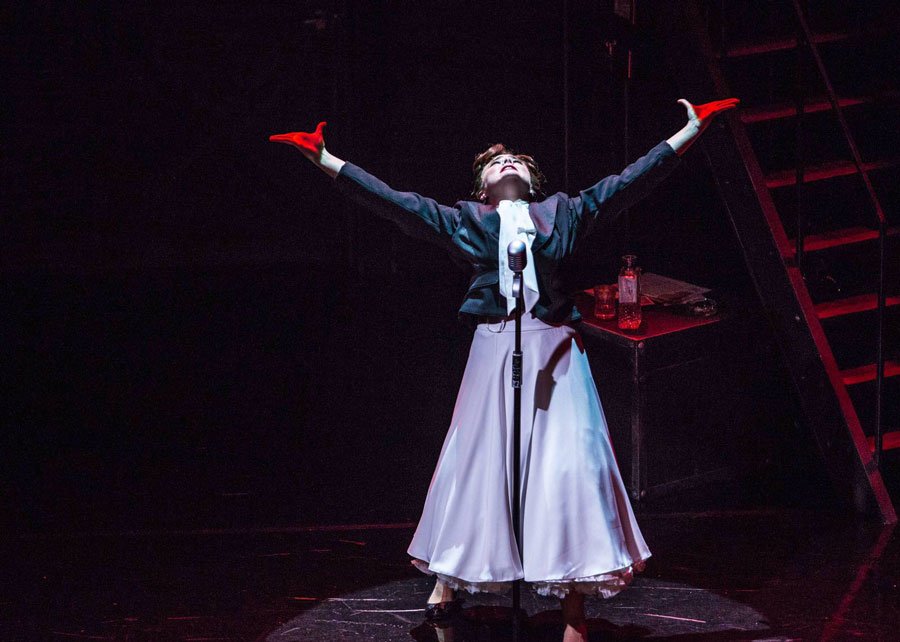 So, through a combination of performance style, direction and script, the audience, reluctantly, is forced to ‘sit in judgement’ on this play, even when all its instincts are wanting to abandon itself to emotional involvement with the love and humanity of the central figure. One can appreciate – intellectually – the story one is being told, but it is difficult to let one’s heart go out to it. People who are coming to the play for the first time are reporting similar responses; our head is appealed to here, not so much our feelings. True, some people are still moved to tears – by the songs – but I haven’t heard people making similar statements about the ‘character’ or what happens to her, still less by what she actually does for herself. If that is the deliberate intention of the makers of this show, then all I can say is that it seems surprising, given the extremely emotional singing style for which Judy Garland is famous, and which is so vividly recreated here.

The proscenium reminds us that this is, more than anything else, a play. There are some long scenes of music-less dialogue, and when it does come all the singing of the songs is done by the three leads only. Well, that’s not entirely true: from time to time, the rest of the cast is called upon to provide harmonies. The cast also provides music, from an array of instruments kept permanently in view on the stage; this didn’t seem to matter in earlier runs of the show, but here it can look a little strange, especially at the times when they are not needed for this purpose and they have to sit or stand by their instruments, sometimes for very long periods of time indeed. It’s not very clear why they do that. Simon Holt’s arrangements still sound wonderful, so we shouldn’t find this disconcerting.

Yet, the ‘language’ of the production remains rather mysterious, almost hermetic: for instance, why are there three different Judys and why do they sometimes inhabit the same space and – on occasion – even sing together? Before, it didn’t seem to require explanation, but now, somehow, we need to be told. And then why is it that one actor – Harry Anton – plays both the younger and older Sid Luft, almost as two entirely different people, while Amanda Bailey and Joe Shefer play Garland’s parents, Ethel and Frank Gumm, are locked into a single time-zone? These temporal inconsistencies, which seemed so charming before, now have a tendency to confuse. Why? Chris Whittaker’s choreography gives very welcome ‘lift’ to a handful of the musical numbers, but the vast majority of those onstage are untouched by it, standing around motionless, or walking, while one, two or three actresses do the dancing, which – for a West End show trading on the name of one of the greatest song-and-dance acts of the last century – may seem slightly eccentric. There is a big cast, also featuring Tom Elliot Reade as Roger Edens, Don Cotter as L B Mayer, Perry Meadowcroft as George Schlatter and Chris McGuigan as Norman Jewison, and even a four-piece additional band, mainly kept in the wings. But all these resources seem under-used. Again, we wonder why? The scrutinising gaze of the proscenium rather forces these questions, to which the production does not provide any readily available answers. Faced with a mystery, dangerously, the audience starts trying to solve it for itself.

Thus, when Christopher Dickens’ Hunt Stromberg Jnr so urgently tries to get Judy to comply with the CBS network’s demands for her TV show, the audience starts piecing together in its mind a trajectory for the show to take: is this the ‘goal’ the protagonist has to achieve? Or, when Carmella Brown’s Judith Kramer declares a yellow brick road has been painted outside Judy’s trailer in the studio, should we half expect the show to take us along that road, so we get back to Oz? In a sense, that is what the script does – finally depositing us in a full-bodied rendition of ‘Over the Rainbow’, with even the famous billowing clouds and wide open sky of the opening sequence of ‘The Wizard of Oz’ (the only ‘real’ footage in the whole film, which is otherwise – like this play – an entirely studio-bound construction). But, along that road, an awful lot of the other things that happen in the show are very difficult to rationalise. And there is so much naturalistic pressure in the show (TV ratings, opinion polls, focus group reports, scientific analysis, and so on) that we inevitably do feel a compunction to be rational.

Well, it remains to be seen what this does or does not do for audiences at the Arts. I think it’s worth a look, but it has ceased to exude the magic it once had.

BOOK TICKETS TO JUDY! AT THE ARTS THEATRE