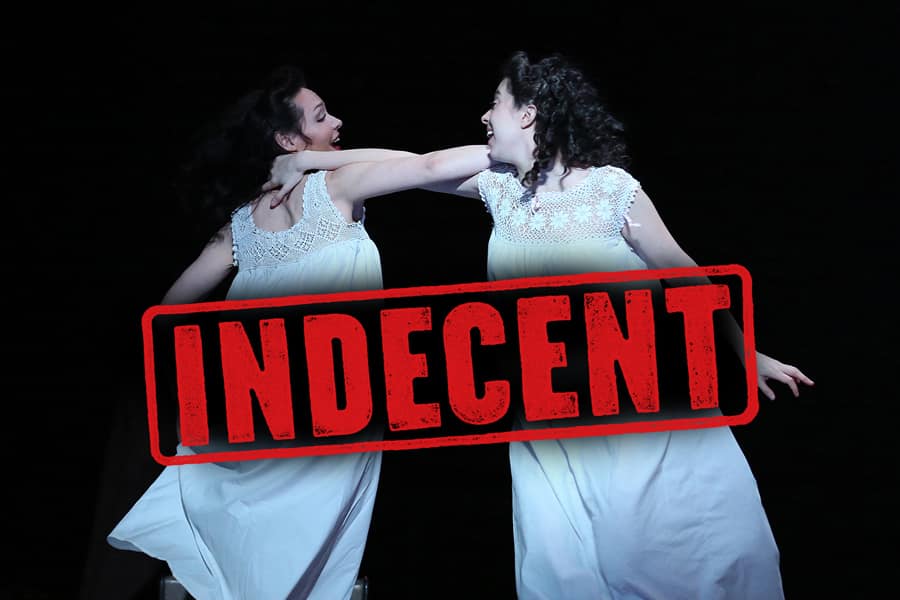 Paula Vogel’s extraordinary play charts the controversy surrounding the play God of Vengeance by Sholem Asch, in particular its first Broadway staging in 1923. A Jewish brothel owner busy a Torah to celebrate his daughter’s wedding to a scholar, but when he discovers his daughter has fallen in love with one of the prostitutes, he destroys the Torah and casts his daughter down into the brothel. If that wasn’t controversial enough, it’s a sympathetic portrayal of a lesbian relationship, (Although a key scene was cut for Broadway), and most of the cast were arrested on the grounds of obscenity. Vogel’s play could have just been about that incident and that period of the play’s history. But she beautifully charts the play from its first, nervous reading, in which only men read the play, through to a staging in an attic in the Lodz Ghetto, and the diminishing of Yiddish theatre.

Beautifully directed by Rebecca Taichman and David Horn, music is interwoven effectively  during the transitions and makes a strong statement about Yiddish culture and art. The troupe is outstanding, playing a variety of roles of a type attributed to them, for example, the writer will always play a writer. I particularly enjoyed Richard Topol’s sweetness and passion as the narrator figure Lemml, an advocate of the play from the beginning, who becomes the stage manager and takes us through to the heartbreaking line waiting to enter the furnaces of the Holocaust. Tom Nelis is wonderful as the legendary Yiddish stage actor Rudolph Schildkraut, but the whole company, including Katrina Lenk and Mimi Lieber, excel.

The strength of Vogel’s play is in its structure, holding back the full impact of the “rain scene” until the end, it’s repetition of the end of The God Of Vengeance, and, from a slow,  it builds to devastating climax. This is aided by the inventive direction, and, again, repetition of images. A queue at Ellis Island, in time, becomes a queue in a concentration camp. The economical subtitles help keep us in the timeline, and when the title “Ashes to ashes, the troupe return to dust” was projected, I was glad I was watching the show in private on my tablet so no one could see my tears!

Vogel’s play strongly defends art , culture, and, above all, love. By making that same sex kiss so important, she underlines that oppression will not win as long as love survives. A beautiful production.

Read other great reviews from BritishTheatre.com